The shortcut magic of mole paste

When I'm feeling fancy or want to treat someone, I make chilaquiles de mole with beans 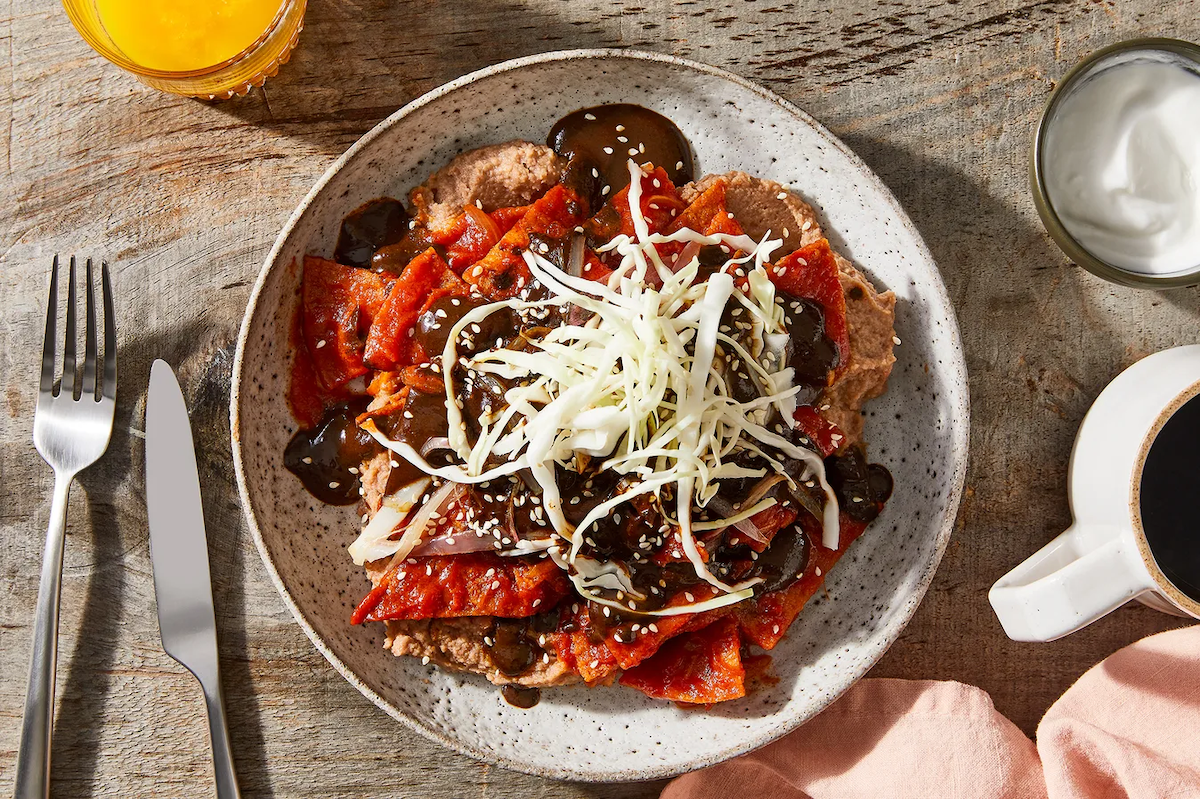 It was a languid and hazy San Diego afternoon, the sun lowering behind backyard trees and glimmering through windows, when I became acquainted with Doña María mole at my friend's house. We were sitting at the kitchen table, talking to her mom, when she announced mole was for dinner. I loved mole, but I had no idea how to make it.

I sprang up to watch her hands work, my eyes dancing as she simmered and whisked and doctored this complex, rich, mysterious sauce — turning a paste into a feast. She laughed when I asked "peanut butter?" as she spooned some into the sauce. It nicked the heat and gave the flavor some backbone. Sugar was folded in, encouraging the mole to sweeten, balancing the nuttiness and spice. The Doña María jars, with their signature octagonal base, were rinsed and reused for water, juices, licuados — the iconic mark of a home that regularly delighted in this comforting paste.

A few years later, my grandma, whom I have always known as Tita, told me to add Nutella to mole (on top of the peanut butter). I thought it was her commercial American sweet tooth talking — my Tita is someone who drank Coca-Colas daily and had boxes of sugar packets stowed in her pantry — but I obliged anyway. I, too, like my black mole sweet. And though I didn't understand it then, both the Nutella and peanut butter now make complete sense: Nuts and cacao are inherent in a black mole. These pantry items only enhance them.

A Mexican mother sauce, mole is parent to a bunch of dishes and sauces, from enmoladas to pollo con mole, romeritos, guisados, and more. There are myriad varieties and regional expressions, like coloradito, almendrado, poblano, mole amarillo, mole negro, mole chichilo, and many more. The word mole itself comes from the Nahuatl mulli, and it pre-dates colonialism — a sauce whose name means "sauce," though it is much bigger than any word could describe.

Mole, a labor of love often comprising 30 ingredients or more, becomes easy to articulate in a shelf-stable paste. The jarred concoction has been an umbilical cord to the land I'm from, finding me in grocery store aisles no matter my location. If I come across a special paste, I won't hesitate to cross the country with pints of mole in my checked luggage.

In the comforts of my kitchen, I open jars and blanket mole onto mushrooms (or cauliflower or squash) for tacos, or serve them with beans and rice, or use them as filling for tlacoyos or tetelas. I make enmoladas filled with beans, or flavor my tortillas with mole for quesadillas with oomph. Sometimes I mess up and make something new by mistake, like maíz tortilla mole crepes filled with sautéed squash and vegan cheese. But when I'm feeling fancy, when I want to treat someone, I make chilaquiles de mole with beans.

Doña María is the classic accessible mole paste in the Mexican pantry. So much so that even their empty mole jars have become iconic recycled glassware in Mexican homes. Andrea Nguyen wrote for the LA Times that the woman behind this historic jar of mole got her start in 1945 by knocking on doors. By doing so, Doña María Pons and her husband, Don Pedro Degetau, not only opened doors for themselves — they opened doors to so many others.

In this delectable Oaxacan mole negro, prunes and chiles come to the forefront. This Mexican-owned, San Diego–based spice and tea company also carries Oaxacan mole rojo, plus a mole veracruzano that's imported from Veracruz and handcrafted by extended family.

Aromatic, savory, and vegetable-forward, Xilli's mole poblano takes 30 ingredients and five days to make. Among their line of delicious Mexican salsas and accoutrements is pipian verde, an herbaceous green mole of Mayan origin made with a base of pumpkin seeds.

Found in Los Angeles' Grand Central Market, Chiles Secos sells an unimaginable variety — their moles are displayed like ice cream flavors and scooped and sold by weight. The nutty almendrado is a particular fave.

This jarred mole sauce cuts cooking time in half but with full-on, incredible flavor — especially the colorado, highlighting cacao and chile. Unlike paste, this sauce is ready to rock and roll from the jump, and it can be cooked on the fly, ready to coat tortillas or glaze guisados straight from the jar.