Antoinette's whole persona has also become a meme. "Excessive" men, however, have not received the same treatment 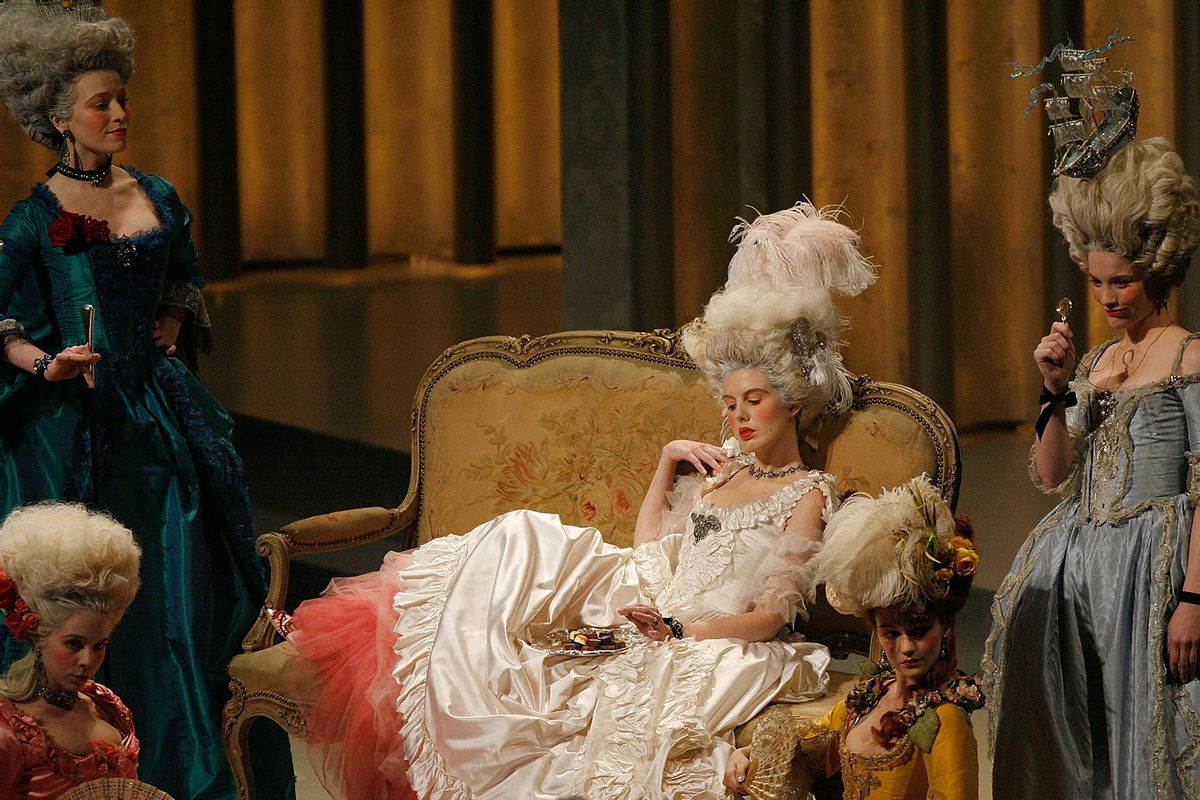 Costume sets from Marie Antoinette is seen onstage during the 79th Annual Academy Awards at the Kodak Theatre on February 25, 2007 in Hollywood, California. (Kevin Winter/Getty Images)
--

The hashtag #CarrieAntoinette, which compares prime minister Boris Johnson's wife Carrie Johnson to the French queen Marie Antoinette (1755-1793), has been criticized as sexist. Commentators feel it relies on gender stereotypes and distracts from unfolding political events.

Those events include the recent fines issued by the Metropolitan police to those who attended illegal Downing Street parties during the pandemic, including Johnson and his wife. Focusing on Carrie distracts from Boris's actions, which have made him the first prime minister to break the law.

Comparisons between the 18th-century queen and contemporary female figures are in no way limited to Carrie Johnson. Even in her own time the French queen's image was used for political gain and to comment upon the evils or good of women. Since then, Antoinette has become something of a pop culture icon, appearing across film, television and, more recently, social media in works that often seek to explore the performance of gender and the power that might accompany it.

Today's Marie Antoinette is a pastiche. Part historical detail, part cinematic influence, the Antoinette of popular imagination is regularly used as shorthand for the evils of excess, for femininity and indulgence. She is a queen steeped in centuries of myth and subject to constant reinvention.

From revolution to reinvention

Comparison on social media between Carrie Johnson and the ill-fated consort of King Louis XVI, executed by guillotine during the French Revolution, first appeared in 2020. This was in response to the Johnsons' controversial refurbishment of their Downing Street flat. Reportedly disliking the "John Lewis furniture nightmare" left over by previous prime minister Theresa May, the couple decided to redesign the property and install gold wallpaper at £840 per roll.

Marie Antoinette's own extravagances ran to near-constant renovations of her palace Petit Trianon. The easily drawn connections between Johnson and Antoinette prompted satirical artist Cold War Steve to share an image swapping the government flat for the throne room at Versailles, depicting the prime minister's wife in period clothing amid stacks of money.

During her own lifetime, Marie Antoinette's image was coded with political meaning and circulated both to assert and undermine the power of the royal family. During the French Revolution, in which the queen was imprisoned and eventually executed, her image appeared on both sides of the English Channel in sympathetic and critical renderings. Some images portraying her as a greedy aristocrat and others a noble victim. Satirical images often focused on the excessive hubris of the French court and the eventual dismantling of royal wealth.

Queen of the silver screen

In the centuries since her death, Marie Antoinette's image has been constantly revisited, often providing a mirror to reflect contemporary issues. However, her status as a pop culture icon was really cemented in the late 20th century.

The queen was invoked in Madonna's famous 1990 MTV Awards performance of her hit song "Vogue." In a wonderfully camp performance, Madonna used Antoinette's likeness to invoke the lavish ballrooms of 18th-century France to draw connections between the rich queer culture that voguing was born into. It was a highly stylised performance of femininity by male and female dancers alike.

Then there is Antoinette on screen. Actresses from Lise Delamare and Jane Seymour to Diane Kruger have all taken their turn in portraying her in films. Perhaps the best-known iteration today is Sofia Coppola's "Marie Antoinette" (2006) starring Kirsten Dunst. Indeed, the aesthetic influences of Coppola's playfully anachronistic depiction of the pre-revolutionary French court and the relationship between consumption and female power can be seen everywhere from Netflix's "Bridgerton" to drag.

It is this fictional Antoinette, with its exaggerated references to excess and luxury in relation to femininity and rich visuals, that has most influenced our contemporary digital iteration of the queen.

The excesses of femininity

Marie Antoinette has recently taken up court on social media. In another rendering of Carrie Johnson as the queen by Cold War Steve, we see Johnson bedecked in silk and reclining in a chair, surrounded by cakes and (a repeating theme for the artist) stacks of money. But rather than taking cues from 18th-century artists such as French painter Charles Le Brun, Cold War Steve's version of the queen is, instead, lifted from Coppola's 2006 film.

In this satirical image Johnson's face is imposed onto a cut out of actress Kirsten Dunst's body. Interestingly, Coppola's version of Marie Antoinette is based on a relatively sympathetic biography of the real-life queen by British historian Antonia Fraser. Certainly, the filmic rendition of her focuses on her humanity rather than infamy. But despite this nuance, Coppola's work — itself a visual amalgamation of innumerable pop and art history references — has proved to be fertile ground for social media users and content creators. The film's bold visual elements transpose easily to a recognisable shorthand for contemporary questions of gender and power.

Marie Antoinette memes and cartoons like the ones of Johnson are only going to multiply online as images continue to be layered, copied and pasted, sliced and filtered online to explore the supposed dangers — and pleasures — of "excessive" women. But what of the behaviour of excessive men? Do people remember Louis XVI of France in the same way? No. His reign is over and he doesn't figure in our contemporary cultural consciousness. But as long as there is a fascination with glamorous, powerful or even wayward women, it is likely that Antoinette will continue to command our attention for a long time to come.