The ghost of Watergate looms over Jan. 6 hearings: Will there be accountability this time?

Let's hope the Jan. 6 committee can lay out the story in such stark terms 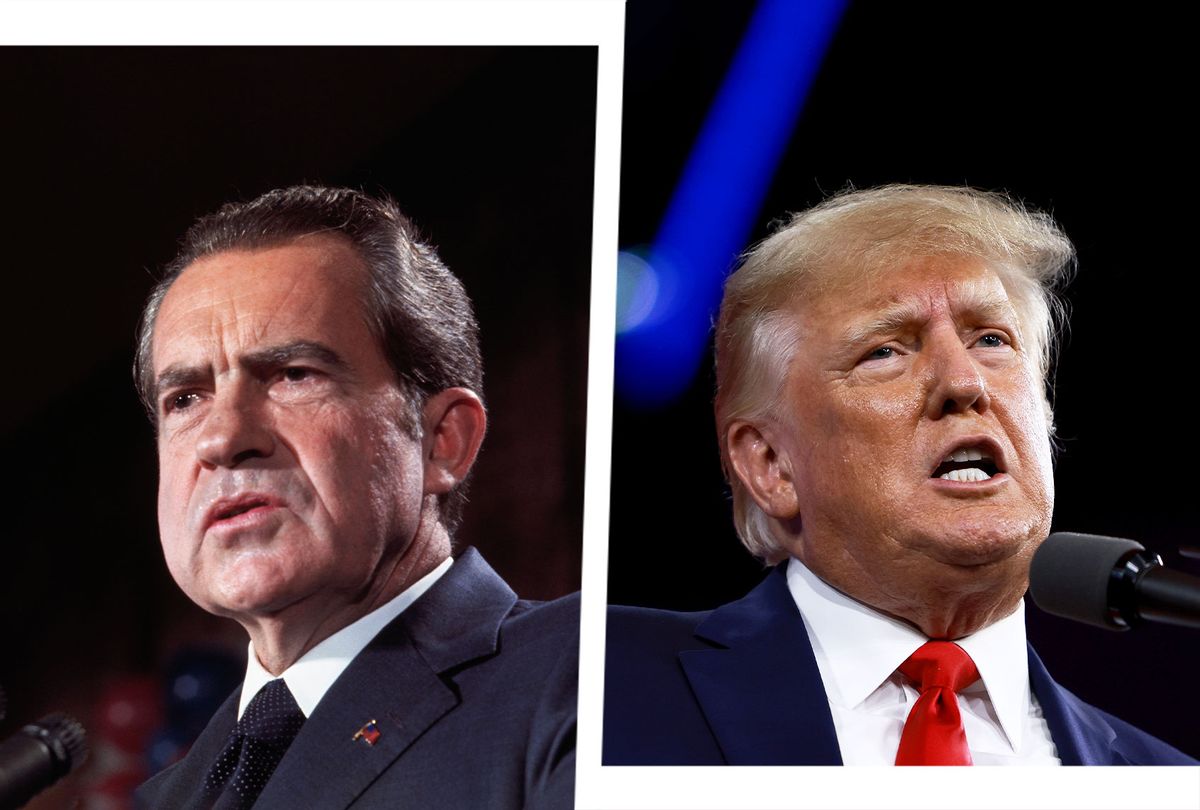 In a couple of weeks, the United States will "celebrate" one of the most shameful political events in its history: the 50th anniversary of Watergate.

The infamous break-in started out as what the Nixon White House dismissively called a "third rate burglary," but over the course of the following two years an incredible story of crude criminality, corruption, and even possible treason unfolded before the public, resulting in dozens of jail sentences and the only presidential resignation in American history. It may seem odd to commemorate such a notorious event but it could not be more relevant to our modern times.

This week begins the first public hearings aiming to unravel an equally serious White House scandal, featuring another corrupt president and all his men and women, that could have even more far-reaching consequences for the country than the first one. The original gumshoe reporters on Watergate, Bob Woodward and Carl Bernstein, who became the most famous journalists in the country, have reported on both events. Unsurprisingly, they both draw some predictable parallels between the two. Writing in the Washington Post over the weekend, the two veterans made this observation:

As reporters, we had studied Nixon and written about him for nearly half a century, during which we believed with great conviction that never again would America have a president who would trample the national interest and undermine democracy through the audacious pursuit of personal and political self-interest.

And then along came Trump.

Their column recapitulates all of the highlights of Watergate (and it's always shocking to see it again in narrative form) and draws the parallels with Trump, showing where he crossed similar lines — and went beyond even Nixon. Woodward and Bernstein call Trump "the first seditious president in American history" and characterize Nixon and him this way:

Both Nixon and Trump created a conspiratorial world in which the U.S. Constitution, laws and fragile democratic traditions were to be manipulated or ignored, political opponents and the media were "enemies," and there were few or no restraints on the powers entrusted to presidents. [...] Both Nixon and Trump have been willing prisoners of their compulsions to dominate, and to gain and hold political power through virtually any means. In leaning so heavily on these dark impulses, they defined two of the most dangerous and troubling eras in American history.

As Washington warned in his Farewell Address more than 225 years ago, unprincipled leaders could create "permanent despotism," "the ruins of public liberty," and "riot and insurrection."

Watergate caused a lot of damage to the United States. It created a new layer of cynicism and distrust that never quite went away and the pardon of Richard Nixon was probably the biggest error in political judgment. While many of his accomplices did face serious prison terms, the man himself — the mastermind — was never held to account legally. That sent Richard Nixon's own message to a whole generation of conservative legal minds: "When the president does it, it's not illegal." In fact, they fully embraced a doctrine around it called the Unitary Executive Theory, which they then whispered in Donald Trump's ears as he smashed every rule and norm of the Executive branch. He did this publicly rather than surreptitiously as Nixon had done because he didn't know any better. Recall his oft-repeated insistence on his power to "do anything I want":

There were a number of instances in which both presidents issued insane and illegal orders with some functionaries eagerly signing on while others blocked and tackled to prevent anyone from carrying it out. Recall that Nixon ordered a break-in of the Brookings Institute (which G. Gordon Liddy then proposed should be firebombed) and Trump wanted to launch missiles into Mexico to "take out the drug labs" and then deny it. They both wanted protesters shot and considered the free press the enemy. But it is not comforting to know that the only thing standing between America being a democratic nation and a fully formed tyranny is a few functionaries failing to follow his orders.

It's fair to wonder if Nixon had been fully held to account for his crimes if there would have been a Donald Trump. You can certainly bet that the lesson Trump took from Nixon was that he would never have to pay a price for what he did as president. And it looks more and more as if he was right. In fact, it may be that he won't even have to pay a political price much less a legal one.

RELATED: House coup plotters stand firm — but DOJ and the Jan. 6 committee are closing in

Congresswoman Liz Cheney, R-Wy., told Robert Costa of CBS on Sunday that the January 6th Committee has evidence of an "extremely broad and "extremely well-organized" conspiracy to overturn the 2020 election. When asked if she thinks people will watch the hearings, she said:

"We are, in fact, in a situation where he continues to use even more extreme language, frankly, than the language that caused the attack. And so, people must pay attention. People must watch, and they must understand how easily our democratic system can unravel if we don't defend it."

Saying they must is not the same as saying they will. I certainly hope they will but I don't think we can count on Republicans tuning in. As Cheney herself said, many Republicans have "pledged their allegiance" to Trump over country although she also thinks "the majority of Republicans across the country don't want to see our system unravel." I'm not so sure about that.

It's worrying that the right is going to ignore, lie, obfuscate, distract, whatever it takes to keep people believing that Trump's lawbreaking was simply a presidential prerogative instead of a coup attempt by the greatest sore loser in history. They certainly do not expect that Trump will be held legally responsible for what he did. After all, he had his "Article II" that says it's not illegal if the president does it.

Last week we found out that the Department of Justice has declined to prosecute former White House Chief of Staff Mark Meadows and former adviser Dan Scavino for contempt of congress. They didn't specify why, and there might be good reasons for it if they are investigating White House involvement, including the president, in the coup attempt. If that's the case, it's one of the most tight-lipped DOJ investigations in history.

In one of the big Watergate cases concerning the cover-up of the burglary, in which John Mitchell the former Attorney General and top White House staffers H. R. Haldeman, John D. Ehrlichman among others were convicted, the president was named an unindicted co-conspirator. It remains to be seen if Trump's attempt to overturn the election will merit comparable accountability, however tepid it might be.

This week begins a new phase in this ongoing crisis of democracy. Let's hope the Jan. 6 committee can lay out the story in such stark terms that at the very least there will be political fall-out for Donald Trump that shakes loose a few of his cult followers. I'm afraid that may be the best we can hope for.