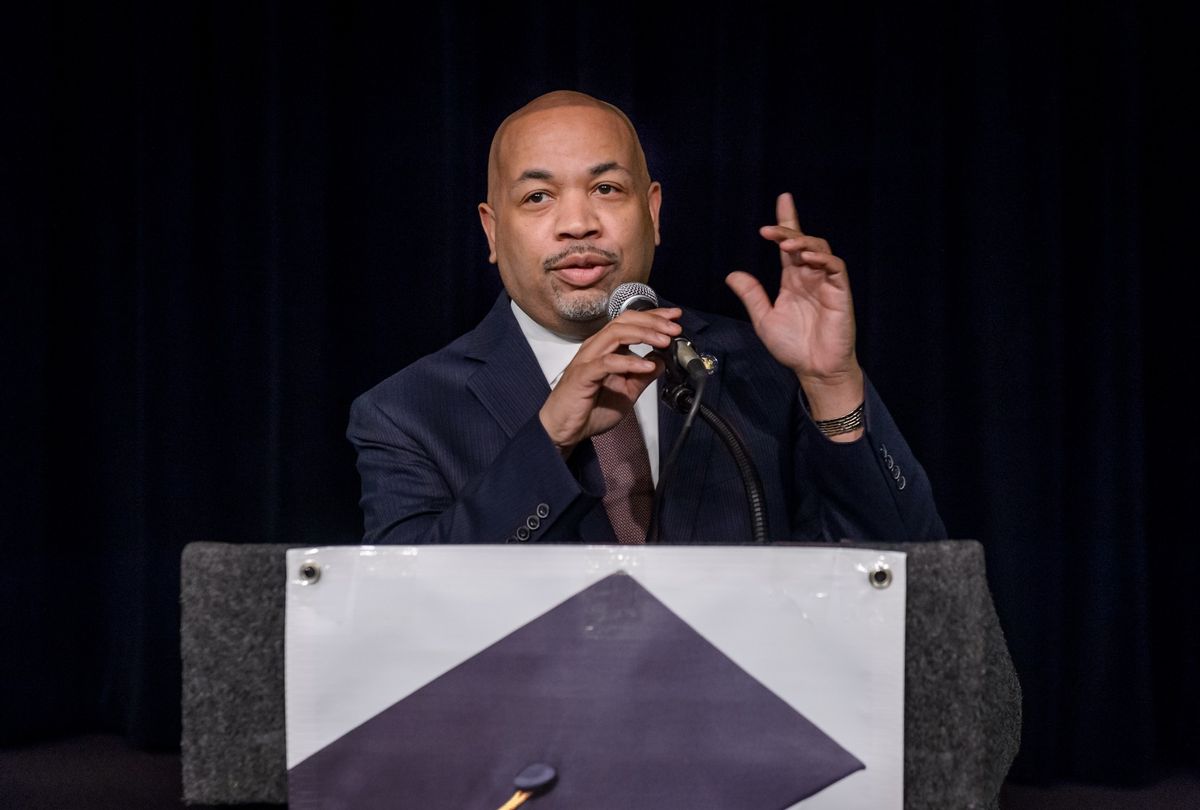 A major renewable energy bill never got a vote before the New York State Assembly's session ended early Saturday, leading its supporters and political observers to call out the Democratic speaker and cast doubt on the party's commitment to climate action on a national scale.

Noting that it only takes 76 votes to pass a bill in the chamber and 83 members confirmed their support for the Build Public Renewables Act (BPRA), the Public Power NY Coalition on Friday pushed Assembly Speaker Carl Heastie (D-83) to hold a vote before lawmakers left Albany for the year and charged that "failure to do so is unequivocally climate denial."

Echoing that message Saturday, Aaron Eisenberg of the Public Power NY Coalition tweeted that given the number of Democrats in the Assembly, "any bill that passes the Senate should pass without fail," and specifically blasted Heastie for his lack of leadership on the bill.

In a lengthy statement Monday that one critic called a "pack of lies," Heastie said that "the final version of the bill—amended two days prior to the scheduled close of our legislative session—had support in our conference, but not enough to move forward at this point."

Heastie added that "because of our support for the goals of this bill," he has asked some Assembly leaders to convene a hearing on July 28 "to review this subject and get additional public input."

Still, the bill's future is uncertain. The No North Brooklyn Pipeline Coalition said Saturday that "we are heartbroken, enraged, and terrified" that state lawmakers failed to pass critical climate measures during this session.

The coalition advocated for the BPRA and other climate-related legislation because "we need to transform our energy system and we need to do it now. Delayed action is climate denial in 2022," the statement added, also taking aim at Heastie. "Our fight for climate equity and a livable future continues."

New York lawmakers in 2019 enacted the Climate and Community Protection Act (CLCPA), establishing the state's goal of 100% clean energy by 2040.

The Public Power NY Coalition argued last week that "the only path to ensuring New York not only meets our CLCPA mandate, but the scale of what is needed to address the climate crisis… is by passing the Build Public Renewables Act."

Passing the CLCPA "was seen as a major achievement—enough to consider climate having been acted upon," Assemblymember Zohran Mamdani (D-36), a BPRA co-sponsor and democratic socialist, told Aronoff. Since then, there's been a lack of urgency in the caucus.

"What we're dealing with right now here in Albany," Mamdani said, "is a microcosm of a fight within the Democratic Party about how to respond to the climate crisis: What kind of vision is required, and what role does the state have?"

Fellow BPRA co-sponsor Assemblymember Bobby Carroll (D-44) told Aronoff that "if we're going to meet our climate goals, we need the state to play a large role," rather than continuing to "rely solely on a profit-driven model."

The Democrat-controlled New York State Senate last Wednesday passed the BPRA, which would enable the New York Power Authority (NYPA) to build, own, and operate renewable projects, and force the state's public energy provider to phase out its fossil fuel plants by 2030.

Dharna Noor last year reported for Earther on how the BPRA could be a model for the rest of the United States.

"That NYPA is publicly owned and operated is important for two reasons. For one, as a state entity, it's directly governable, unlike investor-owned utilities," Noor explained. "Unlike investor-owned utilities, which are required to make money for their shareholders, NYPA also has no profit motive. That would make it easier to ensure that the utility bills of low-income households stay low and that communities see the benefits of an energy transition."

Unlike what would happen if renewables were to be built by the state's investor-owned utilities, the expense wouldn't be passed down to households via a process known as "ratebasing," whereby utilities can raise bills to finance new infrastructure if they get approval from the Public Service Commission. Currently, new power generation infrastructure outside of NYPA is built by independent power producers, whose trade association has been fiercely opposed to BPRA.

After the Assembly session ended, Aronoff and others noted opposition to the bill by the fossil fuel and solar industries.

Journalists and groups such as local chapters of Democratic Socialists of America (DSA) and the Sunrise Movement also highlighted fossil fuel industry donations to Heastie.

Heastie has received $61,230 from the oil, automotive, and electric utilities industries—all of which oppose the BPRA.

Beyond his own fundraising apparatus, Heastie also controls the Democratic Assembly Campaign Committee, a multimillion-dollar organization that relies on special interests for funding and allows Heastie to dole out cash to favored campaigns. It's a powerful tool for maintaining his leadership position in the party.

The NYC-DSA's Ecosocialist Working Group referenced that reporting Monday in a tweet about the group's call to discuss how to elect lawmakers who take the climate emergency seriously.

"We built the momentum and popular support to push it through the Senate," the working group said of the renewables legislation. "At the last minute, the establishment undemocratically stepped in to stop us. But we proved once and for all why we need to replace climate-denying cowardice with bold climate leadership."

"The time is now to rally around the next set of state legislators that are going to win their primaries this summer and then actually pass climate bills all the way," the group tweeted. "The energy behind public power was electric, and really shows the strength of this coalition. We'll keep fighting."

Some state lawmakers—including Sen. Jabari Brisport (D-25)—are also dedicated to creating the conditions to pass such bills in New York.

"Speaker Heastie and other electeds chose fossil fuel industry campaign donations over the health and survival of New York's children," said Brisport. "My former students just graduated middle school, but their bright futures are being traded away—to be replaced by the absolute climate catastrophe we're headed towards."

New Yorkers will not stand for this; we will continue to organize and fight for climate justice to protect the future of New York and all of its children.

Climate devastation is not an accident—it is the known, inherent outcome of capitalism. Our energy comes from private corporations that are legally obligated to prioritize their own profits over the future and survival of New York. This is capitalism functioning exactly as it was designed to, and it is killing us.

The battle for the BPRA in New York comes as Democrats are squandering their opportunity to pass federal climate legislation while controlling not only the White House but also both chambers of Congress—a situation that could soon change due to this fall's elections.

Although the U.S. House of Representatives last year approved a watered-down Build Back Better package intended to deliver on some of President Joe Biden's climate pledges, the legislation has stalled in the Senate because of the filibuster and a few right-wing Democrats.

With the midterms just months away, election experts such as Charlie Cook warn that congressional "Democrats are likely to lose both their House and Senate majorities," based on trends from past cycles and current conditions across the country.

"We are left wondering whether this will be a bad election for Democrats, very bad, or very, very bad," Cook wrote last week. "As they say in the markets, the downside risk for Democrats is grave."