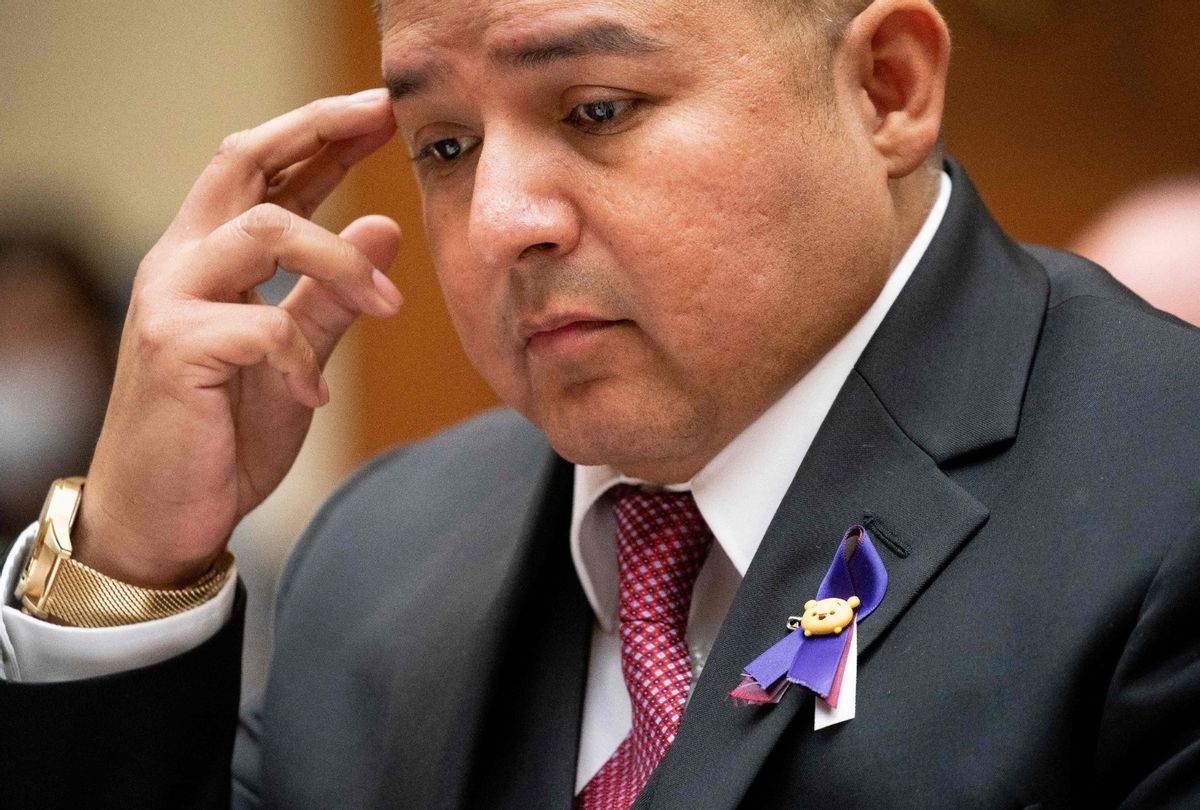 Roy Guerrero, a pediatrician from Uvalde, Texas, testifies to the House Oversight and Reform Committee hearing on gun violence on Capitol Hill in Washington, DC, on June 8, 2022. (STEFANI REYNOLDS/AFP via Getty Images)
--

A local pediatrician who rushed to Uvalde Memorial Hospital after the massacre of 19 children and two teachers at Robb Elementary School in Texas last month testified Wednesday during a congressional hearing on gun violence.

"I was called here today as a witness," Dr. Roy Guerrero told members of the House Oversight Committee. "But I showed up because I am a doctor. Because... many years ago I swore an oath—an oath to do no harm."

"After witnessing first-hand the carnage in my hometown of Uvalde, to stay silent would have betrayed that oath," said Guerrero, a Robb Elementary alumnus.

The physician recounted how the day "started like any typical Tuesday" at his pediatric clinic until half past noon, "when business as usual stopped and with it my heart."

"I raced to the hospital to find parents outside yelling children's names in desperation and sobbing as they begged for any news related to their child," he said. "Those mother's cries I will never get out of my head."

"As I entered the chaos of the ER, the first casualty I came across was Miah Cerrillo," recalled Guerrero. "She was sitting in the hallway. Her face was still, still clearly in shock, but her whole body was shaking from the adrenaline coursing through it. The white Lilo and Stitch shirt she wore was covered in blood and her shoulder was bleeding from a shrapnel injury."

Cerrillo, who also testified at the hearing, was a lucky survivor. Guerrero said he next saw "two children whose bodies had been so pulverized by the bullets fired at them, decapitated, whose flesh had been so ripped apart, that the only clue as to their identities was the blood-spattered cartoon clothes still clinging to them."

I'll tell you why I became a pediatrician. Because I knew that children were the best patients. They accept the situation as it's explained to them. You don't have to coax them into changing their lifestyles in order to get better or plead [with] them to modify their behavior as you do with adults. No matter how hard you try to help an adult, their path to healing is always determined by how willing they are to take action. Adults are stubborn. We're resistant to change even when the change will make things better for ourselves. But especially when we think we're immune to the fallout.
Why else would there have been such little progress made in Congress to stop gun violence?

The thing I can't figure out is whether our politicians are failing us out of stubbornness, passivity, or both.

"In this case, you are the doctors and our country is the patient," he continued. "We are lying on the operating table, riddled with bullets like the children of Robb Elementary and so many other schools. We are bleeding out and you are not there."

"My oath as a doctor means that I signed up to save lives," he added. "I do my job. And I guess it turns out that I am here to plead. To beg. To please, please do yours."