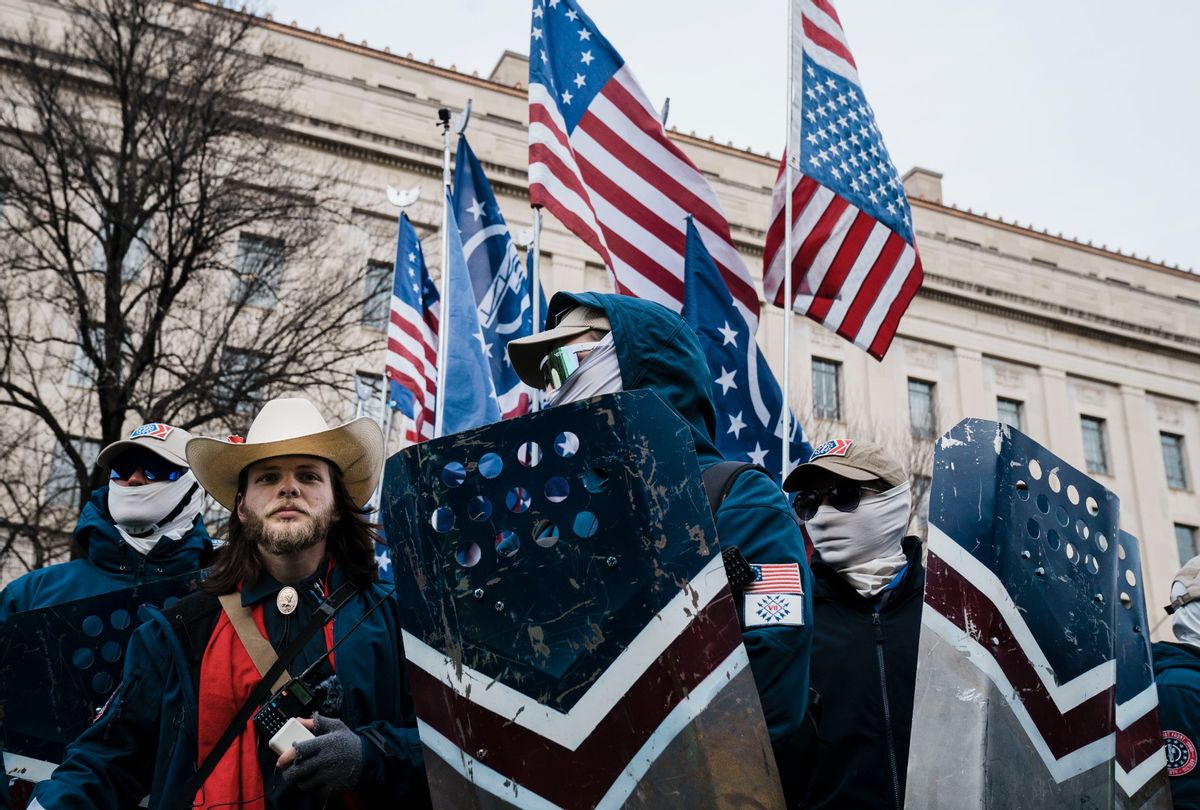 Members of the right-wing group, the Patriot Front, and their founder, Thomas Ryan Rousseau, second from left, prepare to march with anti-abortion activists during the 49th annual March for Life along Constitution Ave. on Friday, Jan. 21, 2022 in Washington, DC. (Kent Nishimura / Los Angeles Times via Getty Images)
--

On Monday, The Daily Beast reported that the police department in Coeur d'Alene, Idaho is being bombarded with angry messages — including death threats — after a high-profile mass arrest of the members of the white supremacist group Patriot Front.

The arrests took place over the weekend, after 31 men were caught piled into a rented truck, on their way to a local Pride event where they allegedly were intending to cause a riot. The arrested white supremacists came from at least 11 states around the country, and included 23-year-old Thomas Ryan Rousseau of Grapevine, Texas, believed to be the group's leader.

"Police Chief Lee White said Monday the department had received 149 phone calls since the arrests, some of which have included death threats," reported Alice Tecotzky. "About half of the calls were complimentary, White told reporters, 'and the other 50 percent — who are completely anonymous, who want nothing more than to scream and yell at us and use some really choice words — offer death threats against myself and other members of the police department.' Some callers have threatened to publish officers' personal information, such as their phone numbers or addresses, online."

According to Nick Martin of the independent hate group tracker The Informant, white supremacist activists are already zeroing on on the Coeur d'Alene police department as a target after the arrests took place.

"Neo-Nazis on other social media platforms have started doxxing members of law enforcement in Coeur d'Alene. Names, home addresses, phone numbers and photos are being circulated," wrote Martin. "One of the members of the Coeur d'Alene Police Department is being described by neo-Nazis as an 'Anti-American and Pedophile Apologist' because the arrests prevented the Patriot Front members from allegedly planning to disrupt a Pride event."

Coeur d'Alene, a town in the Idaho panhandle near Spokane, Washington, is part of a region that has become a notorious hotbed for right-wing paramilitary extremists.