Manchin has repeatedly gutted abortion rights and refused to back a bill that would have enshrined it into U.S. law 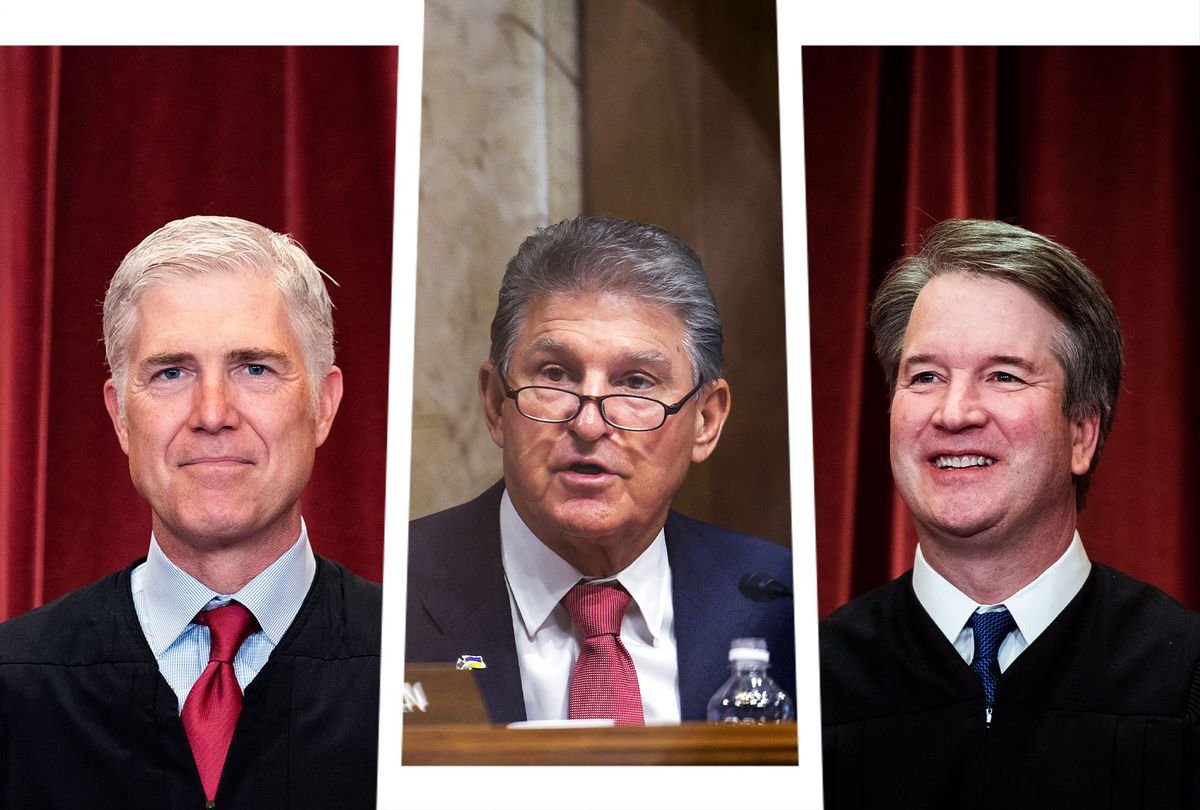 Sen. Joe Manchin, D-W.Va., a conservative Democrat known for siding with the GOP, on Friday said he was "alarmed" that conservative Supreme Court Justices Neil Gorsuch and Brett Kavanaugh broke his trust with their Friday reversal of Roe v. Wade, the landmark decision establishing America's constitutional right to abortion.

"I trusted Justice Gorsuch and Justice Kavanaugh when they testified under oath that they also believed Roe v. Wade was settled legal precedent and I am alarmed they chose to reject the stability the ruling has provided for two generations of Americans," he told NBC News.

During Gorsuch's confirmation hearings in 2017, the then-nomineee called Roe "a precedent of the United States Supreme Court."

"A good judge will consider it as precedent of the U.S. Supreme Court worthy as treatment of precedent like any other," Gorsuch said at the time.

Kavanaugh largely echoed that sentiment in his own confirmation hearings the following year, saying that Roe "is settled as a precedent of the Supreme Court, entitled the respect under principles of stare decisis."

Manchin's comments come on the heels of Friday's much-awaited Supreme Court decision giving states the green light to prohibit abortion. Back in May, Politico reported that the judiciary was all but poised to overturn Roe, turning back the clock of abortion rights by half a century.

Following that report, Manchin faced calls to enshrine abortion into federal law, which would have required him to nuke the filibuster. However, the West Virginia senator refused, arguing, "We've protected women's rights with the filibuster."

Earlier in the year, Manchin was the only Democrat to vote against Senate bill that would have officially codify abortion access into U.S. law, claiming that the measure would have "expanded abortion" rather than protect it.

"It's just disappointing that we're going to be voting on a piece of legislation which I would not vote for today," he said at the time.

Historically, Manchin has positioned himself as "pro-life," with mixed ratings from pro-choice and anti-abortion advocates.

In 2018, during the Trump administration, he voted in support of a bill to ban abortion after twenty weeks into pregnancy. Later that year, shortly after former Justice Anthony Kennedy's stepped down, Manchin seemingly reversed course, encouraging then-President Donald Trump to choose a "centrist" justice who would not challenge the right to abortion. In 2019, he also threw his weight behind the "Born-Alive Abortion Survivors Protection Act," a Republican-backed bill granting legal protections to infants born alive after failed abortions.