"We won't go back!": Spontaneous protests break out across U.S. after Supreme Court overturns Roe 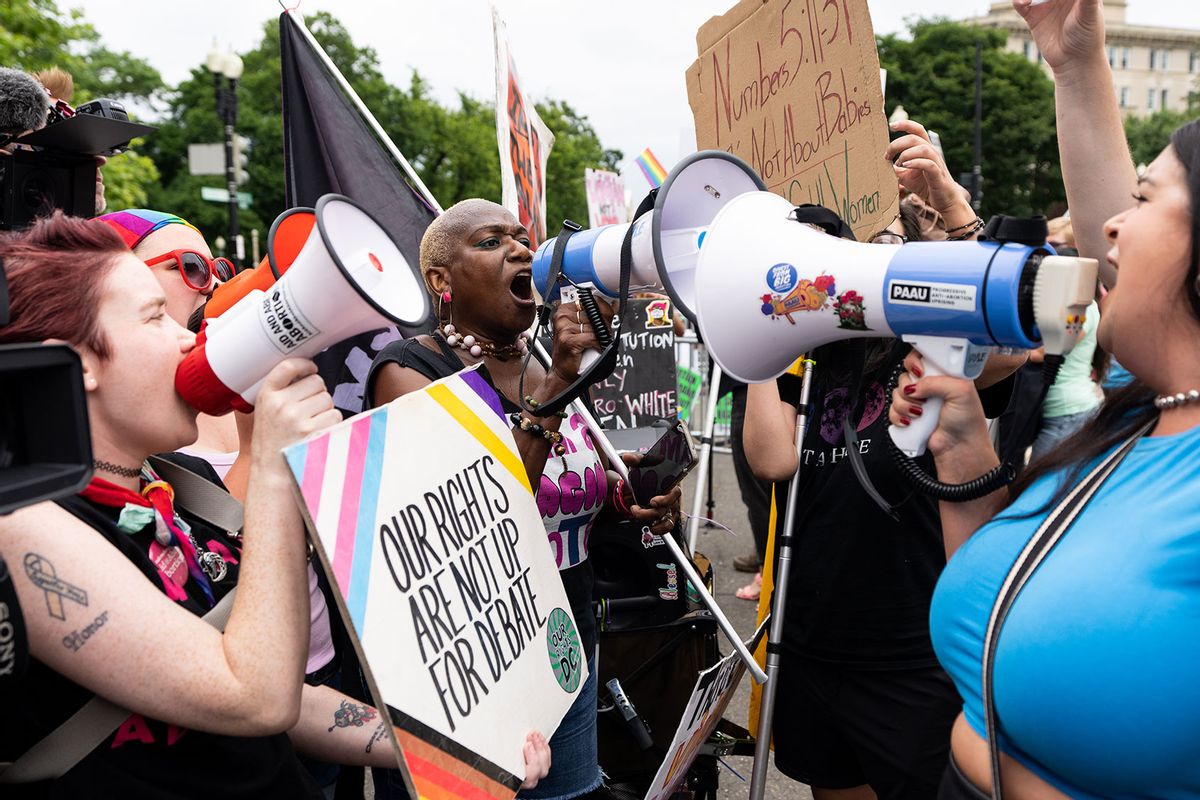 Pro-choice and pro-life activists shout each other down with megaphones outside of the U.S. Supreme Court as they wait for the court to hand down its decision on Dobbs v. Jackson to overturn Roe v. Wade on Tuesday morning, June 21, 2022. (Bill Clark/CQ-Roll Call, Inc via Getty Images)
--

People and advocacy groups across the nation rushed to voice outrage and organize rapid-response demonstrations Friday after the U.S. Supreme Court's right-wing supermajority voided half a century of reproductive rights by reversing the landmark Roe v. Wade ruling.

"The SCOTUS decision is class warfare—time to hit the streets!"

Protesters immediately descended upon the Supreme Court in Washington, D.C. in the wake of Dobbs v. Jackson Women's Health Organization, a 6-3 decision declaring that "the Constitution does not confer a right to abortion... and the authority to regulate abortion must be returned to the people and their elected representatives."

Demonstrators chanted slogans including "We won't go back!" and "My body, my choice!" as they rallied against the court's right-wing majority. One activist held a sign defiantly proclaiming, "I will aid and abet abortion," a reference to laws in states including Texas that outlaw the medical procedure and empower vigilantes to collect bounties on people seek one and those who help them.

Advocacy groups and activists around the nation prepared to kick off that fight with localized demonstrations across the country on Friday.

The "We Won't Go Back" coalition's website includes a map to locate a planned demonstration in your area or to create your own event.

"We must organize," reads the call to action, "to sound an undeniable alarm to emboldened local lawmakers that they cannot further erode an already insufficient right to abortion and sexual and reproductive healthcare for so many."

"We are the majority," she said. "And Republicans packed the courts to accomplish through the courts what voters have repeatedly rejected at the ballot box. We will hold every Republican accountable for overturning Roe and further eviscerating abortion access."

She added: "We have one message today for every Republican who has pushed these draconian policies for years and who attempts to put abortion bans into effect in the states: We'll see you at the ballot box."

Democratic Socialists of America, many of whose chapters announced Friday rallies, tweeted that "the SCOTUS decision is class warfare—time to hit the streets! We call on DSA chapters, members, and electeds to mobilize now against this violent attack on abortion rights. Free abortion on demand and without apology!"

The National Mobilization for Reproductive Justice—which is also staging a 5:00 pm protest in San Francisco, at the old Federal Building—tweeted in anticipation of the ruling that "we need solidarity now more than ever as SCOTUS erodes more rights with each decision."

Students for a Democratic Society chapters rushed to organize emergency demonstrations in cities including Denver, Tampa, and Tallahassee.

Indivisible announced it was co-hosting a next-steps "conversation" with the legal advocacy group People's Parity Project, Stand Up America, and Take Back the Court at 1:00 pm EST.

"If there's one thing we know—if there's one thing today shows—it's that no ruling, law, or decision is unchangeable. The rules are determined by who holds the power. So now we have to build the power to fight back," Indivisible co-executive director Leah Greenberg said in a statement.

Others noted that state legislatures are now the front lines in the fight for reproductive rights. More than half of all U.S. states are expected to respond to Friday's ruling by enacting total abortion bans, including 13 states with so-called "trigger bans" that automatically outlawed abortion when Roe was overturned.

"In the wake of today's decision, state legislatures are now the main battleground for abortion rights in America," tweeted Forward Majority. "If you care about reproductive rights, you need to care about state legislative power."