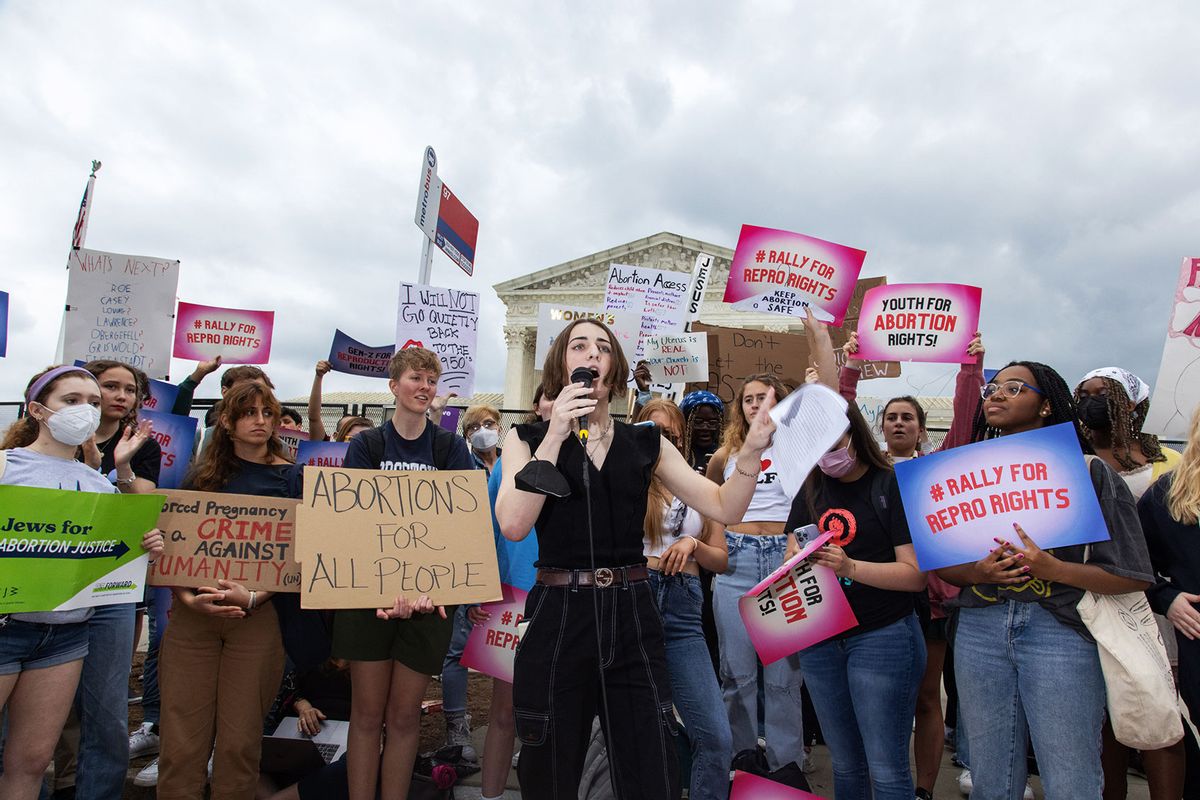 Youth pro-abortion rights demonstrators with Generation Ratify and other organizations rally outside of the Supreme Court in Washington, D.C. on May 5, 2022, following the leak of a draft Supreme Court opinion to overthrow Roe vs. Wade. (Bryan Dozier/Anadolu Agency via Getty Images)
--

The driver of a Ford truck maneuvered around multiple cars at a red light and drove through the tail end of a group of demonstrators who were crossing a street downtown, running over one woman's ankle and sending her to the hospital, witnesses told HuffPost.

"He tried to murder them," said Lyz Lenz, a local journalist and witness to the attack. "These women see him coming and a bunch of people put their hands out to stop him. And he just keeps going."

Video footage recorded by Linn County Supervisor Stacey Walker shows several women standing in front of the truck with outstretched arms, trying to persuade the driver to stop. But the motorist keeps plowing forward, knocking down and injuring several of them.

Alexis Russell, who can be seen reaching into the driver's side window in an attempt to steer him away from other protestors, told HuffPost that he "grabbed my sign and ripped it, and I fell, and he proceeded to run over one of the girls."

Although the Cedar Rapids police reportedly interviewed the driver Friday night, no arrests were made.

Iowa is one of three states that have enacted laws shielding motorists who run over protestors from liability under certain circumstances.

The bill that Republican Gov. Kim Reynolds signed into law last June grants a driver "who is exercising due care" immunity from civil lawsuits for injuring someone "who is participating in a protest, demonstration, riot, or unlawful assembly or who is engaging in disorderly conduct and is blocking traffic in a public street."

Similar bills have been introduced in more than a dozen other states since 2017.

According to HuffPost, "Several witnesses argued that the attack was motivated by anger over the protest," one of many that erupted nationwide after the high court's reactionary majority eliminated the constitutional right to abortion, immediately harming pregnant people in Republican-controlled states with "trigger bans" and endangering many more elsewhere.

Molly Monk, a witness, told the outlet that the driver went "out of his way to hit protesters in the street who had very visible, very clear signs that they were pro-choice."

"It makes me feel like the pro-life movement is a complete lie if, in order to be against people who are protesting for abortion rights, you try to murder them in my street, in my neighborhood," said Monk. "It makes me very, very sad, very hurt, and very angry that this is what people think pro-life means."

The anti-abortion movement has an extensive history of violence.

Over the past 43 years, anti-abortion extremists have committed at least 11 murders, attempted over two dozen more, issued almost 1,000 threats of harm or death, and been involved in 614 stalking incidents and four kidnappings, according to the National Abortion Federation. They have also bombed more than 40 abortion clinics, set fire to nearly 200, and made roughly 670 bomb threats.