Biden receives backlash for not wanting to expand Supreme Court

"What does the leader of this country want to do to stop the increasingly fascistic assault . . .?" 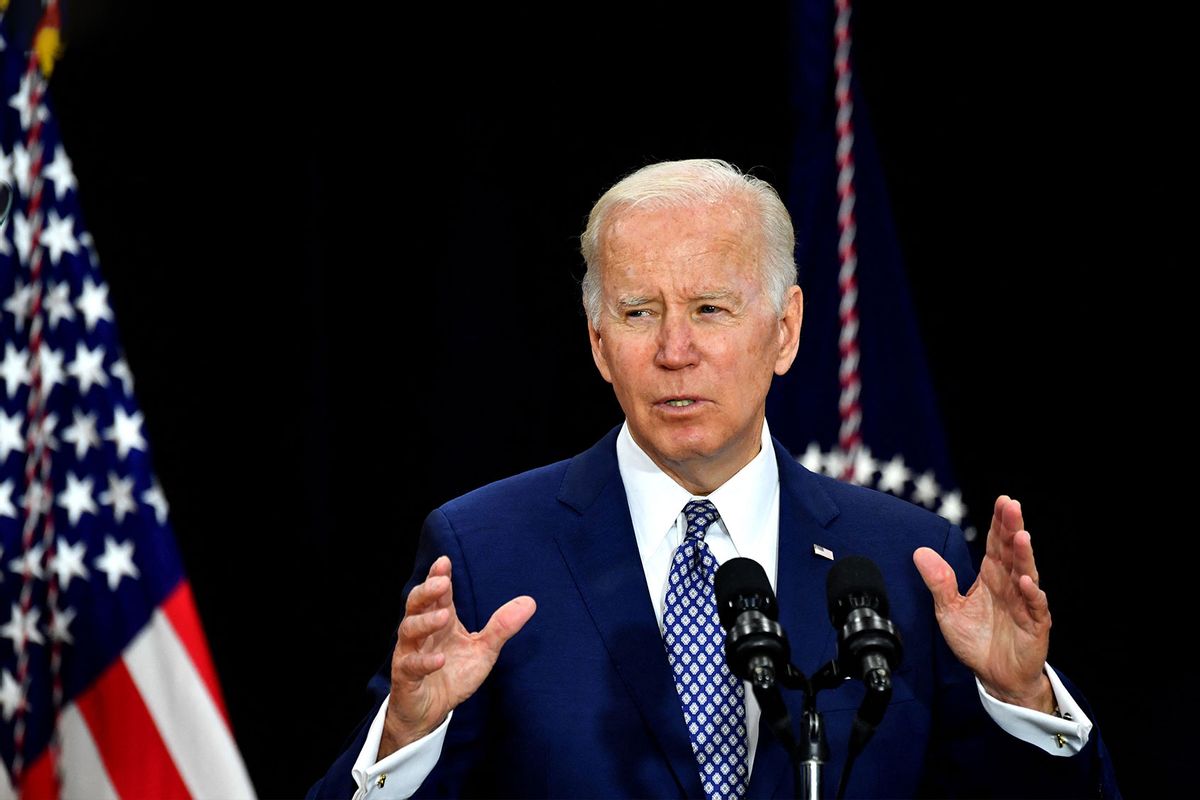 US President Joe Biden delivers remarks after visiting a memorial near a Tops grocery store in Buffalo, New York, on May 17, 2022. (NICHOLAS KAMM/AFP via Getty Images)
--

President Joe Biden was rebuked Saturday for doubling down on his opposition to expanding the U.S. Supreme Court even after its deeply unpopular right-wing majority spent the past week ending the constitutional right to abortion care, weakening gun restrictions, undermining the separation of church and state, and eroding hard-won civil rights, with more attacks on equality and federal regulatory power expected.

"That is something that the president does not agree with," White House Press Secretary Karine Jean-Pierre told reporters when asked about the possibility of court expansion. "That is not something that he wants to do."

"What does Biden 'agree' with doing?" Hasan asked on social media. "What does the leader of this country want to do to stop the increasingly fascistic assault on our democratic institutions and basic rights?"

Hasan and other outraged commentators were responding to a viral tweet suggesting that Biden is opposed not only to court expansion but also to filibuster reform.

While ABC News confirmed that Biden doesn't support expanding the high court, CNN reporter Mike Valerio deleted his tweet because, as journalist Judd Legum explained, it misrepresented Jean-Pierre's comments about the president's position on the filibuster. Although Biden has typically defended the Senate's 60-vote threshold for advancing most legislation, he has called for carve-outs on voting rights. He may or may not do the same for reproductive freedom, but Jean-Pierre dodged the question.

"I don't care what President Biden thinks about the filibuster," said Rep. Ted Lieu (D-Calif.). "He is no longer in Congress."

"This is the messaging and the actual facts," Lieu continued. "If we elect two more Democratic U.S. Senators and Democrats hold the House, we can pass the bill that codifies Roe v. Wade into law."

The House passed the Women's Health Protection Act last year, but it has stalled in the Senate because right-wing Democratic Sens. Joe Manchin (W.Va.) and Kyrsten Sinema (Ariz.) have repeatedly refused to back abolishing or suspending the filibuster, thus giving the GOP minority veto power over most legislation.

While Lieu argued that the Senate Democratic Caucus needs just two more members to be able to repeal the filibuster and codify Roe, others made the case that Biden and other party leaders need to do much more, including expanding the Supreme Court, to prevent the Republican Party from continuing to impose a reactionary agenda opposed by the vast majority of Americans.

"Any Democrat not calling for the expansion of the Supreme Court," journalist Jordan Zakarian said Friday on social media, "is now in favor of the end of abortion rights and the coming attacks on same-sex marriage, contraception, and every other right we have."

Last April, Biden appointed a 36-member bipartisan commission to study potential reforms to the Supreme Court—including the addition of more seats, the establishment of term limits, and the creation of a code of ethics for justices.

Although the panel found "considerable" support for 18-year term limits for justices, proposals to increase the size of the court were met with "profound disagreement."

"More and more people are understanding what I've been saying is going on," he added, pointing to recent reporting by The Lever. "The court got captured by special interests using gobs of dark money."

In a Sunday appearance on ABC's "This Week," Warren told host Martha Raddatz that the high court has "burned whatever legitimacy they still may have."

"They just took the last of it and set a torch to it with the Roe v. Wade opinion," she said. "I believe we need to get some confidence back in our court and that means we need more justices on the United States Supreme Court."

Soon after Biden created his Supreme Court commission, congressional Democrats—led by Reps. Jerry Nadler (D-N.Y.), Hank Johnson (D-Ga.), and Mondaire Jones (D-N.Y.) in the House and Markey in the Senate—introduced legislation that would expand the number of seats on the high court from nine to 13.

While its passage is unlikely barring the election of more progressive lawmakers in the upcoming midterms, there is no shortage of ideas for immediate steps the Biden administration could take to protect abortion access in post-Roe America.

In a letter sent to the White House on Saturday, 33 Senate Democrats told Biden that "now is the time for bold action to protect the right to an abortion."

"You have the power to fight back and lead a national response to this devastating decision," the letter states, "so we call on you to take every step available to your administration, across federal agencies, to help women access abortions and other reproductive health care, and to protect those who will face the harshest burdens from this devastating and extreme decision."

Biden has instructed the Justice Department to ensure that pregnant people can travel to states where abortion remains legal, and Attorney General Merrick Garland has vowed to crack down on states that attempt to ban federally approved abortion pills.

But there is much more that can be done, progressives say. As of Sunday, more than 14,200 people have signed Ocasio-Cortez's petition urging Biden to open abortion clinics on federal lands, especially in states where access to care has already been eliminated or severely reduced.