“Help us,” Eastman said on Fox News. “Help us fight this abuse. We’ve got to stand together to fight against this" 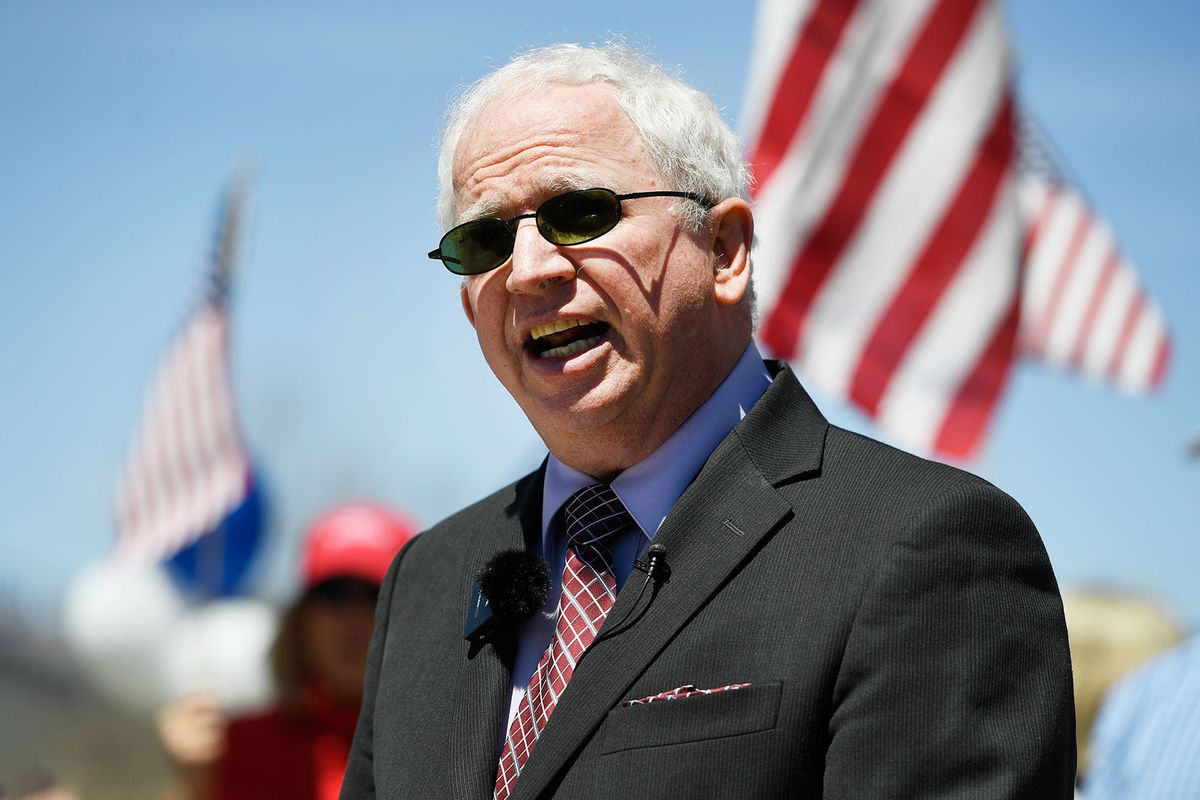 John Eastman, the University of Colorado Boulders visiting scholar of conservative thought and policy, speaks about his plans to sue the university at a news conference outside of CU Boulder on Thursday, April 29, 2021. CU relieved Eastman of his public duties after he spoke at President Donald Trump's rally preceding the Capitol insurrection on Jan. 6. (Andy Cross/MediaNews Group/The Denver Post via Getty Images)
--

John Eastman, the right-wing lawyer who sought to overturn the 2020 presidential election, is raising thousands of dollars for a legal defense fund ostensibly designed to shield him from the House select committee investigation into the Capitol riot.

Eastman plugged his defense fund in a Tuesday interview with Fox News host Tucker Carlson, who asked him to explain why the FBI recently seized his phone in connection with the probe.

"What exactly did you do wrong to be treated like a dangerous criminal by your government, that you paid for?" asked Carlson.

"Well, we don't know because the warrant doesn't say," Eastman replied. "But there's no indication of any crime that this is connected to. That's apparently attached in an affidavit, but the affidavit isn't attached to the warrant."

RELATED: Trump ready to throw John Eastman under the bus, claims he "barely" knows him: report

Estman also called the seizure an "abuse" of the Fourth Amendment, claiming that Biden was acting like a "British king."

"And it's just another reminder for anyone that didn't vote for Joe Biden to erase your texts and emails every single day," Carlson said.

Toward the end of the interview, Eastman directly asked the audience to donate to his legal defense fund. "Help us," he said. "Help us fight this abuse. We've got to stand together to fight against this."

Over the past year, Eastman has refused to cooperate with the committee's investigation.

Back in January, Eastman fought to court to shield his private emails with members of Trump's inner circle, in which the right-wing attorney helped the former president concoct a legally dubious scheme to reverse the election.

By June, a judge had ordered Eastman to submit 159 documents to the panel. Some of the materials obtained by the committee revealed that Eastman had coordinated with conservative activist Ginni Thomas, the wife of Supreme Court Justice Clarence Thomas, who pressured former White House Chief of Staff Mark Meadows to buttress Trump's election conspiracy, according to The Washington Post.

During the January 6 hearings this month, committee member Pete Aguilar, D-Texas, noted that Eastman pleaded the 5th Amendment dozens of times while providing closed-door testimony to the panel months ago.