What keeps us playing out the terrible rituals we've built around senseless deaths? 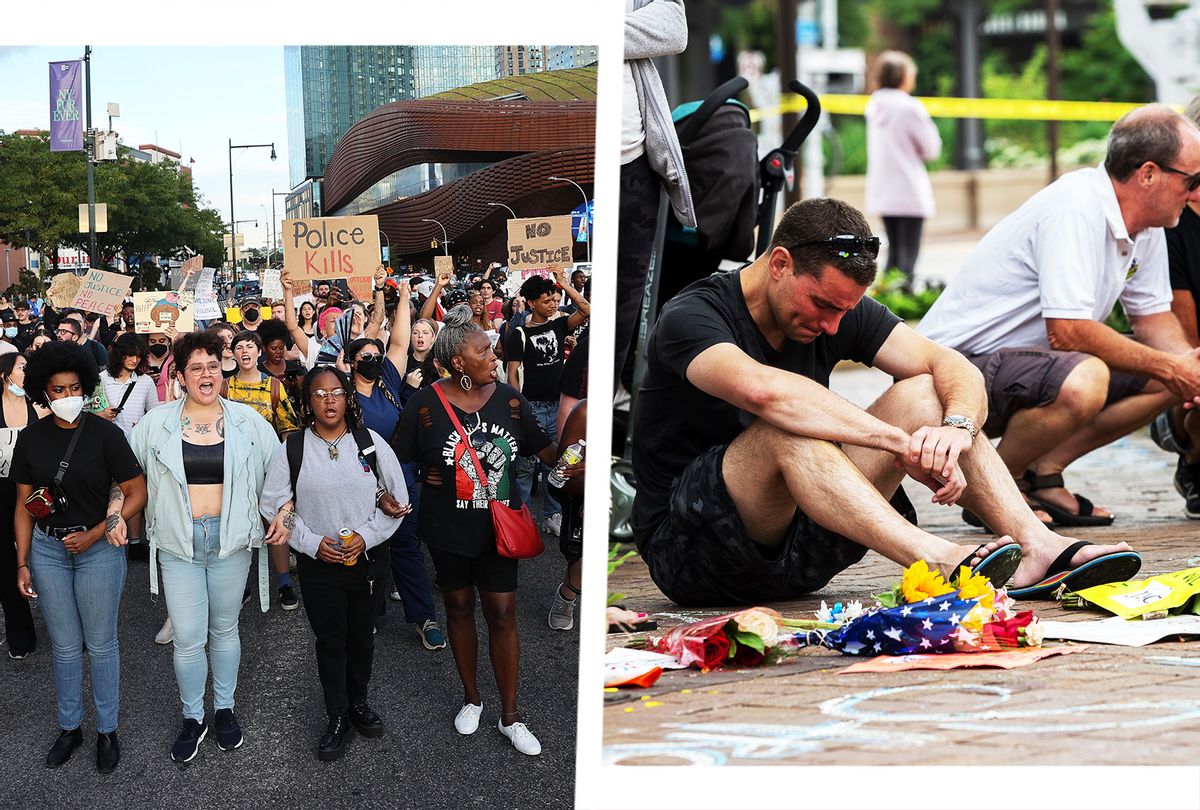 BLM protesters gather outside of Barclays Center and take streets in Brooklyn, New York City, United States on July 6, 2022 to protest against the killing of Jayland Walker, by Akron Police in Akron, Ohio. | Mourners react at a memorial site for the victims of a mass shooting at a Fourth of July parade, on July 6, 2022 in Highland Park, Illinois. (Photo illustration by Salon/Getty Images/Tayfun Coskun/Anadolu Agency/Jim Vondruska)
--

"They shot a cop in the county, just last night," Mr. Spud said, scrolling through his phone, the light from his news apps reflecting in his thin clear frames. "I think he gonna live."

Mr. Greene shrugged and chugged his drink. I looked at the box of sticky glazed doughnuts on the table next to the empty bottles of Sunny Delight and wondered how these two men who lived off of sugary snacks and fake OJ are still healthy in their 70s. But none of us really responded to the news. The drama of the NBA finals — LeBron's absence, suspense over whether the young Celtic team could put Golden State to bed — was more interesting.

"I'm cheering for everyone except Boston!" I chuckled to the room of ex-gangsters. The men in that room represent over 200 years' worth of time served in state and federal penitentiaries — all are Black, all are from Baltimore, and all have experienced police violence in one way or another. In meetings like these, younger reformed guys like me connect with the OGs to talk about storytelling, the system and the growing violence in our neighborhoods, with the hopes of using our collective scars and life experience to help the next generation. We do it without the police, because in our community, cops have done way more bad than good. Old school street fame and the trauma we faced on the tattered blocks of our city bonds this group of imperfect, intergenerational allies.

Who has to get shot in America before we do something about guns?

"F**k that cop," said Marcus, who is nearing 50 with the cleanest grey fade that matches the cleanest grey beard I ever saw. As he entered the room, he continued rant about the way police treat guys who look like us. The room erupted in cackles and chuckles, a dark cloud of rage masked in laughter. Well, everyone except me. I can't laugh about it. Maybe I'm worn down by the mass shootings that go viral every week and the never-ending stories about police gunning down Black men. I don't want cops shot, I don't want civilians shot, I don't want people who break the law to be shot, I don't even want people who shoot other people to be shot. And to be clear, the OGs don't want anyone shot, either. Violence prevention is what pulls us together. But when cops have long gotten away with shooting people who look like us, an OG might feel like, on some level, it represents a sort of evening of the shared pain score. And yet that's another person with a family and a community, hurt or dead, all because of what I call "coward culture."

Coward culture is the shared mindset that tells scared people to lash out with the intent to kill. And all of America's guns make it possible. Gun violence stemming from coward culture, including the gun violence initiated by police, has been ruining my life since elementary school. By now we should all know that the philosophy of gun for gun, bullet for bullet doesn't work. But I didn't express my feelings to the room. I just leaned back in my chair and said, "Don't count Bron out, he's going to get the Lakers back in the Finals next year!"

A few weeks later, in LeBron's hometown of Akron, Ohio, Jayland Walker, a 25-year-old Black man, was shot more than 60 times by police officers over July 4 weekend as he ran from a "routine traffic stop." He was unarmed at the time; a gun was found inside the car he fled. Police say they heard a gun go off before Walker exited the car and ran from them.

Coward culture is the shared mindset that tells scared people to lash out with the intent to kill.

And, as it always goes after police officers kill an unarmed Black man, protesters link up and organize as the slain victim's family calls for peace. This has become an American tradition, and its rituals also include the officers involved being placed on administrative leave while an investigation, usually opaque to the public, begins. Maybe a famous attorney arrives in the town that hosted this particular tragedy and prepares to sue on behalf of the family. And maybe the family is awarded a lump sum of money, and maybe the cops lose some pay, and maybe they are fired, and maybe they are even charged, and maybe some are convicted and go to prison. That all remains to be seen.

There is only one certainty in this situation: Jayland Walker, a young man who, like all young people, had the potential to do the most amazing, transformative things with his life, is gone. He isn't coming back. That chapter is closed, never to be opened again.

The weight of all these stories, this American tradition of Black people dying violently at the hands of law enforcement — including George Floyd, Michael Brown, Walter Scott, Freddie Gray, Breonna Taylor — is responsible for the rage shared by the group of men in that room I tried to distract with banter about the NBA finals. The systems that don't hold cops accountable when they shoot Black people causes that rage to build, and it can't grow past the idea of violence.

Over the same weekend, another new American tradition played out its terrible rituals: a young white man — 21-year-old Robert "Bobby" Crimo III — was charged with multiple counts of murder, after confessing to the shooting spree that left seven dead and dozens wounded at a peaceful Independence Day parade in Highland Park, a suburb north of Chicago. Nearly 50 people were reportedly hit by gunfire. Survivors give their accounts to the media. Public mourning begins. Politicians on both sides of the gun control debate make their statements. The alleged shooter's past is combed for clues. This time, the police take him into custody alive, just as they did with Dylann Roof, James Holmes, Robert Aaron Long and Payton Gendron.

After Buffalo and Uvalde, America feels broken: Where do we go from here?

The contrast between the circumstances of Crimo's arrest and those of Jayland Walker's death is also what pushes men — who can see no good in a system that enables that contrast — to shrug at violence when it's directed at police.

Part of me wishes I would have broken up the bleak conversation at that OG meeting with some anti-violence rhetoric. I would never celebrate violence myself. But I can understand why those men scoffed at someone else's pain. We need to reckon with the coward culture that brought us all to this point.

For as long as I can remember, people in the streets like us mainly mourned tragedies that claimed the lives of people from the streets. Just as, I assume, people in law enforcement mainly mourned the tragedies that befell their own coworkers. But everyone's afraid now of going to work — or to a concert, or to buy food, or to worship, or even to a small town holiday parade. These two violent American traditions that played out their rituals last weekend are undeniably connected — through coward culture that fosters the atmosphere of violence and through the guns that make it deadly. If we are all being forced to deal with this unbelievable amount of pain, why can't we do something as simple as see each other? Can we start there?