How 19th-century literature spread the archetype of the "evil abortionist" 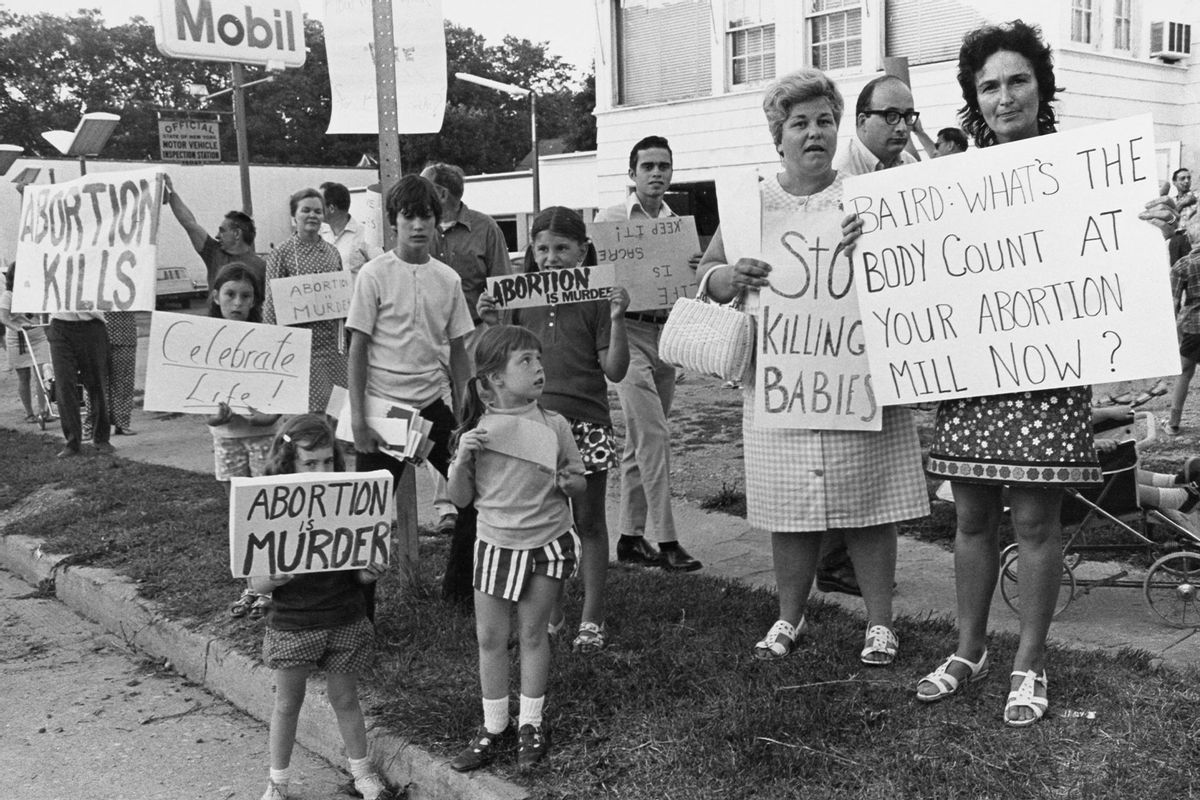 After the U.S. Supreme Court overturned Roe v. Wade, one aspect of the abortion debate stayed the same: lurid sensationalism.

On one side are allusions to dead babies. On the other, dead mothers, dystopian images of state-regulated bodies, and the terrifying loss of power and control.

In my book about the literature of abortion, I trace this rhetoric to the 19th century, when popular media described female physicians as villainous, untrained abortionists who committed infanticide. It was an easy way for publishers of dime novels and tabloid newspapers to make a quick buck. Yet it seems that the discourse connecting abortion to murder and evil really hasn't changed much since then.

Women in the U.S. were barred from medical schools and the professional practice of medicine until the end of the 19th century, despite the fact that women had been practicing family medicine and gynecology as healers and midwives for centuries. Many women continued to practice without formal training in the 19th century by giving themselves the title of "woman physician." The most notorious of these advertised abortive medicines and procedures in popular newspapers.

Largely because these women placed advertisements in cheap papers, the woman physician became associated with the idea of the smarmy, greedy and untrained abortionist. As archivist Martha R. Clevenger explains, in the 19th century, "the term 'female physician' was a derogatory epithet used to describe untrained female abortionists." Historian Regina Morantz-Sanchez also notes that "by far" the most common accusation made against female physicians was that they performed illegal abortions for profit. 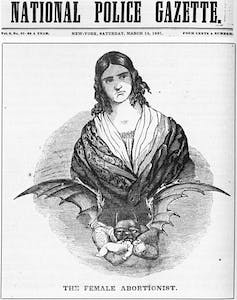 A drawing of abortionist Ann Lohman – also known as Madame Restell – in an 1847 edition of the National Police Gazette. Wikimedia Commons

Infamous 19th-century women with no official training who performed abortions like Madame Restell made national headlines because of unfounded accusations of infanticide, selling babies and killing women.

These headlines then became fodder for plots in popular dime novel fiction, further linking the image of an abortionist with a melodramatically drawn picture of "an atrocious woman."

Because she was so sensationalized in the popular press, Restell became the figure on which fictional accounts of female abortionists were based.

For example, in his 1854 novel "New York: Its Upper Ten and Lower Million," the popular 19th-century novelist and social reformer George Lippard creates a female abortionist character named Madame Resimer, who helps in a plot to murder an innocent woman.

Other 19th-century abortionist characters proliferated, variously characterized as "murderess," "hag," "she-devil" and "the instrument of the very vilest crime known in the annals of hell."

Perhaps the most insidious link these sensational novels and press reports made was the one between abortion and infanticide.

Andrew Jackson Davis' 1869 novel "Tale of a Physician," for example, tells the story of an evil female physician abortionist named Madame La Stelle, who gives her "entire attention to obstetrical cases and infanticides."

In a mid-19th-century novel by an anonymous author, the ironically named "Mother Higgins" is an untrained abortionist hired by wealthy men with pregnant mistresses to perform surgical abortions. She also commits infanticide after the children are born, and she helps the protagonist kidnap, rape and kill adult women.

Narratives like these exposed readers to the idea that if reproductive agency goes unregulated, greedy abortionists would even go so far as to callously murder newborns.

While these sensational tales depict the abortionist as swarthy and ugly, the women they harm reflect 19th-century Anglo-American feminine ideals.

The pregnant women had usually been tricked into affairs by sex-obsessed men, who then forced them to go to a place like Mother Higgins' lair. Sometimes these characters are killed by an abortionist – which is exactly what happens in a novel written by one of the 19th century's most popular sensationalist writers, Ned Buntline.

Buntline fictionalized the true story of Mary Rogers, a noted beauty and "respectable" girl from Connecticut found dead near the Hudson River in 1841. She was rumored to be the victim of a botched abortion by an unnamed abortionist whom Buntline calls a "she-devil."

Literature has a very long history of turning powerful women into monsters. Witches, sirens, shrews and masqueraders all depict female power as supernaturally given or surreptitiously used.

By the time abortion became illegal in every state in the late 19th century, the United States was embroiled in fears that women, including nonwhite women, would gain power and control through access to voting and jobs.

Female physicians embodied all of these terrors.

And so debates over abortion law in America have never been contained to disputes over medical procedures or questions of federal versus states' rights. Instead, for over two centuries, narratives about abortion have been stitched to American anxieties concerning gender, class, race and religion.

Whether it is the drawing of Madame Restell with a devil eating a baby or the baseless accusations that Planned Parenthood abetted the sex trafficking of young girls, media and activists have long linked abortion to horrific imagery.

Sensationalism, it seems, is ingrained in any conversation about abortion because the issue can reflect the country's deepest fears.

Associate Professor of English, University of Alabama at Birmingham