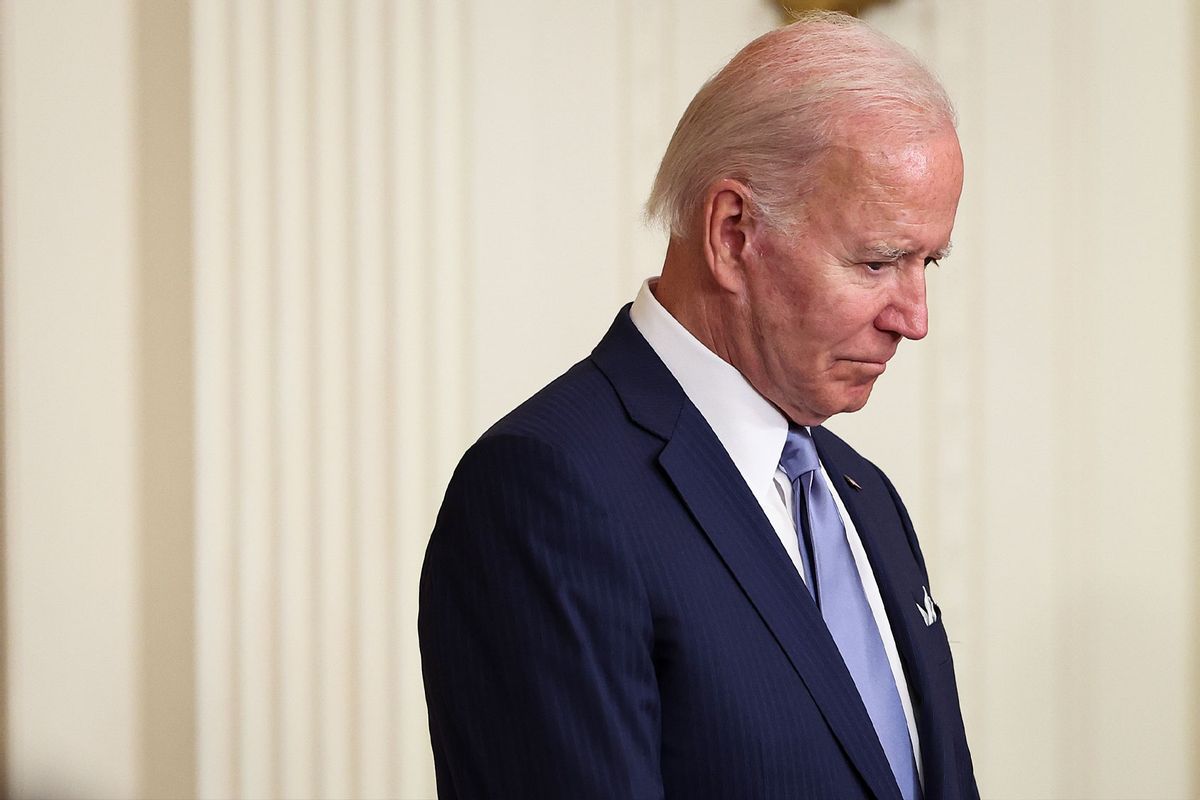 When it comes to political strategies, few are more potent than the deployment of the wedge issue: A hot button topic that will unify voters on your side while dividing your opposition. For Democrats going into the midterms, the overturn of Roe v. Wade should have been a classic wedge issue. The abortion issue doesn't just unify the Democratic base, it creates a wedge between the fundamentalists and the rest of the GOP base that isn't nearly so keen on the politics of prudery.

Polling shows this time and again: The pro-choice view unites Democrats while dividing Republicans. The smart politics for Democrats, then, would be to lean as hard as possible into the abortion fight. It won't just galvanize the Democratic base. It will demoralize the nearly 1-in-4 Republicans who really don't want to think about how unwise it is to keep voting against their own sexual freedoms.

Instead, however, President Joe Biden is doing the opposite.

The president is letting the abortion issue divide Democrats while Republican voters get to ignore their own responsibility for allowing the Roe overturn to happen. This failure at basic political strategy is surely not helping Biden's sinking approval ratings, either.

There's a lot of reasons that Biden's approval ratings are in the toilet, some of which — such as inflation — are not his fault. Add to that his, so far, impotent response to the Supreme Court's stripping of human rights and the result is debilitating polls, such as this one released on Monday by the New York Times, that show an astonishing 64% of Democratic voters want someone else to be the presidential nominee in 2024.

By denying people the choice to even take that risk, Biden is not only being a coward but imposing his cowardice on others who are ready to fight.

Biden's inability to rally his own troops and demobilize Republicans on the abortion issue is emblematic of his political failures overall. While he did issue an executive order in response to the Roe overturn, it felt weak for good reason. Mostly, the executive order is a punt: The creation of a "task force" to study the issue while Republicans act swiftly to shut down abortion services around the country. Let's face it, task forces are a notorious Democratic stalling tactic to avoid action. Biden used the "start a task force" strategy to end the discussion about Supreme Court reform early in his term. This feels like more of the same, especially since the opinion ending Roe was leaked two months ago, and there was no White House movement on this issue during that time.

Over the weekend the Washington Post published a devastating report on how the Biden administration is failing to meet the moment, which strongly reinforces the sense that Biden would just like the abortion issue to go away. The article describes the White House as "caught off guard by the timing of the decision," despite having had weeks of lead time to craft a response. Activists griped that Biden is failing "to step forward in a leadership role."

To make the whole thing worse, White House communications director Kate Bedingfield provided a statement that, instead of offering that leadership, bashed pro-choice activists for demanding it.

"Joe Biden's goal in responding to Dobbs is not to satisfy some activists who have been consistently out of step with the mainstream of the Democratic Party," she said in a flabbergastingly tone-deaf statement.

RELATED: Dr. Mark Goulston on why Democrats keep losing: They're afraid of their own anger

You could tell the quote was bad because the most ardent Biden apologists on social media didn't even bother to defend it. Instead, they pushed conspiracy theories implying the reporters made it up. But the snarling attack on activists was a direct quote from the White House communications director.

This activist view on this is the mainstream view of the Democratic Party — see that 84% strong disapproval of the Roe overturn. Moreover, activists are the kinds of people who Democrats desperately need on their side going into the midterms. Activists knock doors, make phone calls, and otherwise fight for you. For Democrats, such activists are primarily female. Now the main source of energy and votes for Democrats heading into the midterm elections has been insulted with a "simmer down, ladies" command.

In response to the outraged reaction to the Bedingfield quote, Biden did attempt clean-up on Sunday, calling on activists to "keep protesting" and reiterating that a "national law" is required to make abortion a right in all 50 states. Biden has, though far too slowly, admitted that it's time to end the filibuster to pass such a law, which is helpful. Still, his focus on a congressional solution doesn't alleviate concerns that he sees this issue as somebody else's problem to solve, so he can avoid doing more himself.

As Politico reported Monday, Biden is "underwater by double-digit margins in 11 districts he carried" in 2020.  Republicans are optimistic about "seriously contesting a fresh crop of about a dozen seats" in the House that are in districts Biden "won in 2020 by 9 points or more." The reasons are multifaceted, with inflation being at the top of the concerns. But, Biden is so unpopular that it's running deeper than that. As the New York Times poll shows, "94 percent of Democrats under the age of 30 said they would prefer a different presidential nominee." And those are the voters who are hardest to turn out during any election, but especially a midterm.

Biden's weak-kneed response on abortion really underscores where so much of the base disappointment is coming from. Here is an issue where healthy majorities of Democrats are in agreement, but Republicans are split. Even the very conservative Washington Examiner admits that "internecine battles arising over how far the [GOP] should go with laws affecting when a woman could terminate her pregnancy" are threatening to demobilize Republicans. A healthy chunk of the GOP voters who disapprove of the Roe overturn could be persuaded to sit out the midterms if they're repeatedly reminded that their politicians are a bunch of Bible-thumping prudes who want to throw you in jail for normal human sexual behavior.

Failure to use abortion as a wedge issue is political malpractice on a stunning scale.

In theory, this should be a golden opportunity for Biden and Democrats to get aggressive about defending abortion rights, by picking those high-profile fights that unite Democrats while splitting Republicans. Instead, Biden's behavior is slow-footed, reluctant, and reactive. For instance, as Democrats Rep. Alexandria Ocasio-Cortez of New York and Sen. Elizabeth Warren of Massacussetts have called for, Biden could issue an executive order allowing abortion services on federal lands inside red states. The White House already ruled this out, however, pointing out that law enforcement in red states might try to arrest and prosecute providers and patients who use these services. "Nearly everything the White House tries or has considered is at risk of drawing a court challenge," administration officials told Politico.

This timidity is why Biden's administration is falling apart.

Putting up clinics and daring red state prosecutors to do something about it is exactly the kind of high-profile fight that would fire up Democratic voters while making independent voters and pro-choice Republicans even more queasy about voting for the GOP in 2022. Anti-choice activists don't want to be caught arresting patients and providers because it reminds people of how crappy Republicans are. Yes, this move would mean asking people to take risks. But some of those activists that Bedingfield was so contemptuous of would be willing to take that risk. Risking arrest to draw attention to your cause is a notoriously effective tactic if done correctly. By denying people the choice to even take that risk, Biden is not only being a coward but imposing his cowardice on others who are ready to fight.

Whenever progressives point these issues out, apologists for Democratic leadership fall back on claiming Biden's hands are tied by the Senate filibuster. That is false, as the federal lands debate shows. But even on its own terms, that excuse is weak. Biden and Democratic leadership could be out there saying, right now, that voters only need to give them two more Senators in 2022 to overcome the noxious refusal by Democratic Sens. Joe Manchin of West Virginia and Kyrsten Sinema of Arizona to end the filibuster. But Democratic leaders can't even do that, because they clearly have other, cowardly senators who also want to keep the filibuster but are afraid to be public about it. It's just cowardice all the way down.

Under Biden's leadership, Democrats are failing at their most basic task of persuading voters to turn out this November.

There's a lot that's out of Biden's control right now, especially inflation. But there is simply no excuse for recoiling from the abortion rights fight and rejecting creative ideas that would draw coverage and attention to the issue. Failure to use abortion as a wedge issue is political malpractice on a stunning scale. We desperately need Democratic voters to turn out in huge numbers in 2022, to save not just Congress but state governments from being taken over by Republicans who fully intend to steal the 2024 election for Trump. But convincing those voters to turn out in the fall means putting up a fight now. Under Biden's leadership, Democrats are failing at their most basic task of persuading voters to turn out this November. Without that, democracy itself, not just legal abortion, is in serious danger.