In the first part of V.C. Andrews' prequel to "Flowers in the Attic," a death and then pregnancy are covered up 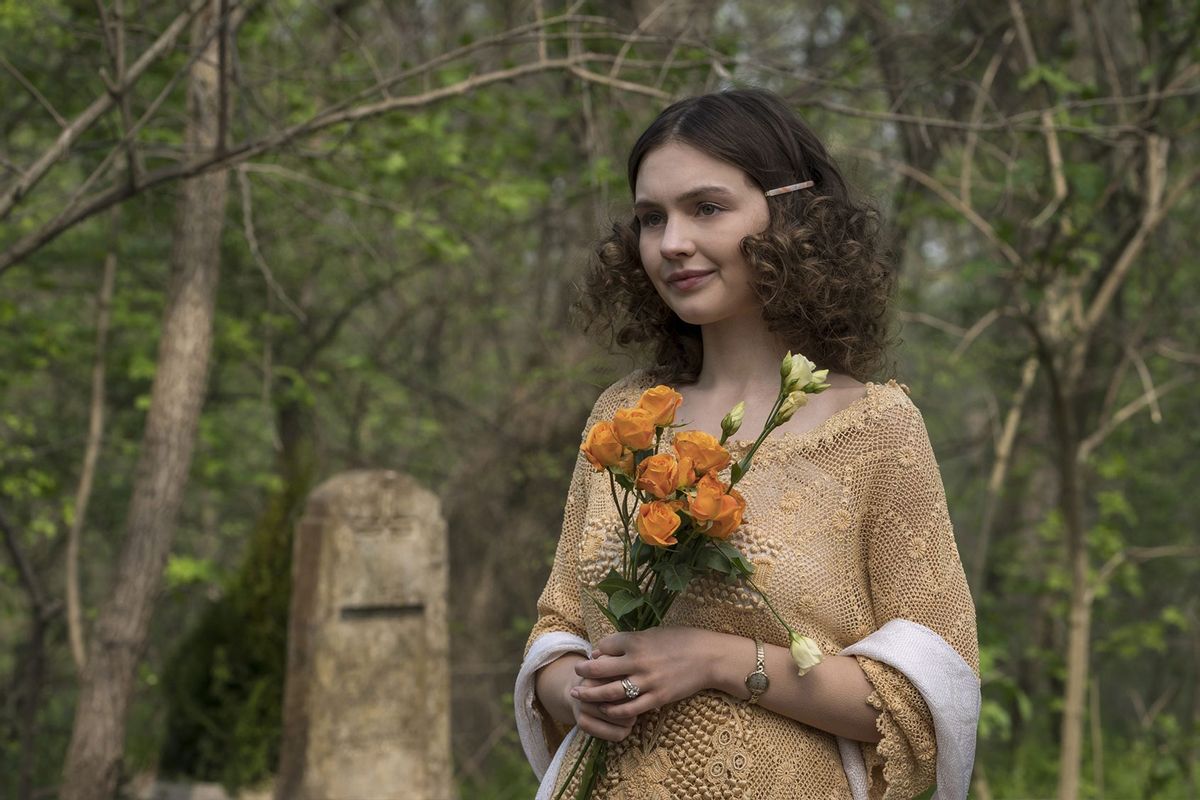 Alana Boden in "Flowers in the Attic: ﻿The Origin" (A+E/Lifetime)
--

"Flowers in the Attic: The Origin" made its unsettling debut on Lifetime with "Part 1: The Marriage" which set the stage for Olivia's revenge. Over the course of two hours, we were taken from the throes of her romance to Malcolm Foxworth to the shattering of her dreams as her husband revealed the obsessive, controlling monster he truly is.

Spoilers ahead of "Flowers in the Attic: The Origin" part 1

It was hard watching this inquisitive woman with a bright spirit and mind be continuously diminished and attacked by Malcolm. There was a brief glimmer of hope when it seemed, with Nella's assistance, Olivia would be able to make her escape. But then she received the heartbreaking news from John Amos that her father had died.

In Olivia's mind, with no business or money to fall back on as well no family but John Amos, she was effectively trapped at Foxworth Hall. Determined to create a better life for herself and her children in spite of Malcolm's cruelties, she worked hard to bring some semblance of vitality and color into the home.

Then, upon Garland and Alicia Foxworth's arrival to the estate, circumstances took yet another tragic turn. The elder Foxworth, whose treatment of his very young wife contrasted greatly with his son's treatment of his own wife, died of a heart attack. At least, that's the story Dr. Curtis went with once Olivia persuaded him not to do an autopsy.

However, when Olivia had found Garland, she'd walked in on what clearly had been an altercation. Her father-in-law was dead on the floor, Alicia was horrified, and Malcolm was stunned and bearing scratch marks on his forearms.

Olivia didn't ask what happened, but she knew something wasn't right. Garland's death left Alicia a widow and a single mother to their infant son, Christopher. It also left her vulnerable to Malcolm. Olivia assumed that with his father dead, her husband would leave his grieving stepmother alone, but he did not. He was raping Alicia in his mother's old bedroom.

Sickened, Olivia took off aimlessly through the woods of the estate until her father's words to her about having everything she needed in her heart helped her formulate a plan. The first step was using Garland's death against Malcolm.

Did Malcolm kill his father in "Flowers in the Attic: The Origin"?

Malcolm committed patricide. His father had come upon him in the middle of his assault against Alicia. He tried to stop his son, but Malcolm killed him for interfering. It was Olivia who covered up what truly happened, and she used her knowledge of the incident as leverage to secure her own sons' future.

Malcolm despises their very existence because they aren't girls, but he'll have to ensure that his sons have a trust set aside for them to the tune of two million dollars each otherwise Olivia will tell everyone what he did. It'll burn her, too, which is why she hasn't said a word, but she'll do it if he doesn't give her what she wants. She also shares with Malcolm what Alicia confided in her, which is that she's with child.

Why did Olivia tell Malcolm that Alicia is pregnant in "Flowers in the Attic: The Origin"?

In order to get Alicia out of the situation that she's in, Olivia had to be honest about her pregnancy. What Malcolm wants is a daughter. The promise of that possibility will keep him at bay.

Olivia tells him that they'll make it look like Alicia's going away so that the servants think she's left Foxworth Hall. Then, under the cover of night, they'll move her into the east wing where she'll stay for the duration of her pregnancy. Olivia will pretend that she's pregnant so that when the time comes, they can claim Alicia's child as their own.

Such a charade would allow Alicia to go on once the baby is born. She'd be able to live her life with her son without having to care for her rapist's child. Olivia will also ensure that Alicia receives double her inheritance so that she can have a new life and be as comfortable as she can be in spite of everything that had been done to her.

What is Olivia's revenge in "Flowers in the Attic: The Origin"?

"Part 1: The Marriage" ends with Olivia grabbing a pillow and stuffing it under her dress so that she could appear pregnant.

While her revenge isn't detailed yet, it seems that it'll have something to do with the birth of Alicia's child and the leverage Olivia has over Malcolm that's allowed her to put him under her control for the time being. Hence why they're now sharing office space, she's secured her son's future, has found a path for Alicia to soon be free, and is exerting more control over this impossible situation that she's found herself in with this marriage.