He's running: The specter of Donald Trump looms over the GOP 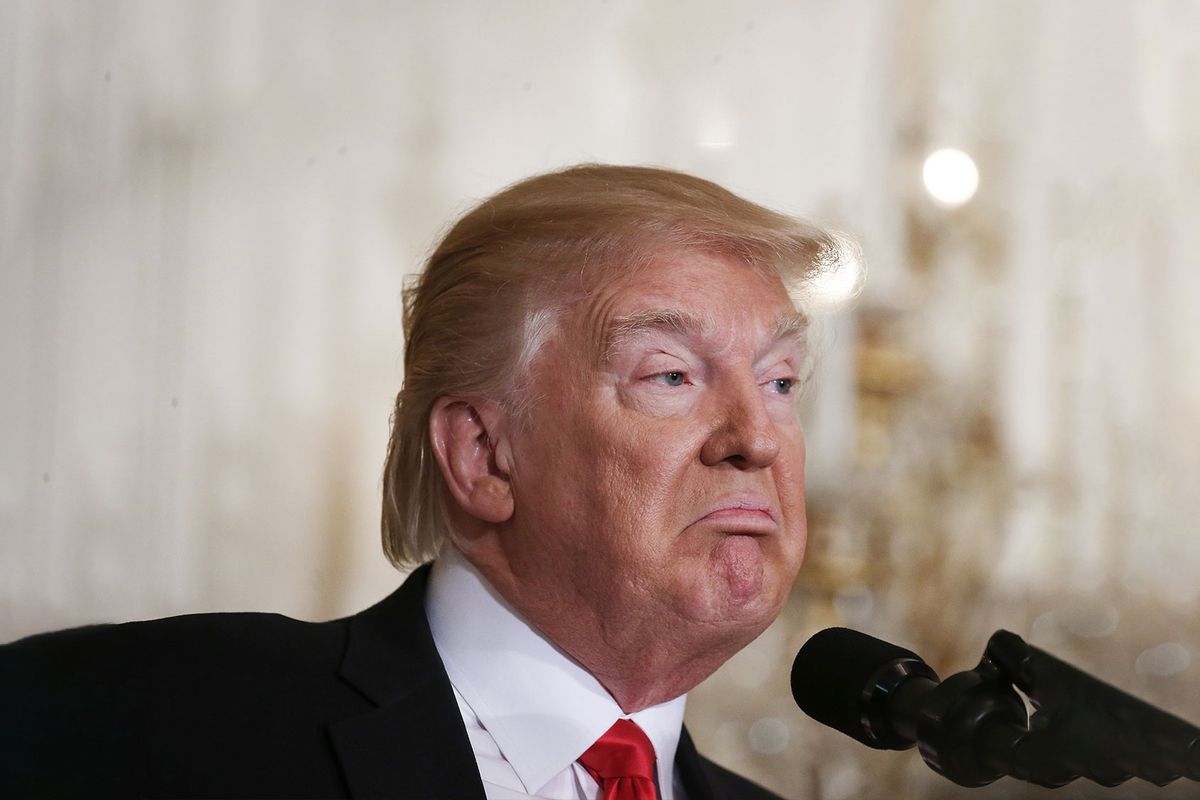 For months the conventional wisdom has held that Democrats are in for an epic shellacking in November, perhaps on a scale that has never been seen in American history. This conventional wisdom is so hardened that if you watch cable news opinion shows or read the op-ed pages of the national papers, you'd think we might as well cancel the elections and just hand the reins over to California Republican Kevin McCarthy in the House and Kentucky Republican Mitch McConnell in the Senate. Just call it a day already. The assumption is that the Democratic congressional majority isn't just a lame duck, it's a dead duck.

There is certainly good reason to believe that the Democrats are facing a major loss. After all, the party in power almost always loses seats in the midterms. It's often been because the president brings in a number of marginal winners on his coattails and the party loses them again when he isn't on the ballot. (2002 was the only recent exception and that happened because of 9/11 and the fact that George W. Bush didn't really win his election --- which meant that he didn't have any coattails to lose.)

Another big factor in determining midterm success and failure is the president's approval rating, as you will hear every pundit and talking head repeat ad nauseam. This correlation is attributed to the idea that mid-term elections are referendums on the president and people will lodge their complaints against him at the ballot box. Since Joe Biden's approval rating is very bad at the moment, hovering somewhere in the mid to high 30s, that spells big trouble for the party.

And then there is the idea that the generic ballot (which party will you vote for in November?) determines which specific candidates people will vote for in the end, the assumption being that they will vote the party line. For months, the generic ballot had Republicans up double digits, which helped cement the so-called beltway wisdom. With inflation running at a 40-year high, and the pandemic still hanging around, even the excellent job market can't quiet the depressing feeling that nothing is working right anymore.

RELATED: Democrats' time to pounce: Republicans suddenly find themselves vulnerable ahead of midterms

Right now, if you were to ask anyone who is somewhat informed about Democratic prospects in November they would say that it's going to be a bloodbath. And from what we read, the Republicans in both chambers of Congress are already teeing up all the investigations and articles of impeachment so they can hit the ground running. After all, they have no agenda other than Trumpian vengeance, obstruction and bootlicking. But if you look a little bit more closely, this election may not unfold as everyone assumes it will.

All those circumstances I mentioned are true, but there are times when history just isn't a perfect guide.

First of all, the presumed "red wave" in the House was largely predicated on the notion that Republicans were going to gain a large number of seats in redistricting. That didn't happen. They gained a few but for the most part, the heavy gerrymandering already took place back in 2010 and there just isn't a lot of room to create more districts for themselves. As a result, there are actually very few seats up for grabs, with Democrats mostly in solidly blue districts and Republicans in safe red ones. It's possible that a bunch of blue districts will go for the Republicans this time, I suppose, but I wouldn't bet on it, particularly since the most recent generic ballot polls show that the Democrats are now running even with Republicans.

CNN's Ron Brownstein looks at some of the latest polling data and sees the suggestion of a "decoupling" of the vote from the president's approval rating. Polls in several races show that among people who disapprove of Biden's performance, many more than usual are still planning to vote Democratic. That is at least somewhat explained by the fact that Biden's approval rating is so low largely because Democrats disapprove of him but they are not about to vote for some of these kooky candidates the Republicans are nominating.

That is yet another reason why this may not go the way the conventional wisdom blows. This election may be turning into a choice election rather than a referendum election, with voters being asked to choose between right-wing extremists and normal Democrats.

The GOP base is very happy about that but there are plenty of independents and centrists who are appalled by candidates such as Doug Mastriano and Dr. Mehmet Oz in Pennsylvania and Herschel Walker in Georgia who are completely out of the mainstream. Polls in statewide races are already showing this.

Axios reported again on Thursday that Mitch McConnell is not a happy fellow:

Senate Minority Leader Mitch McConnell (R-Ky.) has been sounding this alarm for months: electing fringe candidates with checkered pasts could squander a golden chance to reclaim power. Now, McConnell is left hoping for a red wave so wide and powerful that candidate quality is irrelevant.

He made his MAGA bed with a bunch of My Pillows and now he has to lie in it.

Democratic strategist Joe Trippi believes that this may also be dispositive in the House because "people are going to be shocked in their districts when they realize who the Republicans have nominated." They are literally nominating QAnon believers and January 6 insurrectionists.

Finally, there are the three big issues that have moved to center stage in this election.

There is the Republican threat to democracy that's being exposed on TV screens all over the country this summer. As Trippi says, "though we may not want to believe it, the last truly democratic election may be at our doorstep."

There is also the issue of guns and mass shootings. Republicans are so devoted to their firearms fetish that this week 168 of them even voted against a bill called the  Active Shooter Alert Act this week. Apparently, it's an infringement of 2nd Amendment rights to let people know they need to take cover from a gun-toting psychopath. They are way out of the mainstream on that issue.

And there is the reversal of Roe v. Wade, the consequences of which we are starting to see play out in states and localities across the country in ghastly living color. The polls show that this is having a galvanizing effect on the Democratic electorate and they are now as committed to voting in November as the Republicans.

RELATED: The fall of Roe has energized the left: Now will it wake up the Democrats?

I would also add that there is a grotesque orange cloud hovering over the GOP in the person of Donald J. Trump who is planning to announce his candidacy any time now and remind everyone in the country that the Republican Party has been remade in his image and still dances to his tune. When asked what he thought about Trump entering the 2024 race, Joe Biden said he welcomes it. No doubt. Biden may be unpopular but in head-to-head polls, he still beats Trump.

None of this is to say that Democrats are a shoo-in or that this big red wave won't materialize. All the historical data is in the GOP's favor. But we are not living in normal times and the Republicans are not a normal party. Remember: in a country that could elect Donald J. Trump to be president, anything can happen.