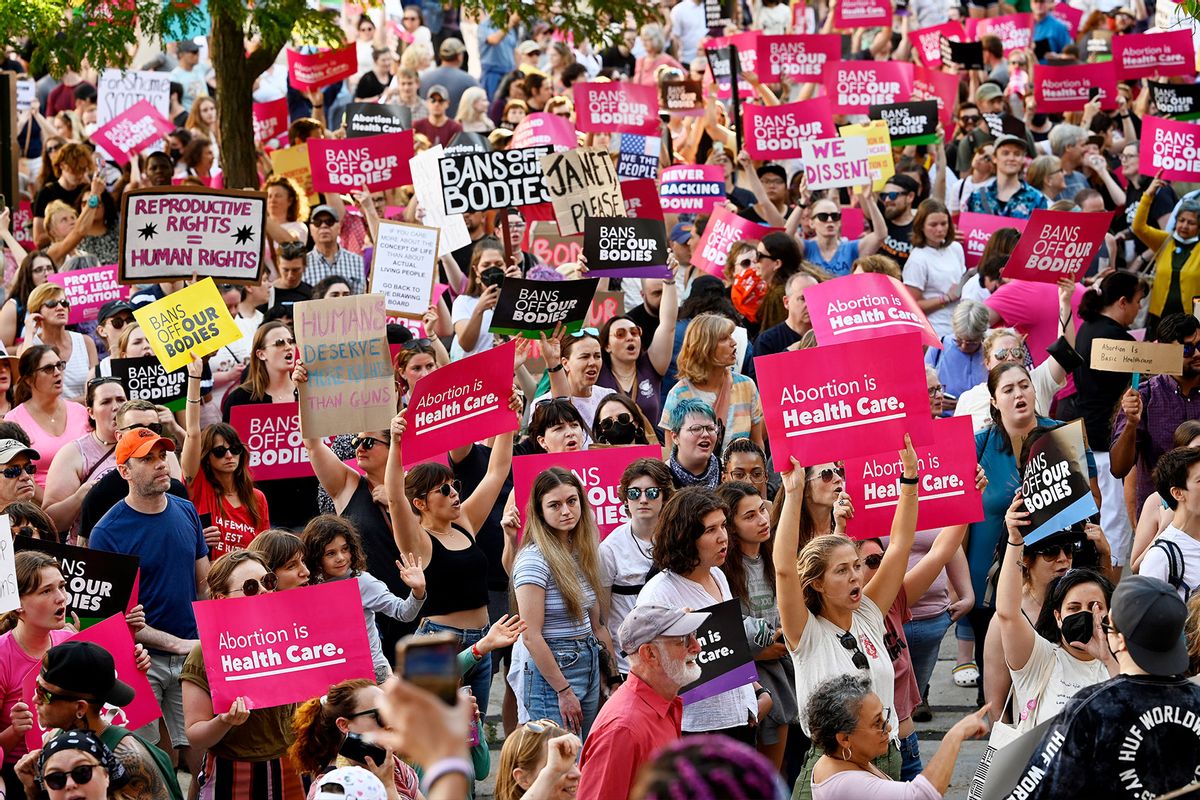 Over the weekend, the Republican Attorneys General Association (RAGA) hosted a private retreat for corporate sponsors in Palm Beach, Florida to ostensibly raise money for its sweeping assault on abortion access, according to an exclusive report by CNBC.

The swanky dinner reportedly featured C-suite executives from the likes of Comcast, General Motors, Walmart, Match Group, Anheuser-Busch, Juul Labs, Johnson & Johnson, Koch Industries and Lowe's, according to a list obtained by the outlet.The luxurious event will reportedly took place over the course of three days at the Breakers resort, an oceanfront five-star hotel, where rooms start at roughly $830 per night. It reportedly involved a golf outing, a cigar and whiskey reception, tennis, and deep sea fishing.

RELATED: The reputational cost of impartiality: How long can Corporate America stay silent?

Only seven corporations responded to CNBC's inquiry as to whether any of them would attend.

"General Motors has been a long time supporter of the Democratic Attorneys General Association and the Republican Attorneys General Association," Jeannine Ginivan, a spokeswoman for General Motors, told CNBC, neither confirming nor denying the company's attendance. "GM believes that through continuous engagement with these organizations it has the best opportunity to build an understanding around issues important to GM and the auto industry."

"While we defer to Congress, state legislatures, and the courts when it comes to policy on this issue, we will continue to support our employees and their dependents through our company-sponsored health care plans and programs," said Kaitlin Craig, a spokeswoman for Anheuser-Busch, who likewise refused to reveal whether the company will be there.

According to CNBC, the event is designed to ramp up donations from corporate sponsors for the purposes of the group's anti-abortion crusade. As the group reportedly put in a June email, "every donation will help the Republican Attorneys General combat the Democrats' pro-abortion agenda and stand tall for life." Historically, the group has often been the top spender in state AG races. According to investigative reporters Donald Moore and David Shaw, "RAGA has also drawn more than $370,000 this cycle from the Rule of Law Defense Fund, an affiliated policy nonprofit that does not disclose its donors and was an organizer of the Jan. 6 protest that preceded the riot at the Capitol Building."

Noting that "some of RAGA's biggest corporate donors this cycle have tried to portray themselves as allies of women's reproductive health," including Comcast, Sludge reports that "online dating company Match Group said in early September of last year it would set up a fund to allow Texas employees to seek abortion care out of state. The company donated $125,000 to RAGA on Sept. 20, the bulk of the nearly $137,000 it gave last year. In March, Citigroup announced it would also step up to cover travel costs for employees affected by Texas' abortion ban. The company gave $75,000 to RAGA last year":

Uber announced in September it would set up a legal defense fund to help its contractor drivers who could be sued under the Texas abortion ban for simply transporting passengers. About two months later, on Dec. 27, the company gave $50,000 to RAGA. Other top corporate donors to RAGA this cycle include Comcast, AT&T, healthcare company Centene, and gaming company Caesars Entertainment, as well as trade groups like PhRMA, the American Petroleum Institute, and the Pharmaceutical Care Management Association.

At the same time, over the past several decades, a broad swath of Corporate America has funneled millions of dollars in campaign contributions to the Republican Party, inadvertently bankrolling the GOP's war on abortion. According to Popular Information, thirteen major corporations – like Amazon, AT&T, and Coca-Cola – have supplied the party with about $15 million since 2016.