While Republicans like Ted Cruz push for the end of same-sex marriage, DeSantis remains relatively mum on abortion 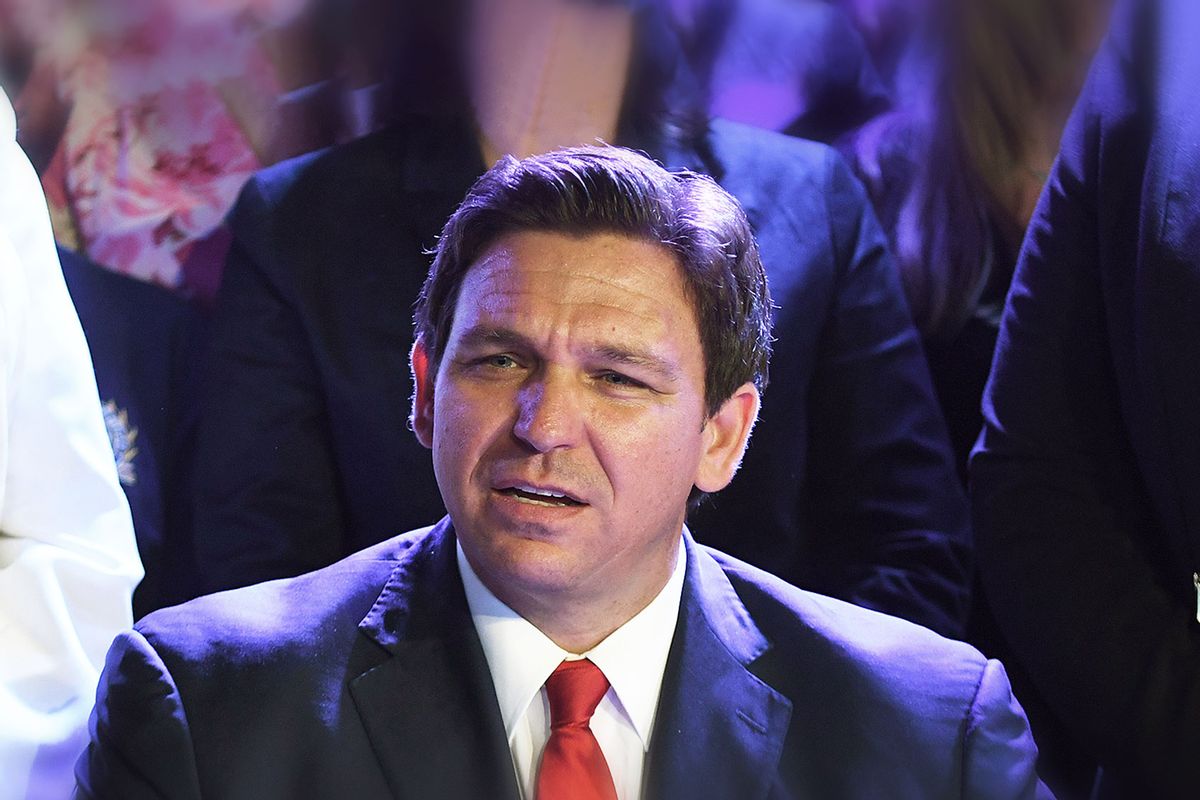 Governor Ron DeSantis signs Florida's 15-week abortion ban into law at Nacion de Fe Church in Kissimmee. The law, which goes into effect July 1, bans the procedure after 15 weeks of pregnancy without exemptions for rape, incest or human trafficking, but does allow exemptions in cases where a pregnancy isa serious risk to the mother or a fatal abnormality is detected if two physicians confirm the diagnosis in writing. (Paul Hennessy/SOPA Images/LightRocket via Getty Images)
--

The GOP's most aggressive culture warrior, Ron DeSantis, gave the keynote address at the first annual "The Liberty Moms" meeting in Tampa, Florida last weekend. He was there to lend his explosive star power to their self-described agenda of "battling mask mandates in schools, banning library books that address sexuality and gender identity, and curtailing lessons on racial inequity and discrimination." He is, in fact, their one true leader, using their authoritarian intimidation platform as his re-election agenda and possible springboard to the White House.

Considering his position as a general in the culture war, you'd think that DeSantis would be first in line with abortion bans and fugitive pregnant women laws like so many of his fellow GOP leaders. Instead, he stood by silently while the Attorney General of Ohio rushed right into the fray to doubt the now confirmed story of a 10-year-old rape victim who had to be transported to Indiana by her mother to obtain an abortion because she missed the 6-week deadline by 3 days. Not to be outdone, the Attorney General of Indiana immediately declared that he would investigate the doctor who performed the procedure even though abortion is still legal in the state (for the time being.) The state of Texas, meanwhile, got the conservative judiciary involved by suing the Biden administration over its guidance that emergency rooms are still obligated to perform abortions in case of a medical emergency, calling it an "attempt to use federal law to transform every emergency room in the country into a walk-in abortion clinic" and forcing "hospitals and doctors to commit crimes and risk their licensure under Texas law." And with a bracing amount of clarity even Texas can't claim, Idaho Republicans voted to reject a "life of the mother" exception from its party platform.

Talk about pushing the envelope.

And at the federal level, Senate Republicans helpfully blocked a bill that would have protected the right of pregnant people to travel from one state to another. It's probably only a matter of days before a state passes a law restricting such movement.

These and other actions in red states all over the country show that DeSantis is behind the right-wing curve. He defended the state's ban on abortions after 15 weeks, without exception for rape and incest, and blandly offered to "work to expand pro-life protections" — but that's about it. Beyond that, he's been uncharacteristically reluctant to wade into the greatest culture battle of our time. The New York Times explained that he is under pressure from Republicans to adopt the draconian measures that have electrified the anti-abortion zealots throughout the country but remains reluctant because he feels it might hurt his chances at re-election and a possible presidential run.

It's rare for DeSantis to be out of step with the extreme right but on this one he is and in a big way.

One of the leaders of the far right legal movement, James Bopp, the counsel to National Right to Life, a leading activist curtailing voting rights, and the man who took Citizens United to the Supreme Court and won, wrote the abortion ban "model law" that's being adopted all over the country. There are no exceptions for rape and incest, as he told Politico:

"She would have had the baby, and as many women who have had babies as a result of rape, we would hope that she would understand the reason and ultimately the benefit of having the child,"

There is no one in America more in touch with the hardcore right than James Bopp. This will be the new baseline. And because his template does generously allow for an exception to be made if the person being forced to give birth will die otherwise (subject to very stringent rules to be set by know-nothing fanatics in state houses) his position will be considered mainstream. That makes DeSantis a RINO by comparison.

The Florida governor and presidential hopeful does have one issue, however, which he can point to as being in the vanguard that might just get him off the hook: the reversal of LGBTQ rights. He's a clever politician so he started off with the issue of transgender kids and has gradually expanded it to businesses, relationships with their gay employees, and more recently siccing child protective services on parents who take their kids to gay-friendly events like drag shows. (So much for parents' rights.) He's passed dystopian legislation that's been dubbed the "don't say gay" bill, which prohibits teachers from discussing gay issues in schools. He clearly believes an anti-LGBTQ crusade offers a fertile culture war battlefield.

That flies in the face of Republican messaging that says gay rights aren't really on the agenda.

From Justice Samuel Alito, who assured the nation that his reasoning in the Dobbs decision overturning Roe v. Wade meant "nothing in this opinion should be understood to cast doubt on precedents that do not concern abortion," to the right-wing zealot Sen. Josh Hawley, R-Mo., who insisted he believes "that Obergefell was wrongly decided, but I also think that at this point it is also settled law. I'm not aware of any concerted effort to get Obergefell overturned, and I don't think that this opinion will result in that happening," Republican officials are generally working overtime to reassure the public that they don't have any intention of overturning marriage equality.

Hawley's statement that it's "settled law" is patently absurd considering that the Supreme Court just overturned a constitutional right that was decided 50 years ago and upheld numerous times over all those decades while marriage equality was decided just 7 years ago. No one can be confident they won't overturn it and "send it to the states" where citizens' rights go to die.

They're talking about it. Here is Sen. Ted Cruz, R-Tx., over the weekend:

And lest anyone thinks this isn't an official position of the Republican Party, they should take a look at the last GOP platform, carried over from 2016, in the part where they discuss appointing Supreme Court justices. They've only gotten more extreme since then:

Only such appointments will enable courts to begin to reverse the long line of activist decisions — including Roe, Obergefell, and the Obamacare cases — that have usurped Congress's and states' lawmaking authority, undermined constitutional protections,
expanded the power of the judiciary at the expense of the people and their elected representatives, and stripped the people of their power to govern themselves

The person who made that addition to the platform (and made sure that all inclusive language was kept out) was none other than James Bopp, the triumphant, right-wing, mastermind who represents National Right to Life. He's an anti-LGBT warrior as well and he's on a roll. Ron Desantis is too.