“He did them a huge favor”: Paul blows up Biden and McConnell's “secret deal” over personal snub 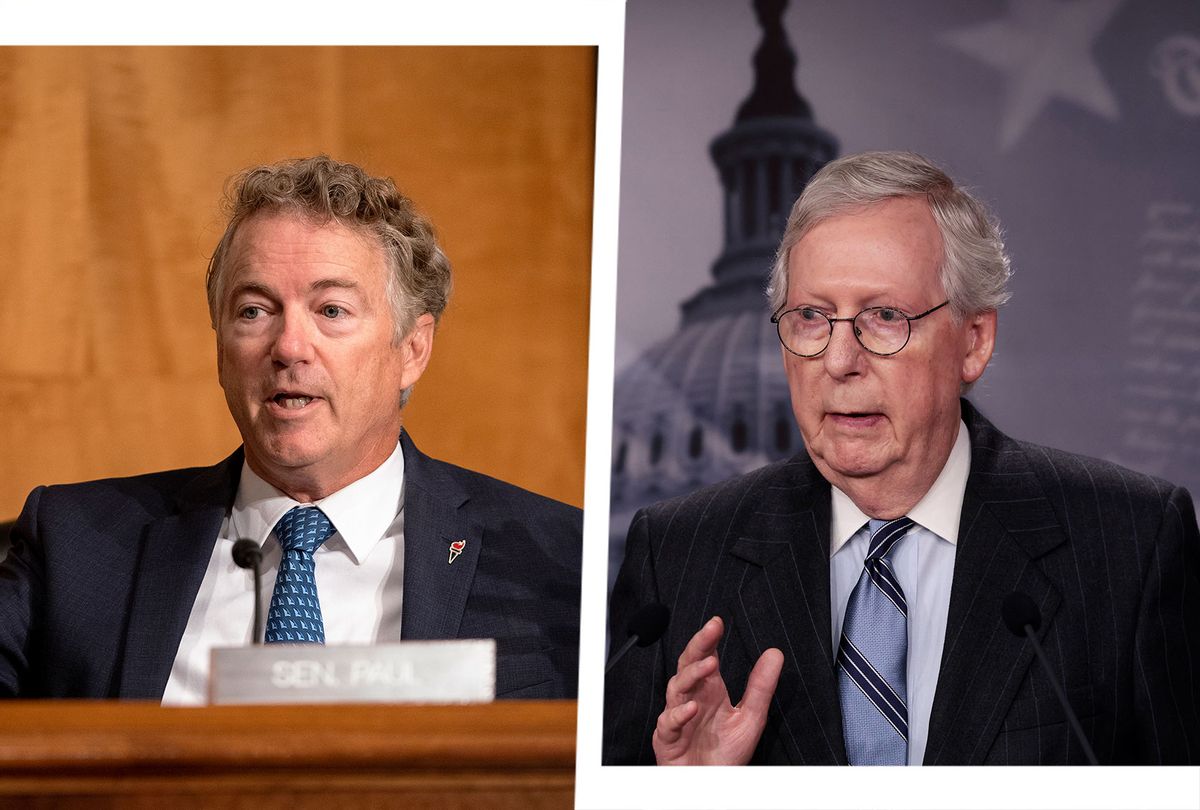 President Joe Biden intended to nominate anti-abortion attorney Chad Meredith, a Federalist Society member who helped lead former Kentucky Gov. Matt Bevin's assault on reproductive rights, to a federal judgeship in Kentucky, according to emails released by Gov. Andy Beshear. Beshear and other Democrats blasted the pick, suggesting it was part of a deal between Biden and McConnell. The White House ultimately dropped the plan last week, though the reversal came after Paul refused to return a "blue slip" consenting to Meredith's nomination — not due to growing opposition from the president's own party.

Paul told reporters on Monday that he supports Meredith but blocked the nomination because he was snubbed by McConnell.

"McConnell did whatever secret deal he did with the White House without talking to me," Paul told CNN. "And so we simply said that we're not against Meredith, but McConnell is going to at least discuss it with his other state senator."

Paul said he learned about the Meredith pick from the FBI during a background check and placed the blame on McConnell for sinking the nomination.

"We never heard about it from McConnell's office," he told Politico. "And his people simply said, 'you can't do this but we can.' You know, 'we're so powerful, we can do whatever we want.'"

A source with knowledge of the process disputed Paul's claim, telling the outlet that the two senators' aides had discussed the nomination "repeatedly."

"Senators are together a lot, there's no lack of access between any senators, certainly senators of the same party," the source told Politico. "The conservative base does not care about an inside the Beltway process argument. They would like a Federalist Society rock star in a lifetime judicial seat."

It's unclear that Meredith could have been confirmed by a Democratic-led Senate, where Judiciary Chairman Dick Durbin, D-Ill., was reluctant to even hold a hearing for Meredith, according to the report.

"I said, what's in it for us?" Durbin told The New York Times last week. "They haven't given me a specific answer."

Beshear repeatedly criticized the pick, calling it "indefensible." Beshear argued that Meredith should be "disqualified" from consideration over his role in granting controversial pardons to violent offenders at the end of Bevin's administration.

"I mean, these are individuals who were pardoned who are walking free today, despite committing terrible violent crimes," Beshear told reporters last month. "Seeing this, I don't know how the president could say he's for public safety."

Other Democrats lit into Meredith for his role in representing Bevin's administration in court as it sought to drastically restrict abortion in the state.

"The last thing we need is another extremist on the bench," Rep. John Yarmuth, D-Ky., told the Louisville Courier-Journal, suggesting that the pick was part of "some larger deal on judicial nominations" between Biden and McConnell.

McConnell denied that he cut a deal with Biden, calling it a "personal friendship gesture." White House chief of staff Ron Klain conceded that Meredith was "certainly not the kind of person we would normally nominate," McConnell told the Times, but the pick would effectively trade a sitting Republican-backed judge for another. "It is not giving away a seat, he's got bigger stuff on his plate than this," McConnell said.

He squarely placed the blame on Paul for killing the nomination.

"I suspect the White House is relieved; I suspect Dick Durbin is relieved; and I suspect that the political people in the Biden team are relieved that Rand Paul blew this up," he told USA Today. "He did them a huge favor."

"The net result of this is it has prevented me from getting my kind of judge out of a liberal Democratic president," he told the Times.

Paul has repeatedly feuded with McConnell ever since he defeated the GOP leader's preferred candidate, former Kentucky Secretary of State Trey Grayson, in 2010. Paul, one of the more libertarian-leaning members of the party, has clashed with leadership on foreign policy, defense issues, and government spending.

Paul said he would have liked to see Meredith on the bench but pushed back over McConnell's handling of the process.

"We have no reason to be opposed to Chad Meredith, other than we want at least the courtesy of … the minority leader, thinking that he's not so important that he doesn't have to talk to his fellow state senator," he told Politico. "The left ended up hating it, but also even his colleagues — myself — weren't too happy about him doing it without having any discussion."

McConnell raised the possibility that Paul might have felt that it was his turn to put forward a judicial candidate but the two senators did not have an agreement on such matters.

"The president would not have been taking a recommendation from Rand Paul," McConnell told the Times, "I can assure you."

on the Kentucky GOP mess