Moms for Liberty: "Joyful Warriors" in the fight to demolish public school

At the Moms for Liberty summit, they gave Ron DeSantis a sword. That wasn't the strangest or scariest part by far 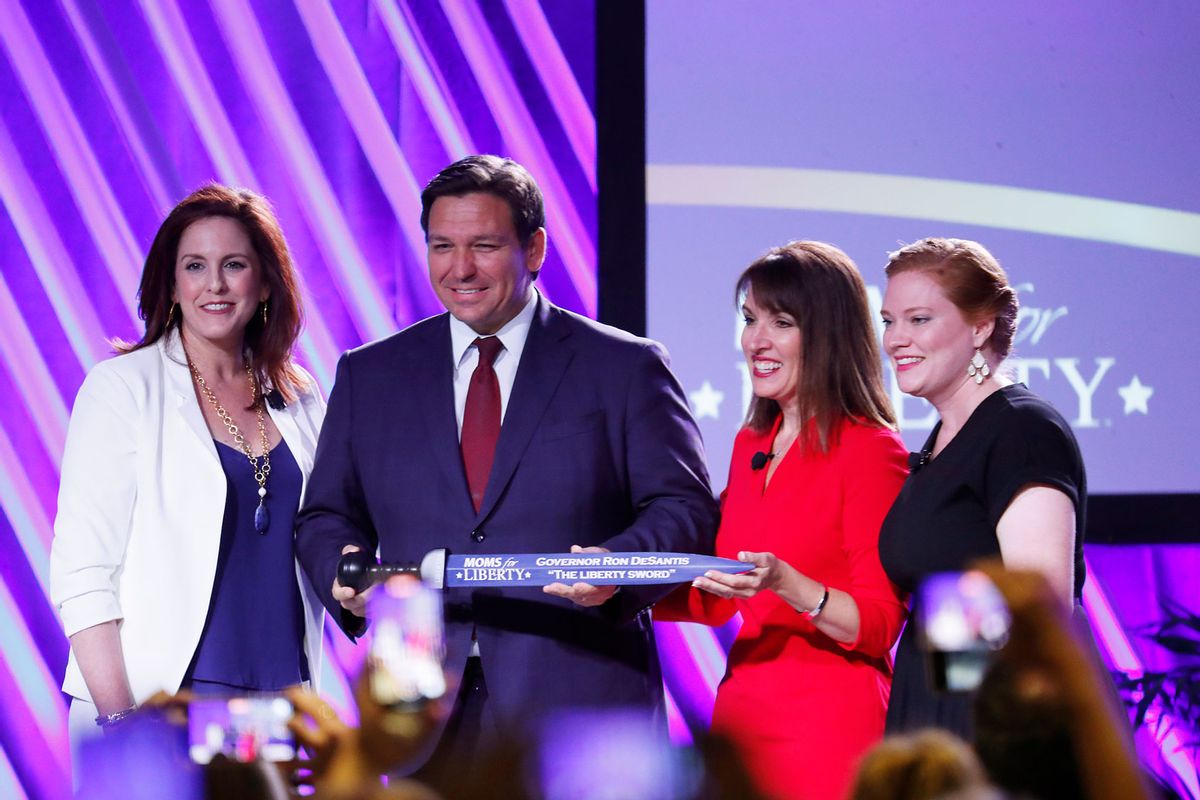 Moms for Liberty founders Tiffany Justice (L) and Tina Descovich present the Liberty Sword to Governor Ron DeSantis before he speaks during the inaugural Moms For Liberty Summit at the Tampa Marriott Water Street on July 15, 2022 in Tampa, Florida. (Octavio Jones/Getty Images)
--

Last weekend in Tampa, about 500 members of the conservative education advocacy network Moms for Liberty gathered for their first national summit. True to the spirit of a group that has helped drive many of the most heated school board confrontations of the last two years, the summit's most headline-grabbing moment came when Betsy DeVos, the former secretary of education under Donald Trump, called for the abolition of the Cabinet-level department she used to run.

"I personally think the Department of Education should not exist," DeVos said, sparking cheers and a standing ovation, during a lunchtime session named for her recent book, "Hostages No More: The Fight for Education Freedom and the Future of the American Child." It's hardly the first time DeVos has suggested as much (she did so just last month, at an event for conservative think tank American Enterprise Institute), and she's also hardly alone, as a growing number of Republican politicians and conservative leaders have called for demolishing the DOE in increasingly strident attacks on public education, including a 2021 bill supported by right-wing House Republicans like Lauren Boebert and Matt Gaetz.

But there was so much more: Florida Gov. Ron DeSantis receiving a ceremonial wooden "liberty sword" for his efforts in support of "parents' rights"; right-wing education activists warning parents that public schools have become "Maoist thought reform prisons" intent on transforming their children into "change agents"; former HUD Secretary Ben Carson promoting his new "Little Patriots" curriculum; Sen. Rick Scott, R-Fla., promising the audience that, by running for school board, they might provide the coattails congressional and Senate candidates could ride upon; and — likely the real point of the gathering — a suite of nine closed-door strategy sessions training Moms for Liberty activists to launch exactly those kinds of campaigns.

The range and caliber of conservative leaders Moms for Liberty (M4L) were able to attract to the summit is testament to how quickly the group has grown since its founding in 2021 by three conservative Florida women tied into local school board politics: former school board members Tina Descovich and Tiffany Justice, who run the group today, along with current Sarasota County School Board member Bridget Ziegler, coauthor of Florida's 2021 Parents' Bill of Rights law and wife of Florida Republican Party vice chair Christian Ziegler, who once enthused that M4L was succeeding where he'd long failed — to mobilize millennial women for the GOP and drive its members to become "foot soldiers" for Ron DeSantis.

Although M4L typically represents itself as nonpartisan and grassroots, the group's ties to powerful conservative leaders and institutions runs deep, as Olivia Little reported at Media Matters last fall. While the group's finances are largely opaque, it has received donations from the right-wing Conservatives for Good Government, it hosted a fundraiser (top-tier tickets were $20,000) with former Fox News host Megyn Kelly, and it counts a number of Florida elected officials as public allies. In the Tampa Bay Times earlier this month, Maurice Cunningham, author of "Dark Money and the Politics of School Privatization," argued that M4L had grown "at a pace that only a corporation's monetary resources could manage" and noted that many of its leaders had backgrounds in marketing, communications and political strategy.

Moms for Liberty typically presents itself as a nonpartisan grassroots organization. Its connections to powerful conservatives suggest that is complete nonsense.

Today, Moms for Liberty has around 95,000 members in some 200 county chapters across close to 40 states. Over the last year and a half, the group has led conservative education movements and school board protests focused on COVID-19 mask or vaccine mandates, "critical race theory" in the classroom, LGBTQ rights and inclusion, and efforts to restrict or ban books parents claim are either sexually explicit or too racially sensitive for children.

At times, the group's influence has been linked to increased harassment of school officials. As Tyler Kingkade reported at NBC News, the group has offered bounties for tips on teachers who they claim are using critical race theory in the classroom. In Brevard County, Florida, school board member Jennifer Jenkins recounted that M4L protests were followed by parents calling her a "pedophile," yelling at her five-year-old, "Be careful, your mom hurts little kids!" and making threats like, "If you thought January 6 was bad, wait until you see what we have for you!" One prominent M4L supporter, Florida state Rep. Randy Fine, posted Jenkins' phone number on Facebook, encouraging followers to let her "know exactly how you feel." Someone filed a false child abuse report against her.

M4L has made connections at times with harder corners of the far right. Later this month in Texas, one local chapter is hosting anti-LGBTQ activist Kelly Neidert, who, as Salon has reported, is a key figure in a number of ugly protests against Pride celebrations in the state who was permanently suspended from Twitter last month for tweeting, "Let's start rounding up people who participate in Pride events."

None of that was evident in M4L's first national gathering, which was titled the "Joyful Warriors" Summit, in keeping with members' reference to each other as "warriors" and "war moms." Instead, the three-day summit was awash in both patriotic and religious messaging, with an operatic rendition of the national anthem, opening invocations that called on God's help as M4L "wage[s] war" against their adversaries, M4L-branded pocket Constitutions and buttons from Turning Point USA reading, "No matter what my teacher says, I'll always love America." On Saturday night, local chapter leaders received awards named after female figures from the American Revolution.

The group also appeared to have the gratitude of DeSantis, who ran well over his allotted speaking time on Friday morning, recounting his moves to implement conservative education policies in Florida, from banning mask mandates to banning classroom acknowledgement of LGBTQ issues to banning discussions of race that make people uncomfortable to banning textbooks that include what he called "woke math." (Because Florida is such a big state, DeSantis said, when his Department of Education complained, the text publishers "took the woke out and sent us back normal math books.")

After Florida education officials complained about math textbooks, DeSantis told his audience, publishers "took the woke out and sent us normal math books."

DeSantis also highlighted his recent work to overhaul civics education in Florida — efforts that gained national attention in June after attendees of a teacher training reported that the lessons struck them as "Christian fundamentalist" and revisionist history — as well as the state's Parents' Bill of Rights, passed in 2021.

In a subsequent panel on parents' rights, M4L leader Tiffany Justice said the network intended to introduce similar "bills of rights" in every state, while her fellow panelist, attorney and M4L board member Jeff Childers, compared the bill to an AK-47 that would require additional accessories — that is, amendments to the law — in order to meet the "crypto-Marxist legal warfare" that he said opponents of parents' rights engage in.

"Our adversaries," added Childers, "it's not just that they don't care about our children. I believe they're actively trying to harm our children."

Later on Friday, James Lindsay, an anti-CRT activist and podcaster with a track record of making bizarre accusations, drove that point home in a lengthy lecture about how "social emotional learning" is being used as a subtle form of "brainwashing" to transform children into "change agents" and social justice protesters, and ultimately, to usher in a "new world, with new values" as desired by globalist elites. Warning parents that there was a longstanding communist plot to estrange children from their parents by making "your kid a little sexual weirdo," Lindsay argued that, "Under social emotional learning," parents of public school students "are sending your children to a thought reform program" akin to those in Mao Zedong's China during the Cultural Revolution.

There were other examples of right-wing education narratives. In one strategy session closed to the press, American Enterprise Institute fellow Max Eden, who co-authored a book arguing that Obama-era efforts to reduce racial disparities in school discipline had enabled the 2018 Parkland school massacre, spoke alongside Ryan Petty, a Florida Board of Education member and father of a daughter killed during that shooting. Other closed-door strategy sessions covered topics like "gender ideology" and "school choice."

But most of the strategy sessions — all hosted by the Leadership Institute, which for more than 40 years has run trainings for conservative activists and claims to have helped launch the careers of numerous current members of Congress — focused on brass-tacks topics: messaging and comms, website and database maintenance, strategic research, candidate vetting and one session titled simply, "Are you ready to run?"

While M4L itself has issued a sweeping number of school board candidate endorsements nationwide — including several dozen in Florida alone — its members have also started drawing endorsements from figures like DeSantis, who estimates that he's endorsed 20 to 25 candidates so far. In his speech, DeSantis singled out one such candidate at the summit, and suggested he may endorse more.

"We've done a lot of good stuff, but the state is not going to be able to do all this stuff on its own," said DeSantis. "It's really the local communities that need to be leading the way when it comes to their school districts." To that end, he continued, "I have this year made an effort to help promising candidates for school boards across the state of Florida." That, he suggested, might help address the fact that under the state constitution school board races must be nonpartisan, which DeSantis claimed had resulted in situations where reliably Republican districts have wound up with "left-of-center school boards."

In the meantime, DeSantis said, "What we're looking to do is really help candidates who are walking the walk, who have strong values, who are going to be there for parents and put the students first and just shine a little light on that and just help particularly some of our voters who come up to me and ask me these questions."

On Saturday, Sen. Rick Scott, who preceded DeSantis as governor before moving on to Washington, also spoke to the ways conference attendees could help the broader conservative agenda. While state and national candidates have typically been understood as bringing down-ticket campaigns along, Scott suggested that the reverse could prove true, now that education issues have become such polarized ground.

on the education wars