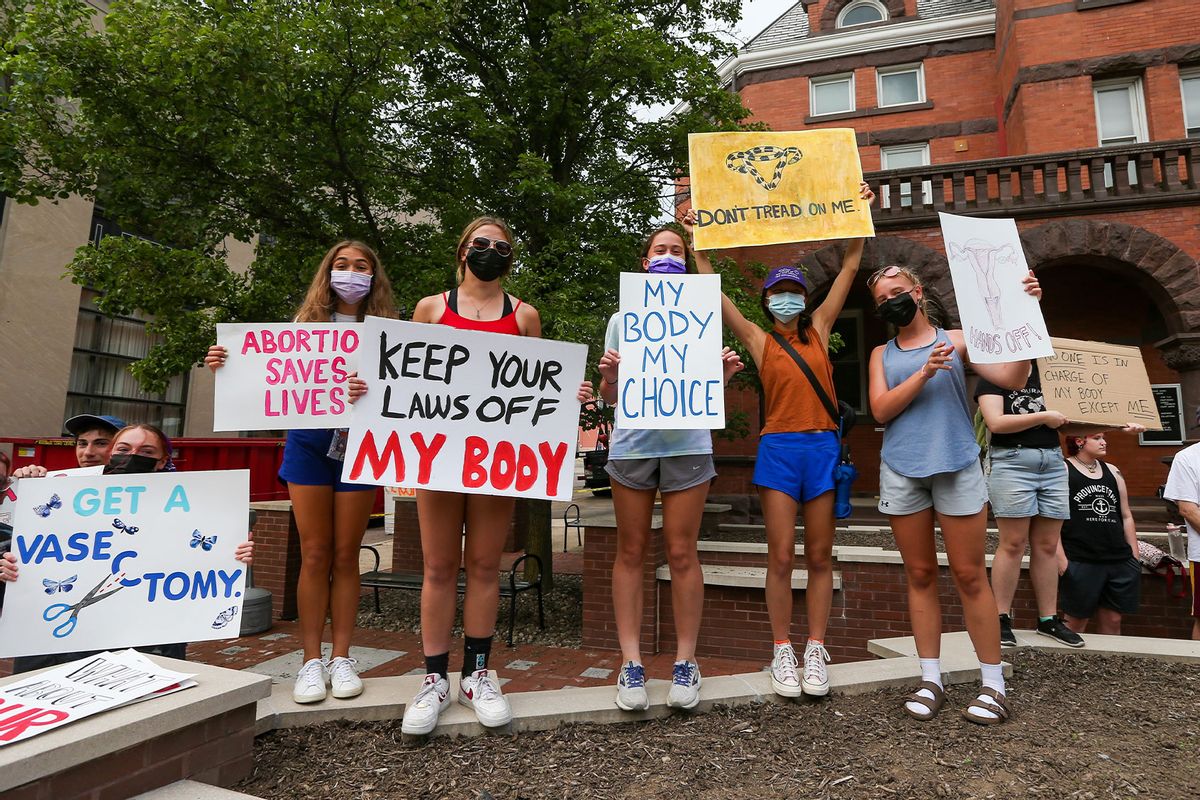 Abortion-rights protesters hold placards during a rally at the Columbia County courthouse. About 100 people attended the rally, which was organized in response to a leaked draft of a Supreme Court decision that would end federal protection of abortion rights in the United States. (Paul Weaver/SOPA Images/LightRocket via Getty Images)
--

Critics on Friday took aim at a proposed South Carolina law that would criminalize the online sharing of information about obtaining abortions and, according to some journalists, could even be used to silence stories related to reproductive rights.

S.B. 1373—which one prominent defense attorney called "a breathtaking assault on free speech"—contains language associated with organized crime conspiracy laws by targeting people who engage in "a pattern of prohibited abortion activity."

"This is tremendously concerning for us. It is a target for folks who tell the stories of patients who need to access care, explain how care is [accessed], and the stories of providers and advocates who are helping make sure that happens," Jessica Mason Pieklo, senior vice president and executive editor at the reproductive rights site Rewire News Group, told Prism.

"If we think that conservatives will stop at speech that targets abortion providers, people who write about abortion, people who offer scientific and medical information around abortion, we're mistaken," Pieklo added. "We know that this will bleed into other areas that evangelical and social conservatives deem inappropriate and deviant."

According to S.B. 1373—parts of which are nearly identical to NRLC model law—"aiding or abetting" includes:

S.B. 1373 also contains novel "whistleblower" protections, imposing prison terms of up to 10 years for people who "take any action to impede" those who report violations of the law to the state attorney general.

The National Law Review said the bill "also provides an extremely broad definition of what constitutes 'actions impeding a whistleblower.'"

Michele Goodwin, director of the Center for Biotechnology and Global Health Policy at the University of California, Irvine Law School, called S.B. 1373 "unconstitutional," but warned such bills would nevertheless likely proliferate.

"These are not going to be one-offs," Goodwin told The Washington Post. "These are going to be laws that spread like wildfire through states that have shown hostility to abortion."

Digital rights campaigners highlighted the role—and responsibility—of Big Tech in light of bills like S.B. 1373, with New Jersey congressional candidate and attorney Stephanie Schmid asserting that "it's time for tech companies to get off the sidelines."

The Center for Democracy & Technology says that "crucially, companies should carefully scrutinize and seek to limit the scope of surveillance demands issued in prosecutions to enforce anti-abortion laws."

"They should adopt clear and consistent standards for refusing overbroad requests, commit to giving their users timely notice of requests, and report publicly the numbers of surveillance demands they receive to increase public accountability," the advocacy group added.

In a bid to counter legislation like S.B. 1373, congressional Democrats last month introduced a bill, the My Body, My Data Act, that would establish privacy protections for reproductive health data.

Earlier this month, a coalition of reproductive rights groups filed a lawsuit in state court challenging the legislation, which Center for Reproductive Rights president and CEO Nancy Northup said is causing "mayhem at an unimaginable scale."

As of last month, abortion is banned in South Carolina after six weeks of pregnancy, except in cases of rape or incest, or when the pregnant person's life is in danger.