The congressional staffers said that Sen. Chuck Schumer was not doing enough to address the growing climate crisis 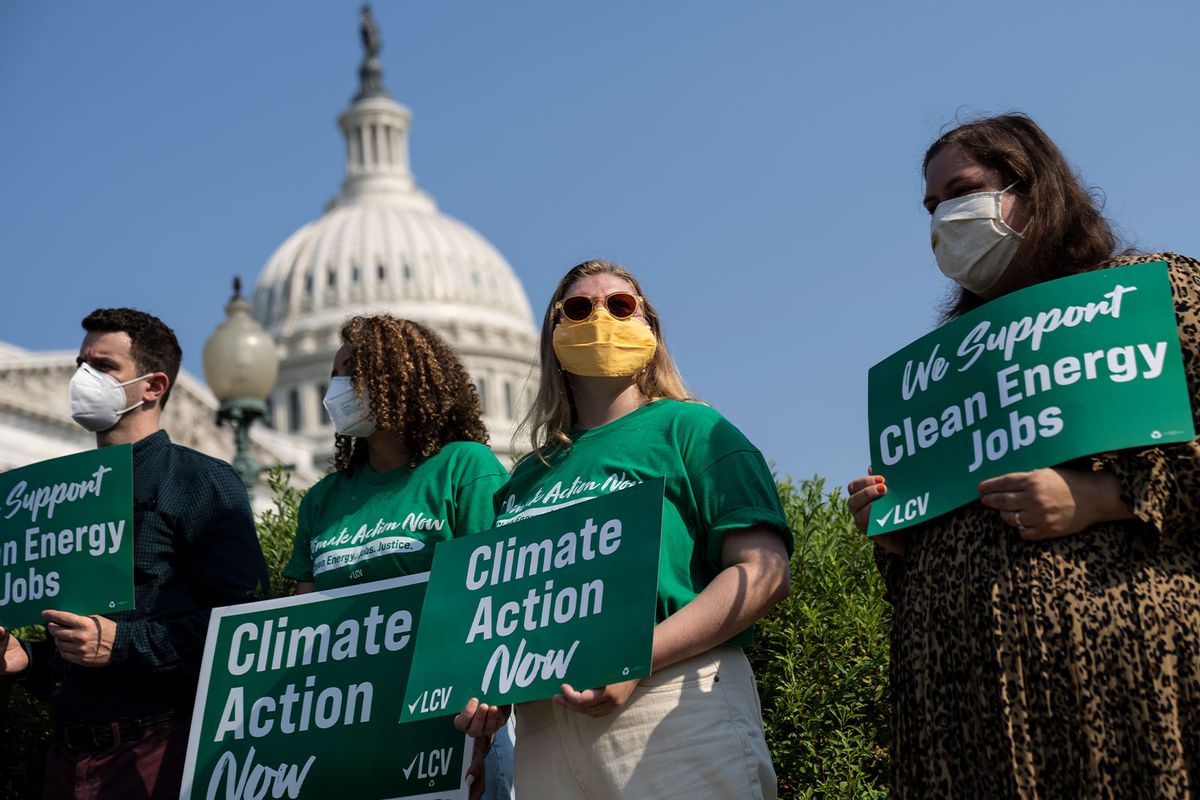 Activists look on as Senate Majority Leader Chuck Schumer (D-NY) speaks during a news conference about climate change outside the U.S. Capitol on July 28, 2021 in Washington, DC. (Drew Angerer/Getty Images)
--

Six congressional staffers were arrested on Monday after a group of more than a dozen Democratic staffers organized a climate demonstration at the office of Sen. Chuck Schumer, D-N.Y., who they argued has not done enough to address the impact of global warming.

At least seventeen Hill staffers hoisted signs that read "Climate Action Now, Chuck" and "Our Farms Are Flooding" while singing the song "Solidarity Forever" by Utah Phillips. Numerous aides also publicized the sit-in over Twitter. Among them were Aria Kovalovich, a staffer on the House Oversight and Reform Subcommittee on Environment, and Saul Levin, an adviser to Rep. Cori Bush, D-Mo.

This week, 165 Hill employees signed onto an open letter demanding that President Biden and Schumer "take ambitious, assertive action before the end of July to address the climate crisis."

"Every day that you do not act, the climate crisis spirals further out of control... In the coming days you must execute a multi-pronged approach at the executive and legislative levels to secure our future and cement your legacy," the letter read. "First, it is imperative that you immediately declare a climate emergency and end fossil fuel extraction on federal lands. Then, and most importantly, you must intervene in stalled Senate negotiations."

RELATED: Human garbage is a plentiful but dangerous source of food for polar bears finding it harder to hunt

Staffers received public support from House Democrats like Reps. Ilhan Omar of Minnesota and Ro Khanna of California, both of whom saw staffers arrested on Monday, according to Axios.

The demonstration comes after climate negotiations between top Democrats and Sen. Joe Manchin, D-W.Va., a conservative Democrat notorious for torpedoing much of Biden's agenda, fell through. Manchin, who has made a personal fortune off of the coal investments, specifically said he could not support more spending on clean energy with inflation at 9.1%.

The move outraged both progressives, with global warming at the top of many Americans' minds amid the sweltering heat wave that is tearing across much of the South and Northeast.

President Biden has vowed to take decisive action on climate change despite Manchin's latest blow to his agenda, saying that "the opportunity to create jobs and build a clean energy future is too important to relent."

Many Democrats in Congress have urged Biden to declare a national emergency in response to the rising temperatures across the globe. The move would allow the president to ratchet up clean energy manufacturing and roll out more weatherized infrastructure.

RELATED: Joe Manchin has made $5.2M from his coal company — and gets big donations from fossil-fuel industry