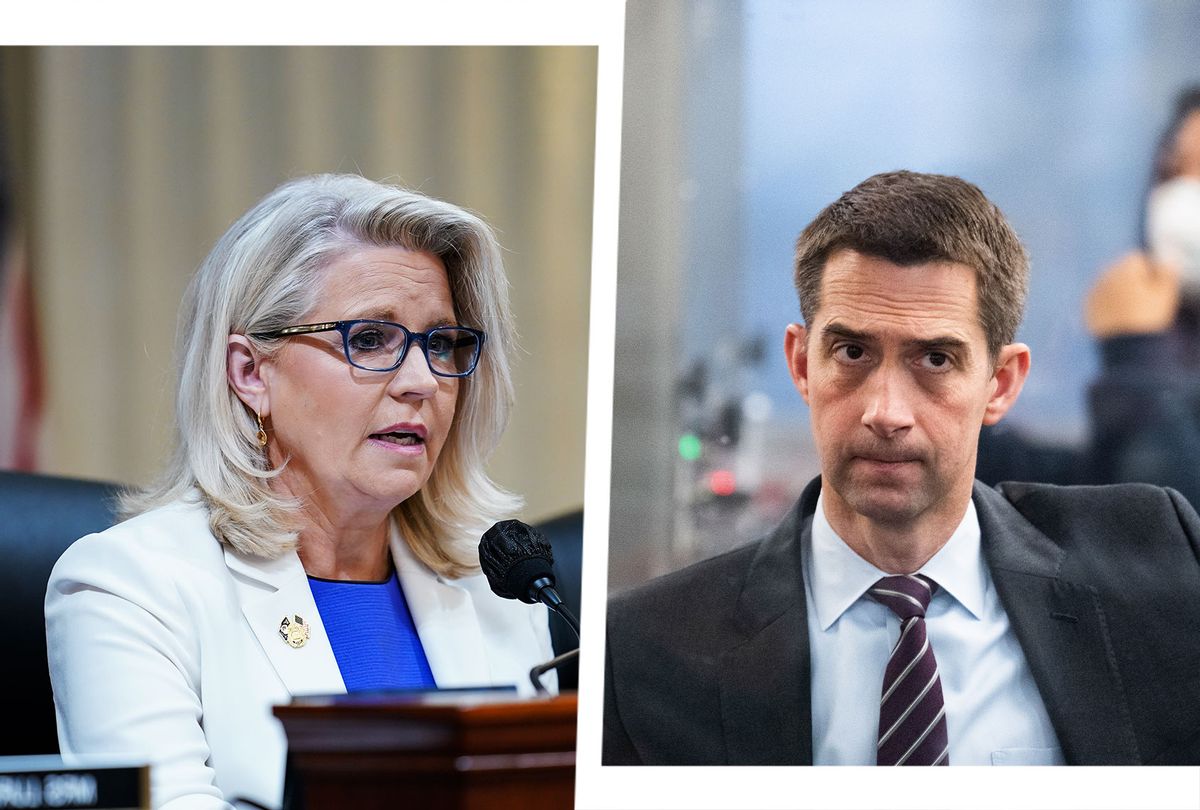 Rep. Liz Cheney, R-Wyo., tore into Sen. Tom Cotton, R-Ark., on Monday for criticizing the January 6 hearings, even though he apparently hasn't watched any of them.

"Hey @SenTomCotton - heard you on @hughhewitt criticizing the Jan 6 hearings," she tweeted. "Then you said the strangest thing; you admitted you hadn't watched any of them."

Cheney's remarks came after Cotton made an interview appearance with conservative radio talk show host Hugh Hewitt, where he claimed that the panel's failure to cross-examine witnesses does not align with traditional "Anglo-American jurisprudence."

"I think what you've seen over the last few weeks is why Anglo-American jurisprudence going back centuries has found that adversarial inquiry, cross-examination is the best way to get at the truth," Cotton said.

"There is no one on that committee who takes a view different from Nancy Pelosi, or even a view that's like, we should examine the full context of all of these statements, of all of these recordings, of all of this video," the Arkansas senator added.

Later during the interview, Cotton openly admitted that he hadn't watched any of the hearings.

"I did not watch that hearing, and I have not watched any of the hearings, so I've not seen any of them out of the context that I see a snippet here or there on the news."

Cotton's remarks echo past GOP claims that the hearings have been overly one-sided, since most of the committee is comprised of Democrats, with the exception of Cheney and Rep. Adam Kinzinger, R-Ill.

During the panel's formation, Democrats sought to create a bipartisan committee in order to avoid accusations of partisan bias. However, when House Minority Leader Kevin McCarthy, R-Calif., nominated to Reps. Jim Jordan, R-Ohio, and Jim Banks, R-Ind., to be on the panel, House Speaker Nancy Pelosi, D-Calif., rejected them, citing the fact that both men sought to overturn the 2020 presidential election in Donald Trump's favor.

RELATED: How did the Secret Service lose its Jan. 6 texts? So far, the explanations won't wash

Since then, Republicans have widely accused the panel of operating akin to a kangaroo court, eschewing traditional legal procedures. Some conservatives in Congress have even vowed to investigate the committee's activity if they regain control of the chamber in 2022.