Biden's numbers with young voters are in the tank, but passing a climate bill might be the thing to save Democrats 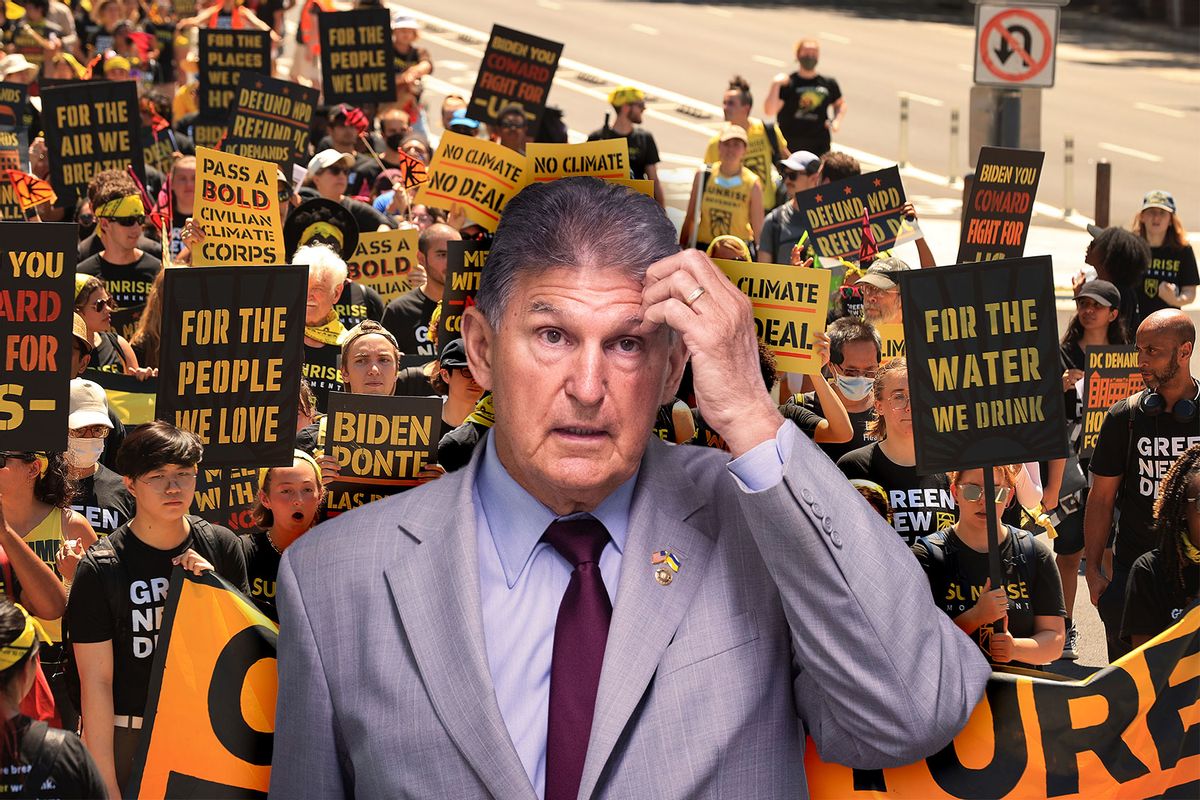 Long after most Democratic voters and the Beltway press had given up any hope that Senate Democrats would pass any meaningful budget legislation, Sen. Joe Manchin, D-W.Va., suddenly announced that he had struck a deal with Senate Majority Leader Chuck Schumer. The bill, called the Inflation Reduction Act of 2022, falls short of the ambitions laid out in last year's Build Back Better Bill, but is nonetheless surprisingly progressive when it comes to climate change.

"The $369 billion climate and tax package forged in a surprise deal by Senate Democrats on Wednesday would be the most ambitious action ever taken by the United States to try to stop the planet from catastrophically overheating," the New York Times reports. The number is especially surprising, as Democrats on Capitol Hill have been under intense criticism from progressives in recent weeks for paltry spending proposals on climate change, even as the planet endures another summer of record-setting heat.

The proposed climate spending is 160 times what was initially assumed, which would be a dramatic shift in priorities.

President Joe Biden said that the bill would "improve our energy security and tackle the climate crisis" while also fighting inflation.

However, optimism for the bill's passing is maximally cautious.

Manchin has repeatedly led Democratic leadership to feel that he's close to a vote on energy progress, only to yank the rug out at the last minute. Plus, there are concerns that other centrist Democrats, like Sen. Kyrsten Sinema of Arizona or Bob Menendez of New Jersey, will find some pretext to quash the entire bill. But both Biden and the Democrats facing midterm elections in 100 short days — including Sinema's fellow Democrat from Arizona, Sen. Mark Kelly — better hope that this bill passes and quickly. Because this is their best chance, this close to the election, of regaining some trust with the younger voters that polls show have been turning on Biden in droves over the past year.

If young people simply ignore the 2022 midterms, it will be all too easy for Republicans to win.

Polling overall has been devastating for Biden in recent months. His approval rating is in a steady decline and is at 38.4% right now, which is below even where Donald Trump's notoriously poor approval ratings generally sat. A new CNN poll shows that 75% of Democratic voters want someone other than Biden to be the nominee in 2024, which is up 11 points over a similar New York Times poll from earlier this month. This souring on Biden is largely being driven by younger voters. As the New York Times polls showed, 94% of Democrats under 30 want someone else as the nominee in 2024.

And it is important to remember that Biden owes his 2020 victory to young voters, who lean more to the left than older generations. While it's unlikely that many of them will switch to voting for Republicans in the midterms, the larger concern is that disillusionment with Biden and Democrats generally will drive down already paltry youth turnout. If young people simply ignore the 2022 midterms, it will be all too easy for Republicans to win large congressional majorities, as well as gain even more control over state and local government.

As Geoffrey Skelley at FiveThirtyEight reported Wednesday, while young voters largely cite inflation and the economy as their main frustrations, a deeper analysis suggests that there's just an overall sense that Biden can't get anything done on issues that matter to young people. "Harvard's spring 2022 poll of 18- to 29-year-olds found that 36 percent of the respondents who disapproved of Biden (56 percent overall) said 'ineffectiveness' best explained their disapproval," he writes.

As Christian Paz of Vox wrote earlier this year, young people are experiencing "a growing tide of disillusionment with electoral politics and dissatisfaction with the status quo."

Passing a major climate bill is one thing that would send a strong signal to young Americans that they haven't been forsaken and that Democrats are, in fact, trying to make progress on what is increasingly looking like a catastrophic future if things don't change

There's a number of issues driving this disenchantment, but it adds up to one larger narrative: Young people worry that older Americans, especially politicians, are too focused on their own comforts and power, and have abandoned their children and grandchildren. It doesn't help things that Democratic leadership is overall incredibly old, with Biden — who turns 80 in November — being the most prominent example.

The lack of action on climate isn't helping soothe young people's fears that their elders don't care about their futures.

With 100 days to go, Republicans are flatlining — yet somehow still poised to win

There's little Biden can do by himself to give young people hope right now. (Though forgiving student debt would help tremendously.) But passing a major climate bill is one thing that would send a strong signal to young Americans that they haven't been forsaken and that Democrats are, in fact, trying to make progress on what is increasingly looking like a catastrophic future if things don't change. It's not just the weather, either. The lack of progress on clean energy is contributing to overall inflation woes, because of how much our economic health is pegged to gas prices. That can't be fixed in the short term, but Democrats creating a path for Americas to pry themselves off of fossil fuel dependence would be a reason for optimism.

There's every reason to be worried this will fall through.

Manchin and Sinema are notorious for dangling out hope and then yanking it away at the last minute. Biden has been moving toward emergency executive actions on climate in recent days. There's always a danger this is a feint by Manchin to discourage those executive actions, and that he'll yank his support for this bill the second Biden agrees not to take those actions.

The bill text has been released and it weighs in at 725 pages. It's unlikely Manchin's team put that much work into a bill he isn't invested in voting for. There's also reporting suggesting that the secrecy around this bill was an effort to protect it from Republican sabotage. It's unlikely that Schumer and Manchin would go to such lengths if this bill was vaporware. However, there are also reasons for optimism.

If so, there's good reason for Democrats to anticipate that the midterms won't be the bloodbath that current polling suggests it will be. As multiple analysts have noted in recent days, Biden may disappoint Democratic voters, but Republicans are downright loathed. The January 6 committee hearings have been a reminder to the public of how complicit most of the GOP is with Trump and his attempts to gain power illegally. The overturn of Roe v. Wade is angering huge swaths of the public. Both are issues Republicans have trouble running away from.

People may turn out to vote not because they love Democrats, but because they fear Republicans gaining more power. Still, increasing turnout for Democrats depends on pushing back on the malaise spreading throughout their base, especially when it comes to younger voters. A big climate bill investing heavily in the future could be a good start when it comes to reigniting voter enthusiasm in November.