In honor of "Gone Girl’s" 10th anniversary, here’s what you should know about the influential novel 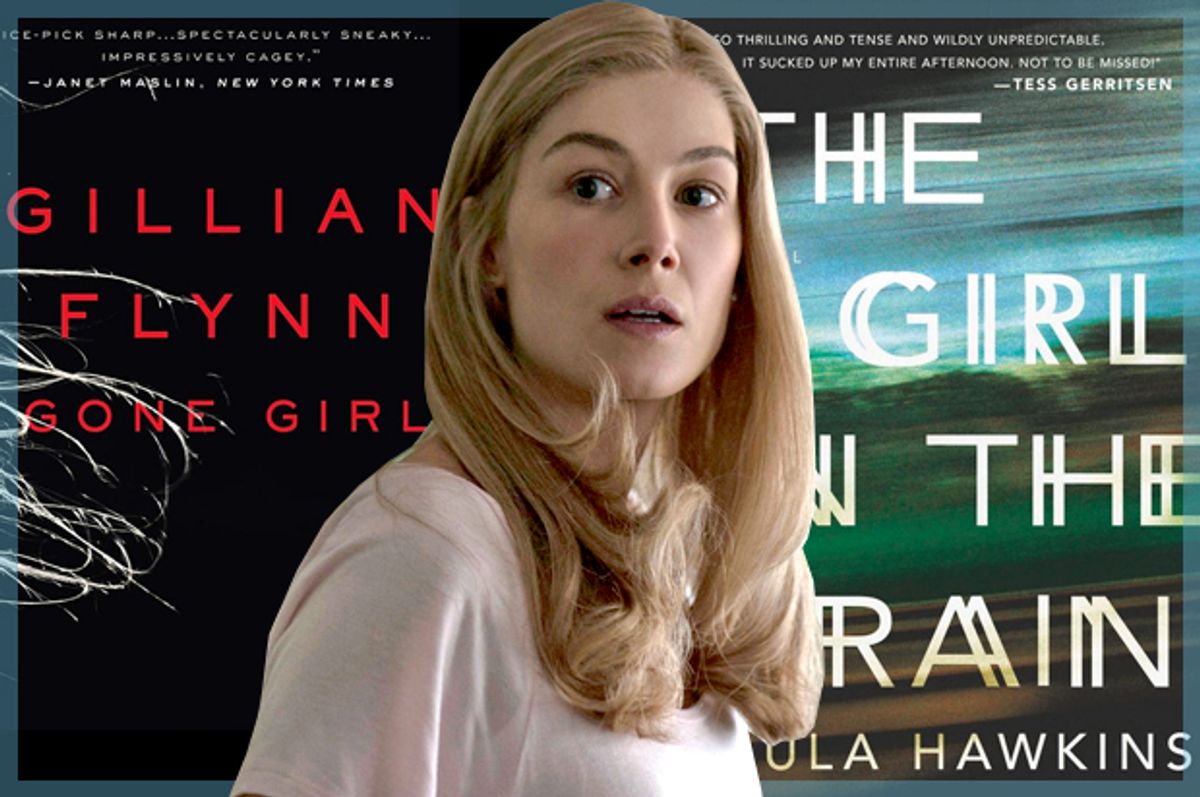 Gillian Flynn's "Gone Girl" became a bona fide literary phenomenon when it was published in 2012: It spent 37 weeks at no. 1 on The New York Times bestseller list, was adapted into a hit film starring Ben Affleck and Rosamund Pike in 2014, and has sold more than 15 million copies globally. The novel tells the story of Amy Dunne, who goes missing under mysterious circumstances on her fifth wedding anniversary; her husband, Nick, becomes the prime suspect in her disappearance. The book switches between Nick's narration and Amy's diary entries, making the reader unsure about who to trust. In honor of "Gone Girl's" 10th anniversary this month, here's what you should know about the novel.

1. "Gone Girl" is credited with starting the trend of crime novels with the word "girl" in their titles.

While it's hardly the first book to use the word as part of its moniker, according to Crime Reads, "Gone Girl" sparked the current wave of girl-titled books: Since its debut, we've gotten "The Girls" (2016) by Emma Cline, "The Girl on the Train" (2015) by Paula Hawkins, and "Girl Last Seen" (2017) by Nina Laurin, among (many) others.

2. It's also credited with a surge in books with female antiheroes and villains as protagonists.

In an interview with The Hollywood Reporter about the impact of the novel, Flynn talked about how difficult it was to get her first book, "Sharp Objects," published because of the belief that men don't want to read a book with a woman as its main character — and that women want to read books with characters that they can "root for." It was a take Flynn didn't agree with, and the reaction to "Gone Girl" proved she was right: "My favorite thing about 'Gone Girl' is that it absolutely blew the doors off that old-fashioned, completely antiquated theory that was probably never there to begin with: That there's no appetite," she said.

Following the success of the novel and its film adaptation, unreliable antiheroines began popping up frequently in fiction — a trend that has been called "The 'Gone Girl' Effect."

3. "Gone Girl" wasn't based on a true story or any one real-life case.

True crime fanatics might recognize some similarities between "Gone Girl" and the very real disappearance and murder of Laci Peterson. Among other things, Laci was pregnant at the time of her 2002 disappearance, as Amy was thought to be; Laci's husband, Scott — who, like Nick, was in the midst of an affair — eventually came under suspicion for his wife's murder and was convicted in 2003.

Flynn, a self-described "true-crime addict," told Entertainment Weekly that she didn't base her story on a particular case. "One could point to Scott and Laci Peterson — they were certainly a good-looking couple," she said. "But they're always good-looking couples. That's why they end up on TV . . . It could be any number of those types of cases, but that was what kind of interested me: the selection and the packaging of a tragedy." In an interview with the Sacramento Bee, she acknowledged that Nick "has got that [Scott Peterson] vibe," but added that the character "is certainly not Scott Peterson specifically . . . the idea [is] that we are consumers of tragedy now, that we cast our heroes and our villains and we become very invested in them. And certainly Scott Peterson was one of those cases."

4. One of Flynn's influences was a children's book.

Flynn has been open about her many inspirations for "Gone Girl," among them novels like "Rosemary's Baby" and "Notes on a Scandal" — which Flynn said have "endings of unease" — and the play "Who's Afraid of Virginia Woolf."  ("I have several little inside jokes, character names, names of the town — little, little references to "Who's Afraid of Virginia Woolf" that no one was supposed to get," Flynn told EW.)

But perhaps the biggest influence was Ellen Raskin's 1978 young adult novel, "The Westing Game," about a group of people who are named as heirs of reclusive millionaire Samuel W. Westing. In order to inherit his millions — and control of his company — they must participate in a game. Like "Gone Girl," the novel is filled with surprising turns and features a character adept at games and riddles. "The Westing Game" won the Newbury Medal for excellence in children's literature in 1979.

5. Flynn's own career provided some of the basis for Nick.

Like Nick, Flynn lived in New York and wrote about pop culture for a magazine (she was a writer for Entertainment Weekly for 10 years). Also like Nick, she moved back to the Midwest and was laid off from her job during the Great Recession. There's a key difference here, though — Flynn relocated to Illinois before losing her job, while Nick relocates to Missouri after he's laid off.

6. Amy's "cool girl" monologue owes a debt to "There's Something About Mary."

In arguably the most famous part of "Gone Girl," Amy unleashes a monologue about how she played the part of the "cool girl" for Nick, which she describes as the type of woman who loudly and enthusiastically enjoys stereotypically "male" things like playing video games and football, eats tons of junk food and drinks beer while maintaining a perfect figure, and never shows negative emotions.

Flynn told Vulture that she noticed the archetype while watching "There's Something About Mary" when she was in her twenties: "There's Cameron Diaz, who looks like Cameron Diaz, but she's also a doctor, and she also loooves hamburgers, and she starts out playing golf in the morning, and all she wants from a man is a guy who wants to take her to a football game, and she wants to eat hot dogs and drink real beer. Real beer!" Flynn said. "And I thought, 'Wow, that's a cool girl!' And then I thought, 'Oh, right. She's been invented by guys.'"

As for the monologue itself, Flynn penned it as part of a writing exercise "when I was like in fugue state, all in one afternoon." She initially didn't plan to put it in the book, "but I just liked it so much, and it did feel like it came from Amy . . . And I'm so glad I did because that's the one thing I hear about all the time from people."

7. Flynn wrote "Gone Girl" by going back and forth between the two narratives.

Instead of writing part of the book from one perspective first and then the rest of the book from the other, Flynn regularly switched between Nick and Amy's perspectives as she wrote. "I have enough trouble keeping my thoughts organized without adding any extra challenges! So I tend to write in order," she told Chatelaine. "And, truth be told, it was probably healthier for me, mentally, to switch back and forth than to stay in Amy's or Nick's head for too long a time."

8. "Gone Girl" has been accused of being misogynistic.

Since its publication, "Gone Girl" has been hotly debated. Its conflicting male and female perspectives, which come from two extremely flawed characters, make its gender politics an obvious topic, with some claiming that the portrayal of Amy is misogynistic. Flynn, who is a feminist, has loudly disagreed with that notion. "I've certainly been called a misogynist, and that to me is strange," the author told TIME. "It feels so old-fashioned to think because you write about awful women that you don't like women. To me it's worse to only write about good women. I'm tired of women as the supporting character, women as the helpmate, women as the adorably flawed heroine – she can be front and center, but only if she falls down a lot and has trouble with men."

9. According to Flynn, "Gone Girl" is about how marriage is a "long con."

Fynn's first two novels, "Sharp Objects" and "Dark Places," featured extremely isolated protagonists; for "Gone Girl," her third novel, Flynn told Publishers Weekly that she wanted to explore how marriage is capable of bringing out both the best and worst in people. "In its way marriage is sort of like a long con, because you put on display your very best self during courtship, yet at the same time the person you marry is supposed to love you warts and all," she said. "But your spouse never sees those warts really until you get deeper into the marriage and let yourself unwind a bit."

10. While writing "Gone Girl," Flynn got herself pumped up to work by listening to Eminem.

According to Flynn, when she's writing, she usually finds herself obsessing over a particular song. With "Gone Girl" it was "Lose Yourself," the Oscar-winning hip hop classic Eminem wrote for the film "8 Mile."

11. Gone Girl contains a reference to a real-life detective.

When Amy meets her former boyfriend in a casino, she becomes unnerved when she notices a stranger staring at her. He approaches her and asks if she's "any relation to the Enloe family." It's a nod to Detective Craig Enloe of the Overland Park Police Department, whom Flynn thanked in her acknowledgments for replying to her "42,000 emails . . . with patience, good humor, and exactly the right amount of information."

Anastasia Rose Hyden is a writer and trivia buff. Her hobbies include reading, running, petting kitties, and trying to solve cold cases.