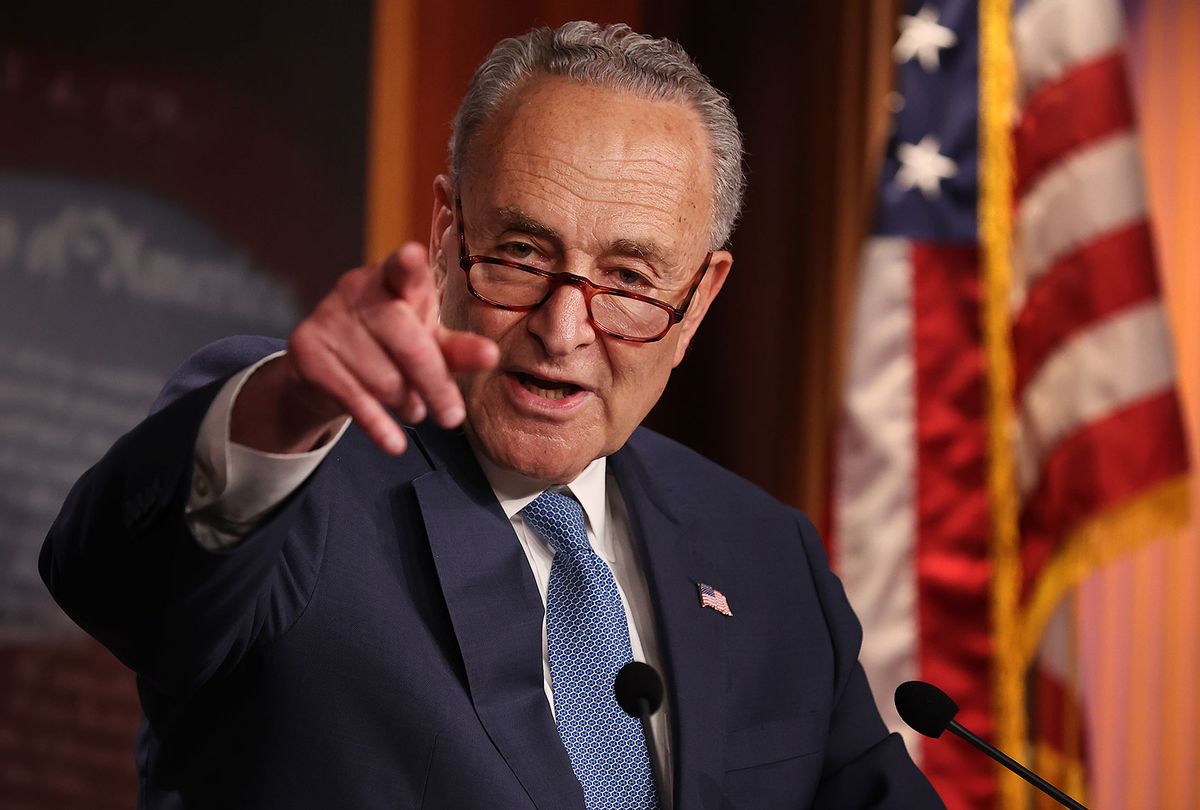 It's been a dangerously hot, rainy, fiery summer in the United States. But there's a glimmer of hope on the horizon: Congress is on the verge of finally taking action to address some of the greenhouse gas emissions that are fueling the climate crisis.

This week, after months of negotiations and false starts, Senate Democrats made a deal on a bill called the Inflation Reduction Act of 2022.

If it passes, the bill would invest $369 billion in American energy security and fighting climate change — the single largest infusion of federal cash aimed at tackling the climate threat in U.S. history. According to Senate Majority Leader Chuck Schumer's office, the bill would reduce domestic emissions approximately 40 percent below 2005 levels by 2030, an estimate that has been tentatively verified by independent experts.

This week's deal is much smaller than the $2 trillion climate plan President Joe Biden initially envisioned. But it's also a far bigger investment than Democrats thought they would get as recently as earlier this month.

The legislation, which is currently in draft form and could be brought before the Senate next week, aims to combat rising inflation, reduce the federal deficit, limit the cost of prescription drugs and healthcare premiums, and tax major corporations and very wealthy Americans, in addition to its provisions on energy and climate. Senator Joe Manchin, a conservative Democrat from West Virginia with financial ties to the coal industry, conditioned his support for the bill on a promise from Democratic leadership that it will take up separate legislation in the fall that would seek to modernize and speed up the permitting process for new infrastructure projects. That could include both renewable energy infrastructure and fossil fuel infrastructure like pipelines.

When it comes to parsing the climate-related content in the Inflation Reduction Act, the key thing to keep in mind is that the $369 billion set aside in the draft text will be split between two priorities that are often in tension with each other: boosting domestic energy production and reducing greenhouse gas emissions. The former would result in near-term expansions of fossil fuel extraction, like new oil and gas leases. But the longer-term climate payout could be monumental.

In some cases, the bill directly uses fossil fuel extraction as a bargaining chip for clean energy. It requires the Department of Interior put millions of acres of public lands and waters up for oil and gas leasing before the agency can grant access or sell leases to renewable energy projects. But while boosting oil and gas drilling, the bill also creates a new program that incentivizes oil and gas producers to reduce their methane emissions. And it contains a bounty of new funding for clean energy, mostly in the form of tax credits for businesses and individuals that would substantially reduce the nation's reliance on dirty fuels.

The bill would make electric vehicles more accessible to the average American by offering $7,500 rebates for new EVs and $4,000 for used vehicles. (However, place-of-origin requirements for the minerals to build those new vehicles could become a roadblock.) It would encourage homeowners to get off natural gas by offering up to $14,000 to install electric heating and cooling systems, water heaters, and stoves, and to make other home efficiency improvements. There's also money for states to create programs to train contractors to do this work, which involves newer technologies that many contractors aren't familiar with.

The bill invests in almost every kind of clean electricity generation imaginable, and offers grants and loans to speed up the development of new transmission lines to carry that clean power to customers. Existing tax credits for wind and solar would be extended and made more accessible to tribes, municipal utilities, and rural cooperatives. These energy projects would get more money for meeting wage minimums or for siting projects in "energy communities" — in other words, creating clean jobs in areas that have long been hubs for fossil fuel work.

There's also a whole slew of new tax credits that will help other forms of clean energy get off the ground and onto the grid, like batteries that can store and dispatch renewable energy, and geothermal energy, which uses heat from under the Earth's surface to generate power. Old nuclear plants that supply crucial clean energy to the grid but are expensive to operate will also get a boost from new tax credits that could keep them online.

Some of the new incentives, like an increase in the tax credit for carbon capture and storage, are controversial. If the bill passes, projects will earn up to $85 for each ton of carbon they capture and store underground, whether the CO2 is captured from a power plant or from some other emitting source. The legislation offers an even bigger bump, up to $180 per ton, for projects that suck carbon dioxide directly out of the atmosphere. Many climate advocates are skeptical that these solutions will ever be effective or economical, and are concerned that they will have negative impacts on surrounding communities. But some experts say that they are some of the best options on the table to clean up certain industries like cement and chemical manufacturing. The bill also contains a new tax credit for producing cleaner forms of hydrogen, a fuel that produces no greenhouse gas emissions when burned and that could also help cut emissions from those industries.

If the act passes, it will help create a lot of jobs making photovoltaic panels, wind turbines, and batteries, and processing the critical minerals behind these technologies. It offers billions of dollars in tax credits for domestic manufacturing of those materials. It will also help make sure that electric vehicles are manufactured in the U.S., with $2 billion to retrofit car manufacturing facilities to get them ready to make clean vehicles.

Wins and losses for environmental justice

The bill would also cut the pollution that disproportionately impacts predominantly Black and brown, low-income communities, with $60 billion in environmental justice initiatives. Frontline neighborhoods would receive $3 billion in block grants for community-led programs to reduce air pollution, to tackle the urban heat island effect and keep people safe during extreme heat, and to hold workshops and advisory group meetings to involve residents in decisions.

An $8 billion chunk of the funding for projects that reduce greenhouse gas emissions is also earmarked for disadvantaged communities. If that funding goes to things like green schools or community solar, "that could be really exciting, dynamic, and transformative," said Daniel Aldana Cohen, a sociology professor at the University of California, Berkeley and co-director of the Climate and Community Project.

Other provisions will benefit environmental justice communities, too. For example, there's $3 billion for electrifying port infrastructure, which will improve air quality for nearby neighborhoods. There are tax credits for electric trucks, which should encourage the industry to shift away from diesel-powered 18-wheelers that emit noxious fumes in communities along highways and near warehouses.

One area where critics see a missed opportunity to address environmental injustice is housing. The tax credits that encourage households to make energy-efficiency upgrades, switch to electric appliances, and install solar panels will go only to homeowners, not renters.

The bill does provide $1 billion in grants to make affordable housing more energy efficient, but with more than 5 million federally-assisted housing units across the country, that averages out to less than $200 for each unit. "In an eviction crisis, a utility debt crisis, a heat island crisis, you really need to move substantial amounts of money into the low-income housing sector," said Cohen.

What experts are saying

Overall, climate groups were enthusiastic about the deal, but a few blasted Democratic leadership for not doing enough to limit greenhouse gas emissions.

But the overarching message from most experts has been that this deal is a positive step forward for the U.S. "These kinds of investments do have a great track record of promoting clean energy technology development and deployment," Adam Orford, an environmental historian and a professor of law at the University of Georgia, told Grist. "There are a lot of reasonable, needed, rational energy policy interventions here."

There is no guarantee that the Inflation Reduction Act of 2022 will become law. Manchin, the senator from West Virginia, was one of two Democratic holdouts during the months-long intra-party negotiations leading up to the announcement this week. He worked with Schumer to craft the act, but he has backed out of deals before, and there's still a chance he could change his mind. It's less clear what Manchin's colleague, Kyrsten Sinema from Arizona, thinks about the deal. She has not signaled whether she will support it or not. Her position on the legislation could slow or even tank the entire proposal. And experts are concerned that the permitting legislation Democrats promised to pass in a few months could make it easier for companies to get fossil fuel infrastructure approved more quickly. "The value of the total package will depend on what is proposed in the permitting law that was agreed to in order to get Manchin's support," Orford said, "but it's an overall positive."