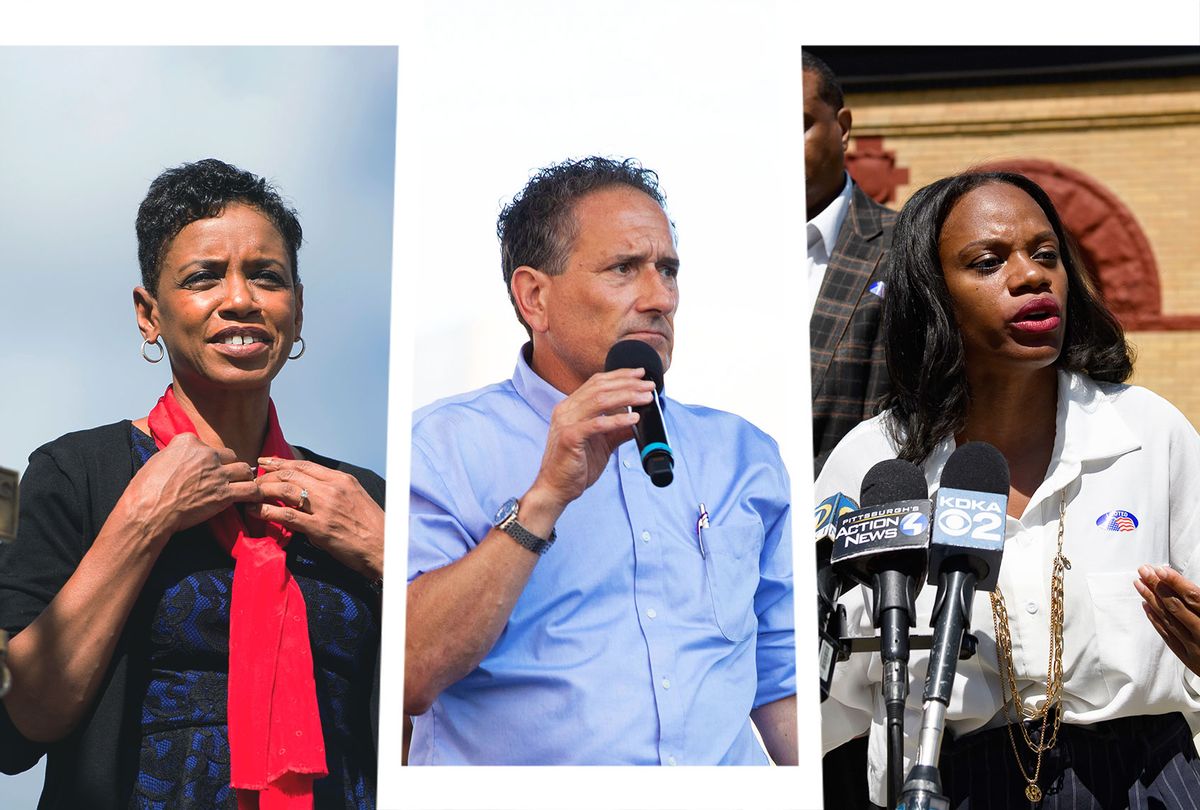 The United Democracy Project (UDP), an AIPAC-affiliated super PAC, has already spent $24.2 million on Democratic primaries this cycle, including millions that it raised from top Republican megadonors like Paul Singer and Bernard Marcus. The money has helped AIPAC-backed candidates wipe out progressives in primaries in Michigan, Maryland, North Carolina, Pennsylvania, Texas, California and Ohio.

UDP and other pro-Israel groups tied to AIPAC – Democratic Majority for Israel (DMFI), Urban Empowerment Action PAC and Pro-Israel America PAC — spent more than $10 million combined in three Michigan primaries, The Intercept reported, to defeat progressive candidates, including last week's loss for Rep. Andy Levin, D-Mich., who has been called the most progressive Jewish member of the House.

"I'm really Jewish," Levin, a former synagogue president, told MSNBC last week. "But AIPAC can't stand the idea that I am the clearest, strongest Jewish voice in Congress standing for a simple proposition: that there is no way to have a secure, democratic homeland for the Jewish people unless we achieve the political and human rights of the Palestinian people."

UDP spent more than $4 million on ads opposing Levin and backing his opponent, Rep. Haley Stevens, D-Mich., after they both opted to run in the state's 11th District following redistricting. Stevens on Tuesday defeated Levin, 60-40.

It's unclear how much impact spending by the Israel lobby, or other groups like Emily's List, which also backed Stevens, had on the actual race. The Atlantic's Yair Rosenberg argued that UDP was merely backing the more electable candidate in Michigan and other races. But critics denounced the group for funneling Republican money into Democratic contests.

Levin after his defeat lamented that he was the "target of a largely Republican-funded campaign set on defeating the movement I represent."

Sen. Bernie Sanders, I-Vt., during a campaign rally with Levin last week, argued that AIPAC's involvement in the race had "nothing to do, in my view, with Israel."

"It is simply trying to defeat candidates and members of Congress who stand for working families and are prepared to demand that the wealthy and large corporations pay their fair share of taxes," he said, calling on Democratic leaders to ban super PAC money from its primaries.

An AIPAC-affiliated super PAC has already spent $24.2 million on Democratic primaries this cycle, including millions that it raised from top Republican megadonors like Paul Singer and Bernard Marcus.

UDP fired back at Sanders over his criticism.

"Bernie and his allies are struggling with the fact that the majority of progressive Democrats in the country are pro-Israel," Patrick Dorton, a spokesperson for UDP, told Salon. "They come up with attack after attack because they don't like the pro-Israel nature of the Democratic Party."

Dorton was quick to note that UDP has also received donations from Democrats, including megadonor Haim Saban.

"UDP is funded by Democratic and Republican donors who have set aside their partisan preferences in a hyperpolarized political environment to support a better U.S-Israel relationship," Dorton said.

He argued that it was "hypocritical" for Sanders to complain about pro-Israel spending because "all kinds of Bernie-allied groups are spending in these primaries," criticizing the "nasty attacks" from groups like J Street targeting Stevens in the primary.

J Street, a liberal Jewish group, called out AIPAC for endorsing and funding 109 Republicans who voted to overturn the election on January 6 while attacking candidates like Levin as "extremists."

"It is alarming that this race, like many other Democratic primaries this cycle, was heavily impacted by the aggressive outside spending of AIPAC and its super PAC, the United Democracy Project," the group said in a statement, calling on other Democratic candidates to "disavow and decline the support of AIPAC and its super PAC—which have come as a surprise to at least some of them."

AIPAC's official PAC pushed back on the criticism.

"We are proud to engage in the democratic process to help elect leaders who will strengthen the US-Israel relationship – including scores of progressive candidates," Marshall Wittmann, a spokesperson for AIPAC-PAC, said in a statement to Salon. "In fact, we have supported over half of the Congressional Black Caucus and Hispanic Caucus and nearly half of the Progressive Caucus.  It is completely consistent with progressive values to stand with the Jewish state.  We will continue to support progressive candidates who will stand with our democratic ally, Israel – and oppose detractors of the Jewish state."

AIPAC was less successful in campaigning to elect Michigan state Sen. Adam Hollier in the 13th District despite funneling more than $4 million into the race. State Rep. Shri Thanedar, who spent $5 million of his own money, ultimately prevailed in the race with just 28% of the vote, benefiting from a nine-candidate field. But the group has seen a strong return on its investment in other states.

All of the candidates targeted by the PACs have expressed support for Palestinian rights or have criticized the billions in aid the U.S. provides to the Israeli military. They have also supported prominent progressive proposals like Medicare for All, climate action and more left-wing economic policies. Despite spending heavily to influence Democratic primaries, UDP "has not been similarly active in Republican primaries, even in races where Republican candidates have been widely criticized for antisemitic comments," The American Prospect reported. But AIPAC has endorsed numerous controversial Republicans, including Rep. Jim Jordan, R-Ohio, and Rep. Scott Perry, R-Pa., who last year compared Democrats to Nazis.

AIPAC has funded ads lashing out at some far-right Republicans like Sen. Rand Paul, R-Ky., and Rep. Thomas Massie, R-Ky., pressuring them to support funding for Israel's Iron Dome defense system. AIPAC-PAC backed Rep. Young Kim, R-Calif., in her primary, though UDP has not been involved in any Republican primaries.

All of the candidates targeted by the PACs have expressed support for Palestinian rights or have criticized the billions in aid the U.S. provides to the Israeli military.

"We're looking at Republican races, we're looking at Democratic races," Dorton insisted. "Our goal is to build the largest bipartisan coalition in Congress. Unlike other groups, we don't feel like the way to do that is to support candidates that align themselves with the most persistent critics of Israel in the U.S."

Dorton said that UDP focuses on races "where there is a contrast between a pro-Israel candidate and a candidate who is an active detractor of Israel."

"We also take into account viability, demographics of the district and other factors that would impact an election, number of candidates, that kind of thing," he said. "So we are looking to help pro-Israel candidates win races."

This election cycle has marked a drastic change for AIPAC, which did not have a PAC or even endorse candidates until earlier this year. Former Clinton labor secretary Robert Reich cited the group's heavy expenditures to label them "the single most influential big money group in Democratic electoral politics."

Though UDP has argued that its funding is aimed at helping candidates who will be more friendly to Israel, some observers argue that it is just a pretense to defeat more progressive Democrats.

"Very often when these establishment pro-Israel organizations target a progressive candidate, those candidates are also targeted by groups that are not focused on Israel-Palestine but simply want to defeat that person because that person may be to progressive on questions of healthcare, or they may support the Green New Deal," Peter Beinart, a professor at the Newmark Graduate School of Journalism and editor-at-large at the conservative Jewish Currents, told Democracy Now. In some cases, he added, groups like the Democratic Majority for Israel "work out of the same offices with the same staff" as seemingly unrelated groups that target progressives on issues that have nothing to do with Israel.

Dorton argued that UDP is merely "exercising our First Amendment right to bring voters publicly available information," dismissing criticism that the ads aren't focused on Israel because, he said, "there was a clear contrast" that voters were already aware of.

J Street, which has far less money to spend than its deep-pocketed rivals at AIPAC, has sought to counter the group's influence by funding ads backing progressives in these races, including spots attacking Stevens in Michigan, though the group's PAC has only spent about one-tenth as much as UDP alone this cycle. J Street warned after the latest defeat that AIPAC's intervention, funded in part by Republican megadonors, threatens to harm the Democratic Party, foreign policy and "ultimately the state of Israel."

"There is increasing danger to the historical, bipartisan support for Israel in Congress because of politicians mostly on the left, but some on the far-right, but mostly on the far-left, who claim to be pro-Israel but aren't," he told Salon.

Though AIPAC's focus has been fairly limited on a couple of handfuls of races, the big money pouring into the races could have a chilling effect on other Democrats, J Street warned.

"With their overwhelming spending, AIPAC hopes to send an intimidating message to others: Cross our red lines, and you could be next," the group said in a statement. "While political space for open and healthy debate over US foreign policy has opened up considerably in recent years, they appear determined to close it down. Instead of building sustainable bipartisan support for Israel, AIPAC has harmfully turned Israel into one of the sharpest wedge issues in American politics."