After Garland's press conference — and reports that Trump may have taken nuclear documents — will the GOP shut up? 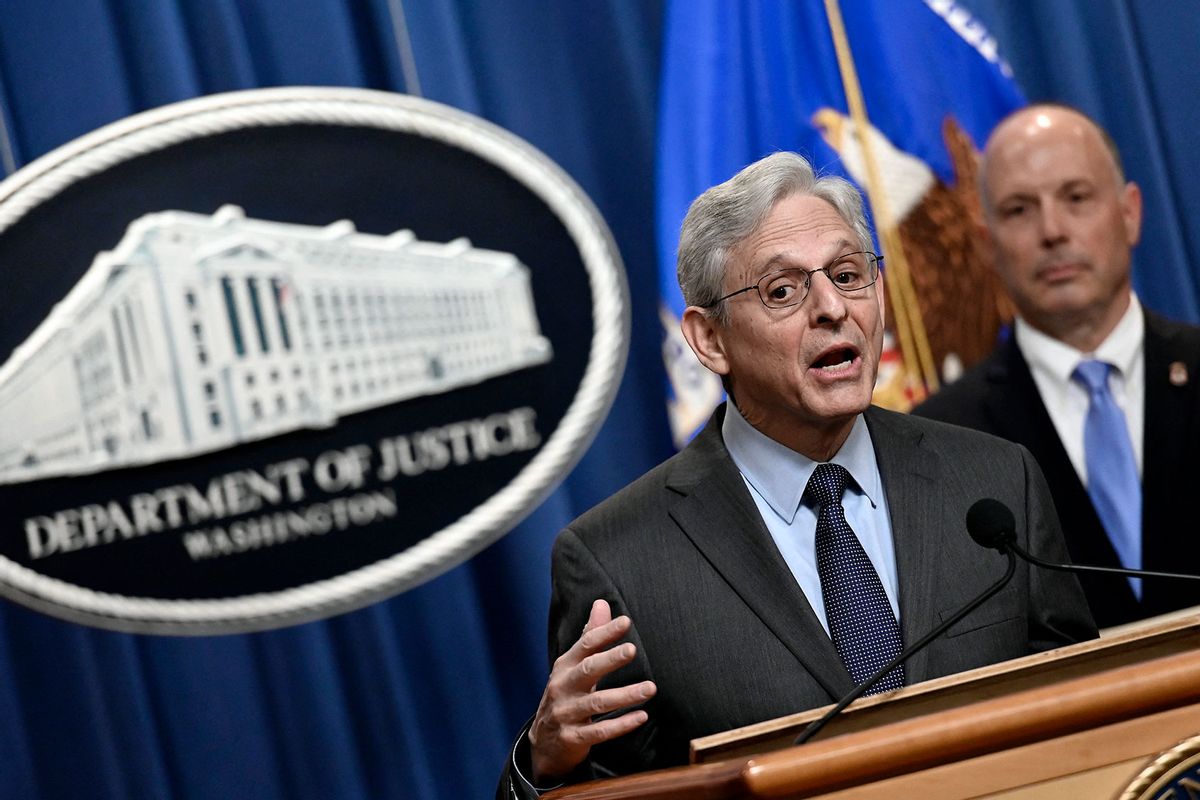 US Attorney General Merrick B. Garland speaks about a significant firearms trafficking enforcement action during a news conference at the Justice Department in Washington, DC, on April 1, 2022. (OLIVIER DOULIERY/AFP via Getty Images)
--

After Monday's FBI search of Donald Trump's home at Mar-a-Lago, Trump blasted out the news of the unprecedented intrusion on a former president's residence. He asserted that it was politically motivated.

But late on Thursday, the Washington Post reported that "sources familiar with the investigation" say that "classified documents relating to nuclear weapons" were among the materials the FBI search was seeking. The Post's sources did not say whether the agents found such materials.

One source, however, told the Post that among the 15 boxes of materials recovered from Mar-a-Lago in January was material that included "signal intelligence," that is, "intercepted electronic communications like emails and phone calls of foreign leaders."

The Post report surely caught Trump's allies off guard, after many had amplified his claims earlier this week. House Minority Leader Kevin McCarthy tweeted, for instance, that Garland should preserve all documents relating to the search and clear his calendar for hearings after the midterms if Republicans, as expected, take control of the House.

Sen. Marco Rubio described the warrant-based search as sponsored by "Marxists." After the Post story, it may be awkward watching him wipe that egg off his face.

Republicans had also mounted an unrelenting public pressure campaign to force Garland into a press conference justifying the search. On Thursday, Garland did exactly that, turning the tables on his attackers with the tactical skill and aplomb of Gen. George Patton.

At the same time, Garland was also eager to avoid becoming the next James Comey. As I observed in Salon on Thursday, Comey came under intense public criticism, and rightly so, for acting contrary to Justice Department norms about not revealing details about pending investigations of a candidate — Hillary Clinton, of course — during an election season.

The current attorney general rose masterfully to the challenge on Thursday. He established that the department had proceeded by the book. He recounted that, to get the warrant, the FBI's sworn affidavit had to establish to an independent federal magistrate judge's satisfaction that there was evidence of a crime and that the evidence would be found at Mar-a-Lago.

Even before Thursday evening's Post report, anyone paying attention understood that this was no ordinary search warrant. Intruding on the residence of a former president is no small matter. The magistrate judge authorizing the warrant would have applied the most rigorous review to ensure that there was solid evidence of a crime.

News reporting tells us that previous voluntary requests, followed by a grand jury subpoena, failed to produce the classified documents that the government believed had been improperly stored at Mar-a-Lago. So the DOJ took the next necessary step to protect national security.

At Garland's press conference, he also made clear that the Justice Department had no intention to disclose Monday's search or anything about it, until Trump revealed it himself.

Trump evidently had his own reasons, including a perceived fundraising opportunity, for making the search public and blaring out his grievance as a purported victim of government oppression. Predictably, his congressional allies and his political base rallied to him, which may well have energized his presidential campaign hopes for 2024.

Here is where Garland turned the tables on Trump and seized the high moral ground. Acknowledging the public statements made by a Trump representative about the search, Garland announced on Thursday that the Justice Department had moved in court to unseal the search warrant and allow it to be made public, making clear that he would not have done that but for Trump's public statements.

The attorney general was careful to say nothing more about the investigation than what the public already knew. The warrant and attached materials, should the court allow their release, will do the speaking for him.

Trump is now caught between a rock and a hard place. He is not likely to want the "inventory" of items that the FBI seized on Monday revealed or he would have done it himself; after all, the agents left a copy with his lawyer at Mar-a-Lago. On the other hand, opposing the motion to unseal the warrant and the inventory would add mightily to suspicion that he had indeed improperly kept state secrets and would prefer to keep that hidden.

He has until 3 p.m. on Friday to decide what stance to take in court.

In the meantime, the twice-impeached ex-president has chosen the safe and familiar course: distraction On his Social Truth media site, he posted: "Does anybody really believe that Joe Biden and the White House knew NOTHING about this great embarrassment to our Country?"

Perhaps the only surprise in all this was his failure to include another familiar meme: "But her emails!"

about the explosive Mar-a-Lago raid