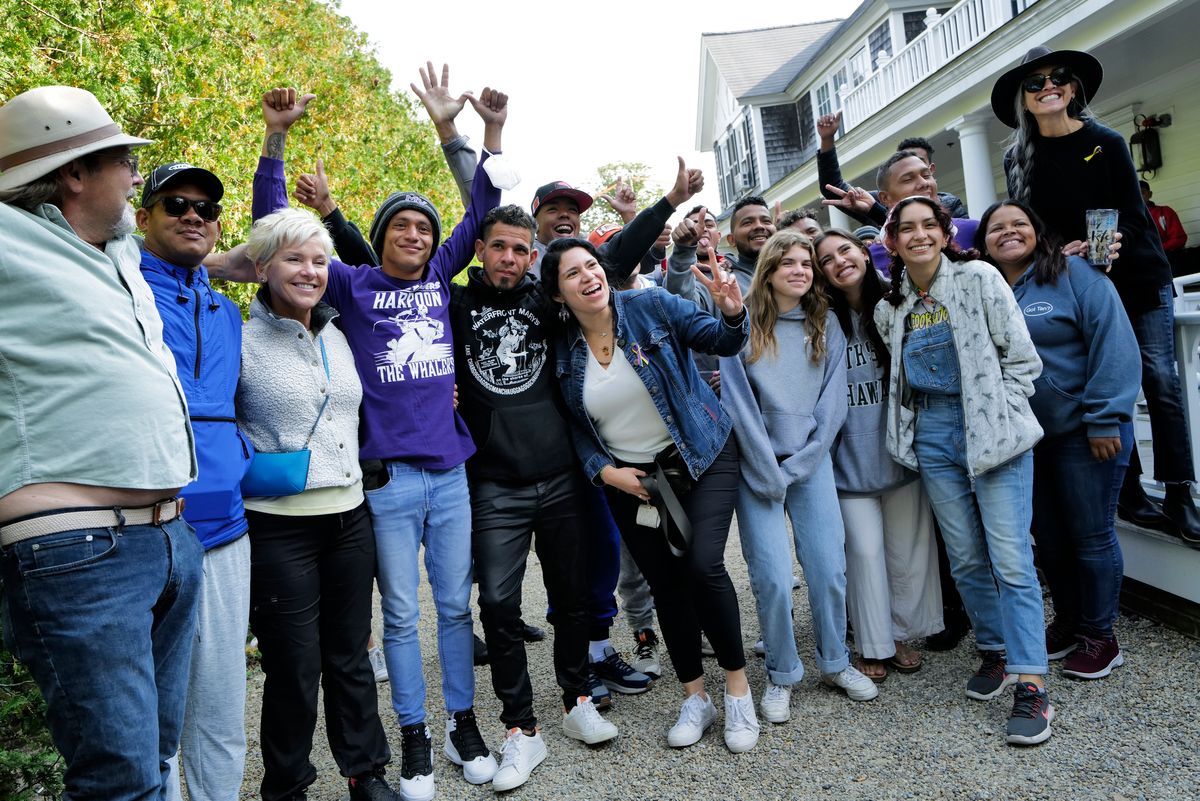 Venezuelan migrants and volunteers celebrate together on Sept. 16 outside St. Andrew's Parish House on Martha's Vineyard. (Carlin Stiehl for the Boston Globe via Getty Images)
--

Lawyers representing Venezuelan migrants who were recently flown to Martha's Vineyard, Massachusetts, on orders from Florida Gov. Ron DeSantis filed a class action lawsuit Tuesday alleging the Republican governor and his state's transportation secretary perpetrated a "fraudulent and discriminatory scheme" against them.

The suit, which was filed Tuesday afternoon in U.S. District Court in Boston, said the legal asylum-seekers who boarded two flights from Texas to the wealthy island resort were told they would be sent to Boston or Washington, D.C.

The filing further claims that in an effort to mislead the migrants, Florida officials "manufactured" an "official-looking brochure" listing fake benefits. Migrants were also offered incentives such as $10 McDonald's gift cards if they boarded the flights.

"These immigrants, who are pursuing the proper channels for lawful immigration status in the United States, experienced cruelty akin to what they fled in their home country," the lawsuit argues.

"Defendants manipulated them, stripped them of their dignity, deprived them of their liberty, bodily autonomy, due process, and equal protection under law, and impermissibly interfered with the federal government's exclusive control over immigration in furtherance of an unlawful goal and a personal political agenda," the document adds.

The plaintiffs are asking the court to find Florida's actions violated their Fourth and 14th Amendment rights, as well as the Civil Rights Act of 1964, as state officials "intentionally targeted only individuals who are non-white and born outside the United States."

Oscar A. Chacón, executive director of case plaintiff Alianza Americas, said in a statement that "for the governor of Florida to cynically use recently arrived immigrants who have applied for asylum in the U.S. to advance a hate-driven agenda intended to create confusion and rejection throughout the country is not only morally despicable but utterly contrary to the best traditions of humanitarian protection embraced by most Americans."

"That is why we have taken the step to legally challenge what we view not only as a morally reprehensible action but what we believe is also illegal," he continued.

"We want to do everything we can to prevent more abuses against newly arrived immigrants," added Chacón, "especially asylum-seekers who deserve support, protection, and to be recognized for the incredible contributions they make to the U.S., as well as their loved ones in their home countries."

On Tuesday, Common Dreams reported that Javier Salazar, the sheriff of Bexar County, Texas — the planes to Massachusetts departed from San Antonio, within his jurisdiction — had launched a criminal investigation into the flights.

DeSantis said last Friday that the recent flights "are just the beginning of efforts" and that he may work with Texas Gov. Greg Abbott to arrange future removals. DeSantis insisted last week that the migrants' relocations were "all voluntary."

Two other Republican governors — Abbott and Arizona's Doug Ducey — have sent migrants to Chicago, New York, Washington, D.C., and Sacramento. In total, more than 13,000 people have been transported to so-called sanctuary cities since April.

Asked during a Tuesday press conference about reports that DeSantis may send migrants to Delaware, his home state, President Biden said that the Florida governor "should come visit."

"We have a beautiful shoreline," the president added.

about DeSantis and Martha's Vineyard