The return of fascism: Fueled by widening inequality and the bankruptcy of liberalism

A neofascist party will likely take power in Italy — and if economic collapse continues, there will be more 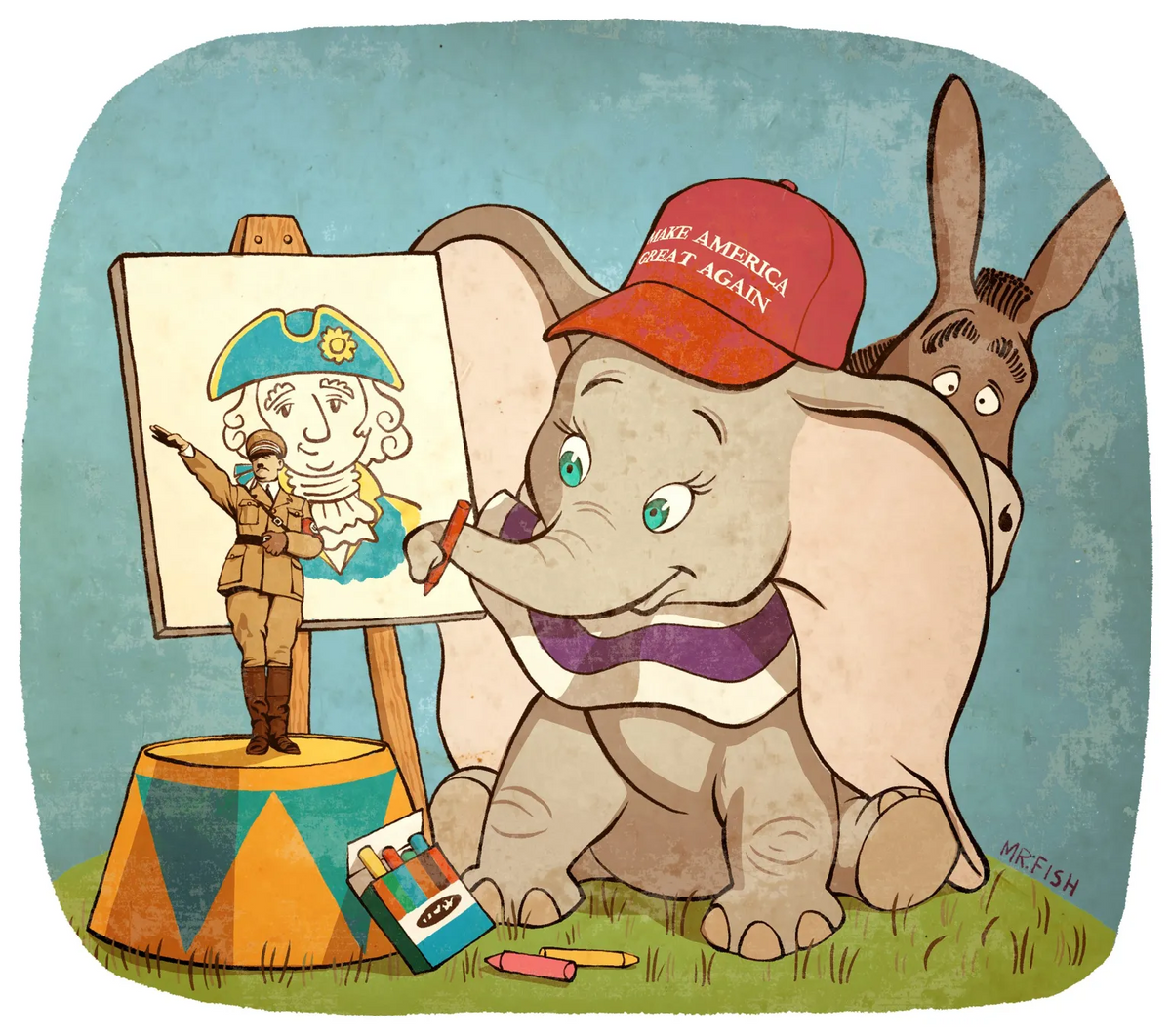 "The Bankruptcy of the Liberal Ass" (Mr. Fish/original to ScheerPost)
--

Energy and food bills are soaring. Under the onslaught of inflation and prolonged wage stagnation, wages are in free fall. Billions of dollars are diverted by Western nations at a time of economic crisis and staggering income inequality to fund a proxy war in Ukraine. The liberal class, terrified by the rise of neofascism and demagogues such as Donald Trump, have thrown in their lot with discredited and reviled establishment politicians who slavishly do the bidding of the war industry, oligarchs and corporations.

The bankruptcy of the liberal class means that those who decry the folly of permanent war and NATO expansion, mercenary trade deals, exploitation of workers by globalization, austerity and neoliberalism come increasingly from the far right. This right-wing rage, dressed up in the United States as Christian fascism, has already made huge gains in Hungary, Poland, Sweden, Italy, Bulgaria and France and may take power in the Czech Republic, where inflation and rising energy costs have seen the number of Czechs falling below the poverty line double.

By next spring, following a punishing winter of rolling blackouts and months when families struggle to pay for food and heat, what is left of our anemic Western democracy could be largely extinguished.

Can we stop pretending that America is a functioning democracy?

Extremism is the political cost of pronounced social inequality and political stagnation. Demagogues, who promise moral and economic renewal, vengeance against phantom enemies and a return to lost glory, rise out of the morass. Hatred and violence, already at the boiling point, are legitimized. A reviled ruling class, and the supposed civility and  democratic norms it espouses, are ridiculed.

It is not, as the philosopher Gabriel Rockhill points out, as if fascism ever went away. "The U.S. did not defeat fascism in WWII," he writes, "it discretely internationalized it." After World War II the U.S., U.K. and other Western governments collaborated with hundreds of former Nazis and Japanese war criminals, whom they integrated into Western intelligence services, as well as fascist regimes such as those in Spain and Portugal. They supported right-wing anti-communist forces in Greece during its civil war in 1946 to 1949, and then backed a right-wing military coup in 1967. NATO also had a secret policy of operating fascist terrorist groups. Operation Gladio, as the BBC detailed in a now-forgotten investigative series, created "secret armies," networks of illegal stay-behind soldiers, who would remain behind enemy lines if the Soviet Union made a military move into Europe. In actuality, the "secret armies" carried-out assassinations, bombings, massacres and false-flag terror attacks against leftists, trade unionists and others throughout Europe.

See my interview with Stephen Kinzer here about the postwar activities of the CIA, including its recruitment of Nazi and Japanese war criminals and its creation of black sites where former Nazis were hired to interrogate, torture and murder suspected leftists, labor leaders and communists, detailed in his book "Poisoner in Chief: Sidney Gottlieb and the CIA Search for Mind Control."

Fascism, which has always been with us, is again ascendant. The far-right politician Giorgia Meloni is expected to become Italy's first female prime minister after elections on Sunday. In a coalition with two other far-right parties, Meloni is forecast to win more than 60 percent of the seats in Parliament, though the left-leaning 5-Star Movement may put a dent in those expectations.

Meloni got her start in politics as a 15-year-old activist for the youth wing of the Italian Social Movement, founded after World War II by supporters of Benito Mussolini. She calls EU bureaucrats agents of "nihilistic global elites driven by international finance." She peddles the "Great Replacement" conspiracy theory that nonwhite immigrants are being permitted to enter Western nations as part of a plot to undermine or "replace" the political power and culture of white people. She has called on the Italian navy to turn back boats with immigrants, which the far-right Interior Minister Matteo Salvini did in 2018. Her Fratelli d'Italia party (Brothers of Italy) is a close ally of Hungary's prime minister, Viktor Orbán. A European Parliament resolution recently declared that Hungary can no longer be defined as a democracy.

Meloni and Orbán are not alone. Sweden Democrats, which took more than 20 percent of the vote in Sweden's general election last week to become the country's second largest political party, was formed in 1988 from a neo-Nazi group called BSS, or Keep Sweden Swedish. It has deep fascist roots. Of the party's 30 founders, 18 had Nazi affiliations, including several who served in the Waffen SS, according to Tony Gustaffson, a historian and former Sweden Democrat member. France's Marine Le Pen took better than 41 percent of the vote in April against Emmanuel Macron. In Spain, the hard-right Vox party is the third-largest party in Spain's Parliament. The far-right German AfD or Alternative for Germany party took more than 12 percent in federal elections in 2017, making it the third-largest party, though it lost a few points in the 2021 elections. The U.S. has its own version of fascism, embodied in a Republican Party that coalesces in cult-like fashion around Donald Trump, embraces the magical thinking, misogyny, homophobia and white supremacy of the Christian Right and actively subverts the election process.

Giorgia Meloni and Viktor Orbán are not alone. There are also the Sweden Democrats, the Vox party in Spain, AfD in Germany and Marine Le Pen's movement in France — not to mention the Trump cult.

Economic collapse was indispensable to the Nazis' rise to power. In the 1928 elections in Germany, the Nazi party received less than 3 percent of the vote. Then came the global financial crash of 1929. By early 1932, 40 percent of the German insured workforce, six million people, was unemployed. That same year, the Nazis became the largest political party in the German parliament. The Weimar government, tone deaf and hostage to the big industrialists, prioritized paying bank loans and austerity rather than feeding and employing a desperate population. It foolishly imposed severe restrictions on who was eligible for unemployment insurance. Millions of Germans went hungry. Desperation and rage rippled through the population. Mass rallies, led by a collection of buffoonish Nazis in brown uniforms who would have felt at home at Mar-a-Lago, denounced Jews, Communists, intellectuals, artists and the ruling class as internal enemies. Hate was their main currency. It sold well.

The evisceration of democratic procedures and institutions, however, preceded the Nazis' ascension to power in 1933. The Reichstag, the German Parliament, was as dysfunctional as the U.S. Congress. The Socialist leader Friedrich Ebert, president from 1919 until 1925, and later Heinrich Brüning, chancellor from 1930 to 1932, relied on Article 48 of the Weimar Constitution to largely rule by decree to bypass the fractious Parliament. Article 48, which granted the president the right in an emergency to issue decrees, was "a trapdoor through which Germany could fall into dictatorship," historian Benjamin Carter Hett writes.

Article 48 was the Weimar equivalent of the executive orders liberally used by Barack Obama, Donald Trump and Joe Biden to bypass our own legislative impasses. As in 1930s Germany, our courts  — especially the Supreme Court — have been seized by extremists. The press has bifurcated into antagonistic tribes where lies and truth are indistinguishable, and opposing sides are demonized. There is little dialogue or compromise, the twin pillars of a democratic system.

The two ruling parties slavishly serve the dictates of the war industry, global corporations and the oligarchy, to which they has given huge tax cuts. It has established the most pervasive and intrusive system of government surveillance in human history. It runs the largest prison system in the world. It has militarized the police.

Democrats are as culpable as Republicans. Both ruling parties serve the dictates of the war industry, global corporations and the oligarchy, to which they have given huge tax cuts.

The Nazis responded to the February 1933 burning of the Reichstag, which they likely staged, by employing Article 48 to push through the Decree for the Protection of the People and the State. The fascists instantly snuffed out the pretense of Weimar democracy. They legalized  imprisonment without trial for anyone considered a national security threat. They abolished independent labor unions, freedom of speech, freedom of association and freedom of the press, along with the privacy of postal and telephone communications.

The step from dysfunctional democracy to full-blown fascism was, and will again be, a small one. The hatred for the ruling class, embodied by the establishment Republican and Democratic parties, which have merged into one ruling party, is nearly universal. The public, battling inflation that is at a 40-year high and cost the average U.S. household an additional $717 a month in July alone, will increasingly see any political figure or political party willing to attack the traditional ruling elites as an ally. The more crude, irrational or vulgar the attack, the more the disenfranchised rejoice. These sentiments are true here and in Europe, where energy costs are expected to rise by as much as 80 percent this winter and an inflation rate of 10 percent is eating away at incomes.

The reconfiguration of society under neoliberalism to exclusively benefit the billionaire class, the slashing and privatization of public services, including schools, hospitals and utilities, along with deindustrialization, the profligate pouring of state funds and resources into the war industry, at the expense of the nation's infrastructure and social services, and the building of the world's largest prison system and militarization of police, have predictable results.

Fascist parties cater to emotional yearnings. They give vent to feelings of abandonment, worthlessness, despair and alienation — and promise vengeance against the ruling class.

At the heart of the problem is a loss of faith in traditional forms of government and democratic solutions. Fascism in the 1930s succeeded, as Peter Drucker observed, not because people believed its conspiracy theories and lies but in spite of the fact that they saw through them. Fascism thrived in the face of "a hostile press, a hostile radio, a hostile cinema, a hostile church, and a hostile government which untiringly pointed out the Nazi lies, the Nazi inconsistency, the unattainability of their promises, and the dangers and folly of their course." He added, "nobody would have been a Nazi if rational belief in the Nazi promises had been a prerequisite."

As in the past, these new fascist parties cater to emotional yearnings. They give vent to feelings of abandonment, worthlessness, despair and alienation. They promise unattainable miracles. They too peddle bizarre conspiracy theories, including QAnon. But most of all, they promise vengeance against a ruling class that betrayed the nation.

Hett defines the Nazis as "a nationalist protest movement against globalization." The rise of the new fascism has its roots in a similar exploitation by global corporations and oligarchs. More than anything else, people want to regain control over their lives, if only to punish those blamed and scapegoated for their misery.

We have seen this movie before.

about the fragile state of democracy

Chris Hedges is the former Middle East bureau chief of the New York Times, a Pulitzer Prize winner and a columnist at ScheerPost. He is the author of several books, including "America: The Farewell Tour," "American Fascists: The Christian Right and the War on America" and "War Is a Force That Gives Us Meaning." He previously worked overseas for the Dallas Morning News, the Christian Science Monitor and NPR, and hosted the Emmy-nominated RT America show "On Contact."