After Manchin urged bipartisanship, lawmakers on the right and left united against his bill 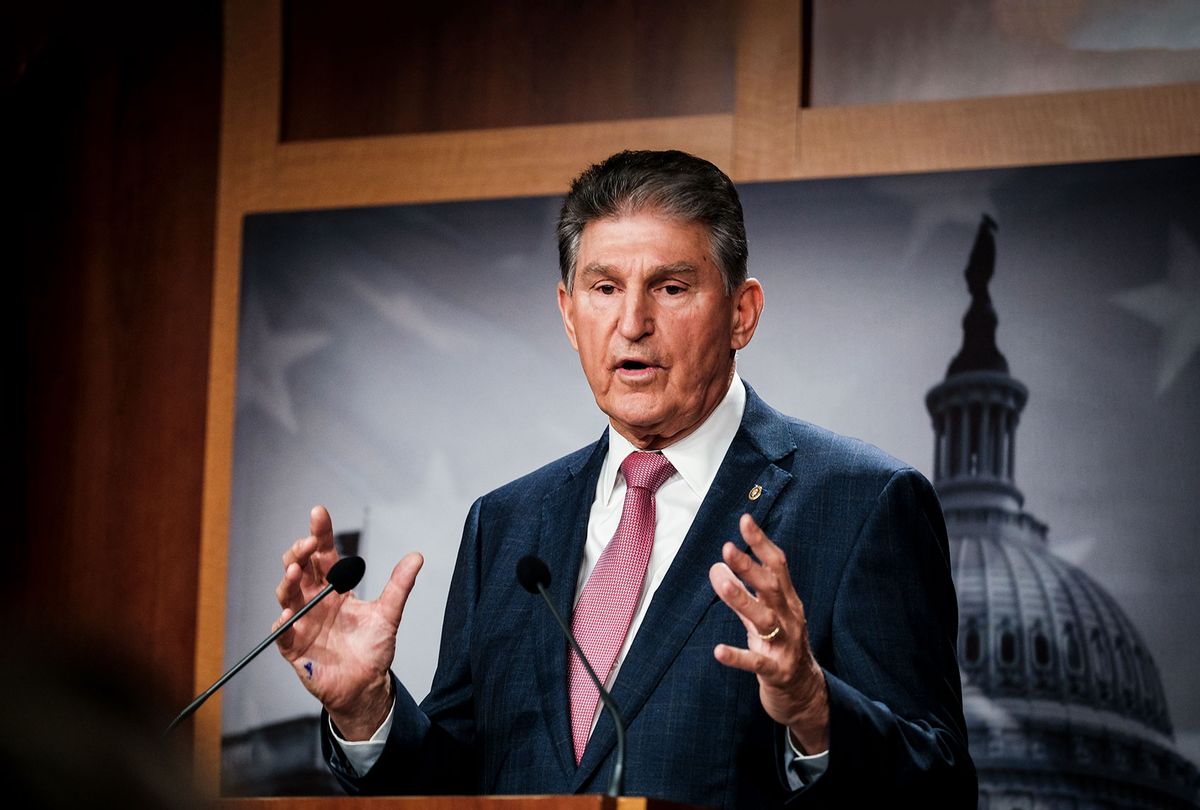 Climate campaigners and people on the frontlines of the planetary emergency celebrated Tuesday after Sen. Joe Manchin requested that his fossil fuel-friendly permitting reforms be stripped out of a stopgap funding bill.

"People power has won the day," said Protect Our Water Heritage Rights Coalition (POWHR) organizer Grace Tuttle. "Thank you to everyone who rallied together to stop this bill. We will keep fighting alongside you. Our letters, calls, rallies, and grassroots activism secured this victory."

"We recognize that the fight is not over, and we stand with all frontline communities from the Gulf Coast to Alaska facing fossil-fueled injustices," Tuttle vowed. "Our movement to stop the Mountain Valley Pipeline is bigger and stronger than ever. We will keep fighting to end the era of fossil fuels and for the future we deserve."

Food & Water Watch executive director Wenonah Hauter declared that "tonight's turnaround represents a remarkable, against-all-odds victory by a determined grassroots climate movement against the overwhelming financial and political might of the fossil fuel industry and its Senate enablers."

This is huge news! People power works! Thank you to the tireless work of frontline leaders and organizers! #StopMVP https://t.co/UpoFiUTEZr

Senate Majority Leader Chuck Schumer, D-N.Y., agreed to hold a vote on permitting reforms in exchange for Manchin, D-W.Va., supporting the Inflation Reduction Act. However, a growing number of lawmakers indicated in recent days that they would oppose an urgent government funding bill if it included the "dirty deal," which would fast-track fossil fuel projects.

Given the mounting opposition to his Energy Independence and Security Act, Manchin on Tuesday evening asked Schumer to cut out his proposal.

"While the campaign against polluting oil and gas is far from over," said Hauter, "this repudiation of Sen. Manchin's so-called permitting reform bill marks a huge victory against dirty energy—and also against dirty backroom Washington deal-making."

"This victory would not have been possible without the coordinated efforts of hundreds of national and grassroots organizations, along with concerned Americans from coast to coast, working together for the health and safety of frontline communities and a livable future for the planet," she stressed.

This is a win for frontline communities, climate science & common sense, and we will continue to fight this destructive, racist side deal!https://t.co/AaVp2M4kYI

Russell Chisholm, a frontline organizer against the Mountain Valley Pipeline—which Manchin specifically included in the bill—similarly said that "what we just witnessed is the power of frontline communities united against a threat to our people and planet."

"Let the downfall of this bill be a lesson to Sen. Manchin, his fossil fuel cronies, and allied politicians: We will no longer be sacrificed for your corrupt interests," he added. "We are united against all fossil fuel projects and we will ensure the livable and just future that we deserve. Join us or step aside."

Collin Rees, United States program manager at Oil Change International, also highlighted the movement that opposed the bill, saying that "Sen. Manchin's dirty deal went down in flames today because Indigenous and frontline communities raised their voices and fought back."

"This legislation would have had deadly consequences for communities and the climate, and we applaud all members of Congress who stood with frontline communities and boldly opposed it. That's real climate leadership," he said, noting the need for "building out clean, renewable energy" rather than more fossil fuel infrastructure.

"Manchin's 'permitting reform' is far from dead, and we will remain vigilant against any attempts to gut bedrock environmental laws by attaching this dangerous package to other must-pass legislation before the end of the Congress," Rees added. "But Manchin's withdrawal of the bill is a powerful victory for the climate movement and communities threatened by fossil fuel expansion."

Neither Schumer nor Manchin gave any indication they are fully giving up on the effort, with the West Virginian saying that "it is unfortunate that members of the United States Senate are allowing politics to put the energy security of our nation at risk."

"A failed vote on something as critical as comprehensive permitting reform only serves to embolden leaders like [Russian President Vladimir] Putin who wish to see America fail," Manchin added. "For that reason and my firmly held belief that we should never come to the brink of a government shutdown over politics, I have asked Majority Leader Schumer to remove the permitting language from the continuing resolution we will vote on this evening."

We did it!! The fight isn't over, but this is a hell of a first round win! #DirtyDeal pic.twitter.com/OpvjyZ2DKI

Schumer, for his part, blamed Republicans—who want permitting policy to go even further in favor of polluters.

"Because American families should not be subject to a Republican-manufactured government shutdown, Sen. Manchin has requested, and I have agreed, to move forward and pass the recently filed continuing resolution legislation without the Energy Independence and Security Act of 2022," he said. "Sen. Manchin, myself, and others will continue to have conversations about the best way to ensure responsible permitting reform is passed before the end of the year."

According to Hauter, Schumer and other Democratic leaders "would be wise to heed the large and growing chorus of voices demanding an end to the fossil fuel era, and put Manchin's permitting plan down for good."

A friend just joined us in our celebrations at the Capitol!

Thank you @SenSanders for your continued leadership in the fight against this #DirtyDeal and fossil fuel projects. pic.twitter.com/ThXofavrXW

Sen. Bernie Sanders, I-Vt., a leading opponent of Machin's bill, swiftly congratulated the more than 650 groups "who made clear that, in the midst of the horrific climate crisis that we face, the last thing we need is a side deal which would build more pipelines and fossil fuel projects that would have substantially increased carbon emissions."

"This is a victory for the survival of the planet and a major loss for the fossil fuel industry," said Sanders. "The United States and the rest of the world must move away from our dependence on authoritarian regimes, like those in Russia and Saudi Arabia, for our energy. We must now go forward in creating millions of new jobs by transforming our energy system away from fossil fuel toward energy efficiency and sustainable energy."

"In the wake of this win and over the next few months, we urge leadership to focus on a winning legislative agenda that unifies the Democratic caucus," Small added. "As we have seen with this fight, attaching controversial policies to must-pass vehicles is a recipe for infighting and failure."