Across the country, local funeral homes are being taken over by private equity firms, who see a booming industry 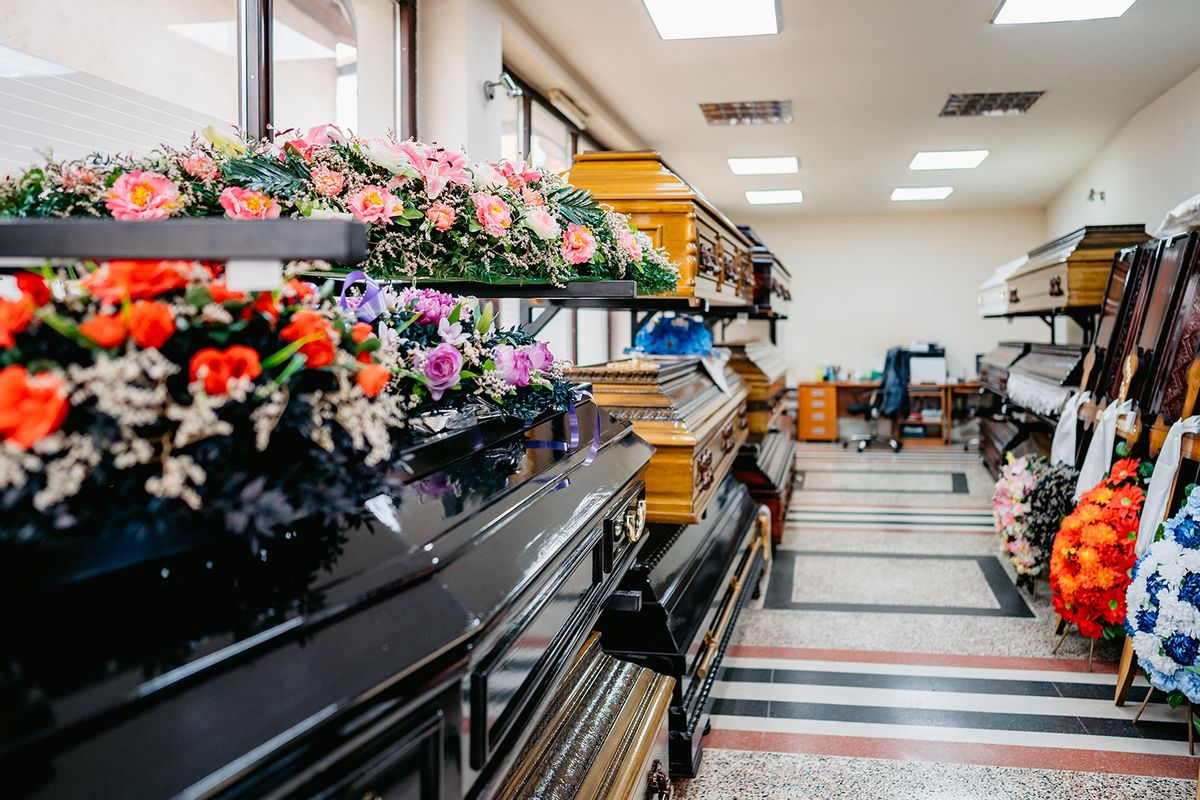 Private equity firms are investing in health care from cradle to grave, and in that latter category quite literally. A small but growing percentage of the funeral home industry — and the broader death care market — is being gobbled up by private equity-backed firms attracted by high profit margins, predictable income, and the eventual deaths of tens of millions of baby boomers.

The funeral home industry is in many ways a prime target for private equity, which looks for markets that are highly fragmented and could benefit from consolidation. By cobbling together chains of funeral homes, these firms can leverage economies of scale in purchasing, improve marketing strategies, and share administrative functions.

According to industry officials, about 19,000 funeral homes make up the $23 billion industry in the U.S., at least 80% of which remain privately owned and operated — mostly mom and pop businesses, with a few regional chains thrown in. The remaining 20%, or about 3,800 homes, are owned by funeral home chains, and private equity-backed firms own about 1,000 of those.

Consumer advocates worry that private equity firms will follow the lead of publicly traded companies that have built large chains of funeral homes and raised prices for consumers. "The real master that's being served is not the grieving family who's paying the bill — it's the shareholder," said Joshua Slocum, executive director of the Funeral Consumers Alliance, a nonprofit that seeks to educate consumers about funeral costs and services.

Although funeral price data is not readily available to the public, surveys by the local affiliates of the alliance have found that when publicly traded or private equity-backed chains acquire individual funeral homes, price hikes tend to follow.

"We believe our pricing is competitive and reasonable in the markets in which we operate," a Service Corporation International official said in an email.

Details of those price increases were provided by Martha Lundgren, a member of the Funeral Consumers Alliance of Arizona's board. She said funeral home acquisitions have led to the cancellation of pricing agreements negotiated on behalf of consumers who are members of the alliance. In 2020, a cremation at Adair Dodge Chapel in Tucson cost members $395, nearly two-thirds off the $1,100 standard price. But after Foundation Partners Group acquired the funeral home, the member pricing agreement was canceled, and the price of a direct cremation rose to $1,370.

Foundation Partners Group officials said the price increases partly reflect the higher price of supplies, such as caskets, as well as increasing labor costs. But most of the increases, they said, represent a move to a more transparent pricing system that includes administrative and transportation fees that other funeral homes add on later.

"We don't take advantage of people in there when they're not thinking clearly," said Kent Robertson, the company's president and CEO. "That's just not who we are."

A big surge of consolidation happened in the U.S. funeral home industry in the late 1980s and early 1990s, and again around 2010, said Chris Cruger, a Phoenix-based consultant to the industry. And acquisitions have reached a feverish pace in the past two to three years. Many investors are banking on a significant uptick in demand for death care services in the coming years as 73 million baby boomers, the oldest of whom will be in their late 70s, continue to age.

"Sheer demographics are obviously in everybody's favor here," Cruger said. Funeral homes have attractive margins already, and combining them into chains to share administrative costs could boost profits even more.

Meanwhile, many funeral home owner-operators are reaching retirement age and have no one in the family willing to take over. A 2021 survey by the National Funeral Directors Association found that 27% of owners planned to sell their business or retire within five years.

The desire to sell, combined with the investment money pouring into the field, has driven prices for funeral homes to new heights. Before private equity turned its eye to funeral homes, they were selling for three to five times their annual revenue. "Now I'm hearing seven to nine," said Barbara Kemmis, executive director of the Cremation Association of North America, a trade group for the cremation industry.

The value in funeral homes lies in more than their brick-and-mortar assets. Funeral home directors are often integral parts of their communities and have established significant goodwill with their neighbors. So when corporate chains acquire these homes, they rarely change the name and often keep the former owners around to smooth the transition.

Tony Kumming, president of the NewBridge Group in Tampa, Florida, helps broker funeral home sales. Many of his clients remain skeptical of the large firms and often will take less money to sell to someone they believe won't stain their hard-earned reputations. Most former owners plan to live in the community and don't want their friends and neighbors to be mistreated. "I'm not saying someone is going to take half of what another company is offering," Kumming said. "But there's two big pieces to a sale now: That's money and the right fit."

Five years ago, when Robert Olthof decided to sell his family's funeral home in Elmira, New York, he contacted some of the large publicly traded funeral home chains. But as representatives from multiple companies visited him to make their offers, Olthof realized that none of the big chains had sent someone versed in the service side of the business. "They sent their accountants, and they sent their lawyers," he recalled. "Everything was about the numbers, the numbers, the numbers. And I didn't like that."

"I can't put a dollar-amount value on how much it's really worth selling to a person who is a funeral director themselves," Olthof said. "Because moving forward, your name is still going to be on the front of that building."

Victoria Haneman, a Creighton University School of Law professor who studies the funeral home industry, worries that new corporate ownership might be devastating for grieving families. "They are not behaving like normal, rational consumers," she said. "They're not bargain-shopping because death is viewed as an inappropriate time to bargain-shop."

For most families, a funeral will be one of the largest expenses they ever incur. But they often enter the shopping process cognitively impaired by grief and unsure of what is customary or appropriate.

Only 1 in 5 consumers visit more than one funeral home to obtain a price list, according to a 2022 survey commissioned by the Consumer Federation of America. And online comparisons are virtually impossible — a study by the federation and the Funeral Consumers Alliance found that just 18% of the funeral homes they sampled listed their prices on their websites. As a result, families generally lean heavily on the expertise of a single funeral director, who has a motive to sell them the most expensive options. So consumers can be pushed into buying packages for open-casket funerals that include embalming and other services that drive up the cost and may be unnecessary.

"Is that sort of pickled, shellacked, cosmetized, preserved corpse where the future will be? I don't know that the answer is 'yes,'" Haneman said. "And I think there are investors who are betting that it's not."

Foundation Partners Group is a prime example. Backed by the private equity firm Access Holdings, the funeral home chain shifted five years ago to acquiring funeral homes with high cremation rates. Cremation rates nationally have been steadily climbing over the past two decades, with nearly 58% of families now choosing cremation over casket burials. Foundation Partners expects that rate to hit 70% by 2030.

The company has acquired more than 75 businesses in high-cremation states, including Arizona, California, Colorado, and Florida. Most of those funeral homes average a bit over 150 funerals per year.

Individual funeral homes "don't have access to marketing budgets, they don't have access to safety and health plans and benefits and these different things," said Robertson, the Foundation Partners CEO. "And because we have the ability to drive marketing and do other things, we also take that 150-call firm to maybe 200 calls."

Robertson said the funeral home industry is different from other sectors that private equity firms might consider investing in, describing it as a calling comparable to working in hospice care. Foundation Partners is fortunate their backers understand the service part of the industry, as well as the financials, he said. "Private equity firms aren't necessarily known for having deep compassion for people. They're more known for their financial returns," he said. "To get both is really important."

Haneman said innovative approaches like Tulip's are sorely needed in the funeral home industry, which has barely changed in 100 years. "It's absurd to me that the average cost of a funeral is running $7,000 to $10,000," she said. "People need less expensive options, and innovation is going to get us there." Tulip charges less than $1,000 for a cremation; ashes are mailed back to the families.

"Private equity investment has the potential to go one of two directions: It's either going to entrench status quo and drive price, or the purpose of the investment is going to be disruption," Haneman said. "And disruption promises the possibility of bringing more affordable processes to market."