“We firmly believe in the workers’ right to fight for their own best interests," one union says 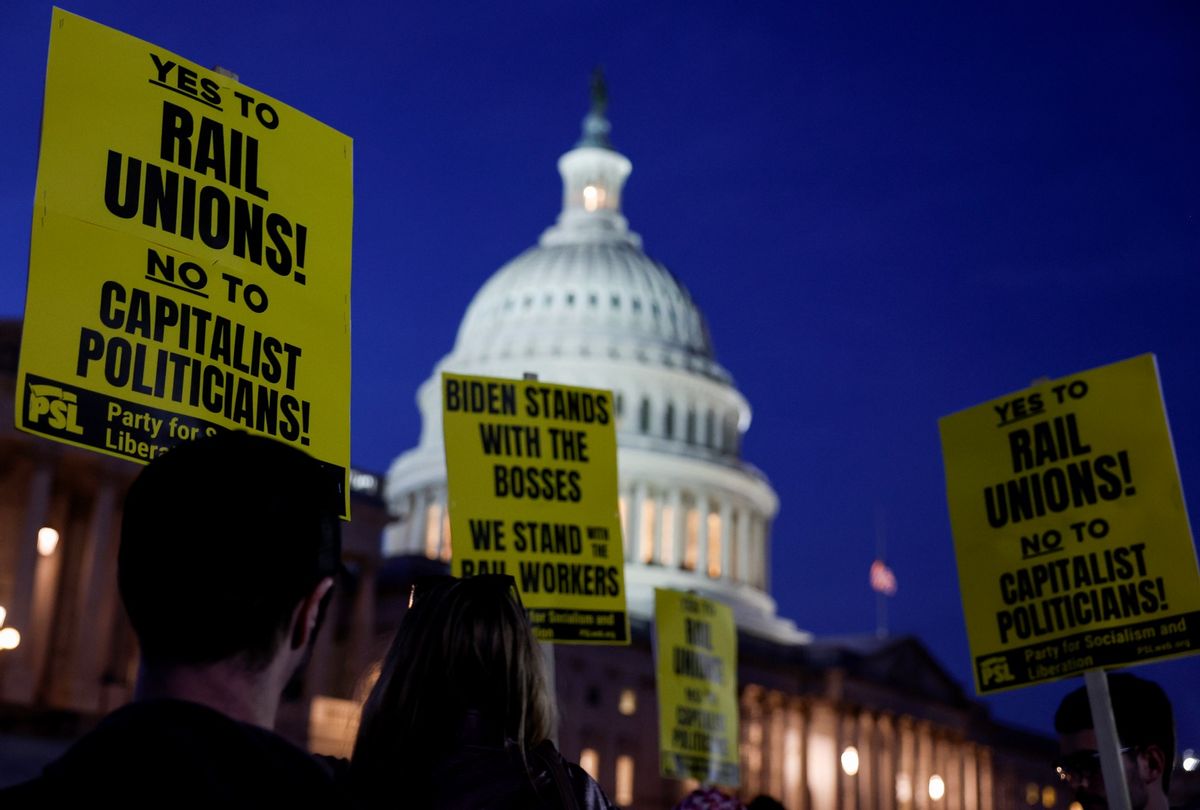 This article originally appeared on Work-Bites

The House of Representatives voted Nov. 30 to impose a tentative pact reached between the nation's freight railroads and labor leaders back in September. The deal was subsequently rejected by the rank and file of four of the industry's larger unions but approved by several others.  The 290 to 137 bipartisan House vote came after President Biden requested Congressional intervention to head off "a potentially crippling national rail shutdown" on Dec. 9.

A second vote to require that the nation's freight rail workers get seven paid sick days, a major sticking point for the unions that rejected the President's Emergency Board's brokered deal passed by a far narrower 221 to 207 votes.  Just three Republicans, crossed over to support the measure that AFL-CIO President Liz Shuler said would be a remedy for a pact that "fell short by not including provisions on paid sick leave or fair scheduling."

"Paid sick leave days are a right that for too long freight railroads have refused to provide to rail workers—that is the issue," said Rep. Donald Payne Jr., D-N.J., who led the Democratic floor debate. "This benefit will cost less than one percent of the profits the railroads reported last year. Our bill will guarantee that freight rail workers will have seven sick leave and I am pleased that we have seen bipartisan support for this idea in the Senate."

Speaking from the floor during the debate, House Speaker Nancy Pelosi pressed for the sick time bill and the imposition of the deal. The outgoing Speaker blasted the rail industry ownership for making "obscene profits on the backs of workers" while it "slashed jobs and cut corners on safety" and demanded "more and more from the workers…Over the last decade they have given $150 billion dollars in handouts to their corporate executives and wealthiest investors."

This is the first time since the 1990s, that Congress has been asked to exercise its power to intervene in a labor dispute under the National Railway Labor Act was enacted in 1926. In 1992, when President George W. Bush asked Congress to act, just a handful of Senator opposed the intervention including a Senator Joe Biden of Delaware.

Both measures now head to the Senate where the bill that imposes the pact is expected to pass but the fate of the sick time provision, which would require 10 Republican votes, is still unclear.

On the floor of the Senate Sen. Sanders, I-Vt., made the case for the paid sick time measure.

"If Congress ends up imposing this contract without the seven-day paid sick leave it will be a travesty," said John Samuelsen, the international president of the Transport Worker Union, in a phone interview.

"It's the 21st century and essential workers who saved us through the pandemic can't have sick leave??? You must make the boss do the right thing," texted Sara Nelson, the international president of the Association of Flight Attendants-CWA. "We stand with Railroad Workers. Their fight is our fight."

In his appeal to Congress for action, President Biden wrote the "agreement was approved by labor and management negotiators in September. On the day that it was announced, labor leaders, business leaders, and elected officials all hailed it as a fair resolution of the dispute between the hard-working men and women of the rail freight unions and the companies in that industry."

"The deal provides a historic 24 percent pay raise for rail workers. It provides improved health care benefits. And it provides the ability of operating craft workers to take unscheduled leave for medical needs," Biden wrote. "Since that time, the majority of the unions in the industry have voted to approve the deal."

In the September 15 celebratory announcement Biden's statement described the pact as "tentative" but left out the salient fact that it would be up to the rank and file of 12 unions, representing over 115,000 rail workers to ratify it. "I thank the unions and rail companies for negotiating in good faith and reaching a tentative agreement that will keep our critical rail system working and avoid disruption of our economy," Biden asserted.

Earlier this week in asking Congress to step in, Biden expressed support for paid sick leave but suggested that Congress should hold off on voting to impose them. "However well-intentioned, any changes would risk delay and a debilitating shutdown," he wrote.

Biden continued. "As a proud pro-labor President, I am reluctant to override the ratification procedures and the views of those who voted against the agreement. But in this case – where the economic impact of a shutdown would hurt millions of other working people and families – I believe Congress must use its powers to adopt this deal."

Biden's decision to enlist Congress now to impose the pact was blasted by Railroad Workers United, a national coalition of unionized railroad workers.

"Unfortunately, the 'most labor-friendly president' has opted to side with Big Business and call for a thwarting of railroad workers' rights to strike," said the Railroad Workers United, a national coalition of unionized railroad workers, in a statement. "On Monday, President Biden called upon Congress to adopt legislation that would mandate a contract and end the threat of any legally sanctioned rail strike from happening."

"The SMART Transportation Division does not support the notion of Congress intervening in our collective bargaining negotiations to prevent a strike," SMART-TD said in a statement. "We firmly believe in the workers' right to fight for their own best interests, as well as the best interests of their families. Unfortunately, threats to the economy have caused this Congress to believe that a strike aversion is the best course for this nation."

SMART-TD's statement continued. "Our members want and need sick leave, but even more so, they need relief from the damning effects of operational changes made by the railroads over the last five years. If Congress truly wants to take action to improve the industry for our members, then we recommend legislation that will work to reverse the devastation of Precision Scheduled Railroading."

For years, rail unions have been warning about the implications of a dramatic ownership consolidation driven by Wall Street investors which has seen close to 40 Class I railroads boil down to just a handful with a near monopoly hold on the industry.

"The shackles [of regulation] have been removed and you have a bunch of irresponsible corporate leadership at the railroads who are abusing the monopoly power they have gained through mergers and acquisitions," said Matt Parker, a Union Pacific engineer, with the Brotherhood of Locomotive Engineers and Trainmen, who is also affiliated with Railway Workers United. [Listen Here]