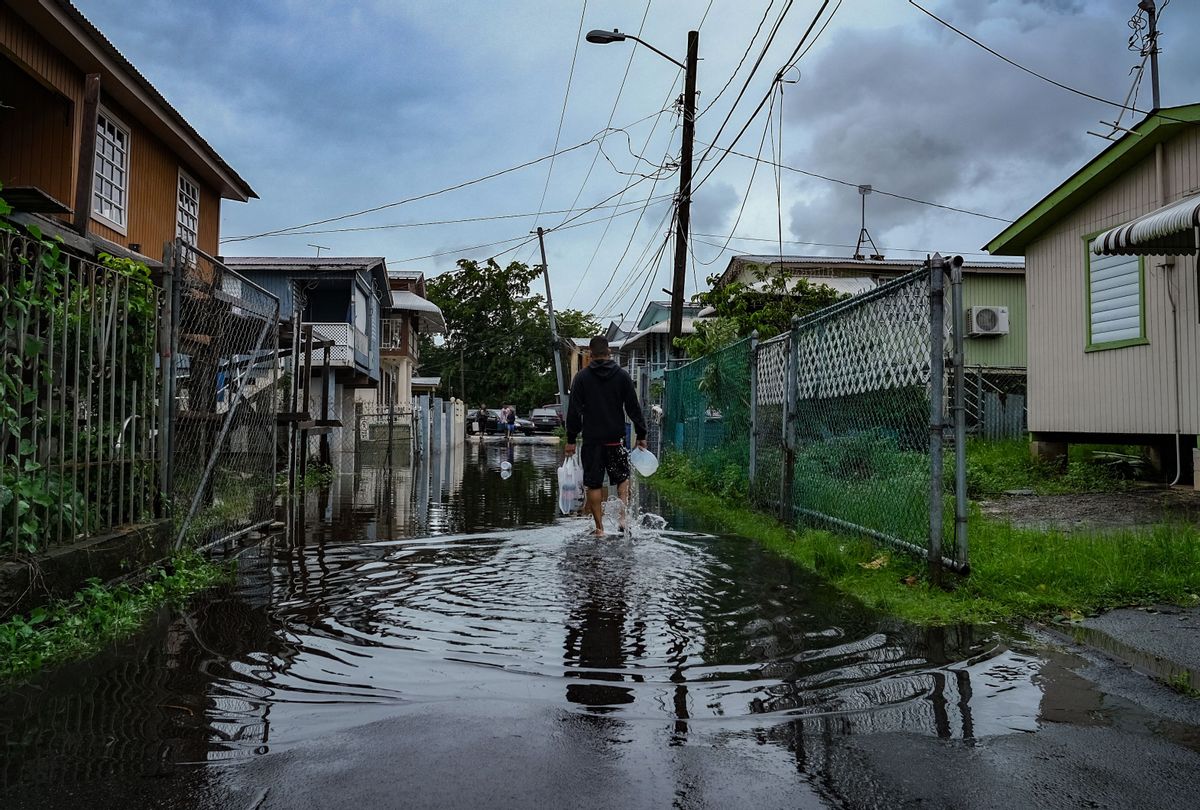 A man walks down a flooded street in the Juana Matos neighborhood of Catano, Puerto Rico, on September 19, 2022, after the passage of Hurricane Fiona. (AFP via Getty Images)
--

Puerto Rico could get $3 billion dollars for rooftop solar energy and battery storage if Congress approves a Biden administration request made earlier this week. The help is sorely needed.

The archipelago has been repeatedly hit by blackouts after a series of devastating hurricanes that crippled the electricity grid. In 2017, Hurricane Irma, which narrowly missed the main island but caused widespread blackouts, was followed by another — Maria — which killed over 4,000 people. Maria's damage to Puerto Rico's grid was so great that it took 11 months for power to be fully restored to the main island.

Both Puerto Rican activists and United States officials believe that investing in solar energy systems will help residents keep power on in their homes during what are certain to be more frequent and destructive storms in the Caribbean. Puerto Rico's energy grid has been criticized for years for its unreliability under normal circumstances, even without the storm damage to power lines and generators.

While a growing number of Puerto Rican households are taking the initiative to install solar panels on their rooftops, the majority of households continue to rely on electricity through the mainstream power grid, or run diesel-powered generators. Generators, however, are expensive and pollute the air.

But high costs and environmental considerations are only part of the picture. Electricity blackouts on Puerto Rico in the wake of tropical storms have exacerbated the already devastating public health and safety crises that followed. Researchers have estimated that in the three months after Hurricane Maria there was a 62 percent increase in mortality,

Many deaths following the hurricane occurred in isolated and mountainous regions where residents were unable to access outside water or medical facilities. But the lack of electricity at home may have been the biggest factor in the high mortality, as residents were unable to boil water, refrigerate food and certain medicines, or run air-conditioning in their houses.

After Hurricane Fiona hit in September, residents who had installed solar panels on their homes were able to maintain their power even as the energy grid failed yet again. In spite of this, most households in Puerto Rico simply cannot afford to switch to solar without financial assistance offered by the federal government. The majority of census tracts in Puerto Rico are defined as disadvantaged, frequently due to high local energy costs coupled with low household incomes. Puerto Ricans as a whole pay some of the highest energy bills in the United States.

In San Juan, Puerto Rico's capital, the average cost to install solar panels for a household is nearly $12,000. While that's less than what the average household on the U.S. mainland would have to pay for home solar, the cost is too much for most Puerto Ricans; the territory's median household income is around  $21,000.

Before Hurricane Maria in 2017, household adoption of solar energy on Puerto Rico appeared to be more motivated by reducing electricity bills. Now, simply being able to turn the lights on has become just as strong a motivation. The archipelago is also considered a favorable location for widespread solar power adoption.

A preliminary study in 2021 from the National Lab of Renewable Energy concluded that transitioning to rooftop solar energy could produce up to four times the current energy needs of Puerto Rico. This potential is largely due to its high amount of exposure to sunlight throughout the year.

While some Puerto Ricans may acknowledge the value of allocating financial resources to rooftop solar energy, others are not convinced that relying on federal funds will lead to any fundamental changes on the ground.

"Since Maria, the U.S. government has made many allocations of funds that never arrive or their impacts are not seen in Puerto Rico," said Arturo Massol Deyá, the executive director of Casa Pueblo, a Puerto Rican organization that supports community self-management projects.

Instead, Massol Deyá said, Casa Pueblo and other organizations are working to develop an independent electricity grid centered on solar energy projects that are run for and by local communities in Puerto Rico.

"We're working to break the dependency model," he said.