‘Y'all,’ that most Southern of Southernisms, is going mainstream – and it’s about time

Despite some negative class and cultural connotations, the word seems to have grown in popularity

By David B. Parker 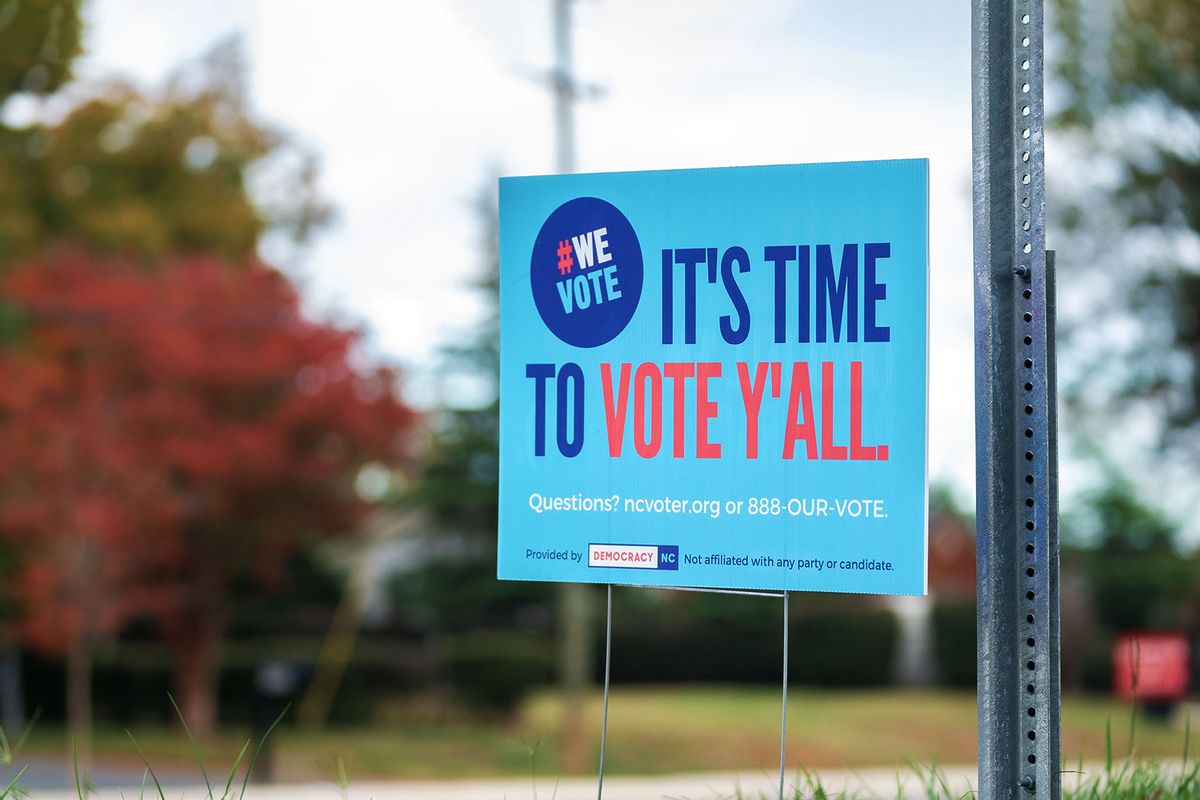 A sign made by the group Democracy NC reads It's time to vote y'all, on November 5, 2022 in Charlotte, North Carolina. Today marked the last day for early voting in the state before Election Day on November 8. (Sean Rayford/Getty Images)
--

Southern Living magazine once described "y'all" as "the quintessential Southern pronoun." It's as iconically Southern as sweet tea and grits.

While "y'all" is considered slang, it's a useful word nonetheless. The English language doesn't have a good second person plural pronoun; "you" can be both singular and plural, but it's sometimes awkward to use as a plural. It's almost like there's a pronoun missing. "Y'all" fills that second person plural slot – as does "you guys," "youse," "you-uns" and a few others.

I'm interested in "y'all" because I was born in North Carolina and grew up saying it. I still do, probably a couple dozen times a day, usually without intention or even awareness. As a historian who has researched the early history of the word, I'm also interested in how the word's use has changed over the years.

"Y'all" might serve an important function, but it has acquired negative connotations.

Back in 1886, The New York Times ran a piece titled "Odd Southernisms" that described "y'all" as "one of the most ridiculous of all the Southernisms."

That perception has persisted. Like the Southern dialect in general, the use of "y'all" has often been seen as vulgar, low-class, uncultured and uneducated. As someone noted in Urban Dictionary, "Whoever uses [y'all] sounds like a hillbilly redneck."

In a more recent New York Times essay, writer Maud Newton said that she associated the word with her father, who "defended slavery, demanded the subservience of women and adhered to 'spare the rod and spoil the child.'" He also demanded that his children say "y'all" rather than "you guys." She grew up hating the word.

At a time when many Americans are calling for the removal of Confederate monuments and opposing the Lost Cause mythology, "y'all," with its Southern overtones, might make some people uncomfortable – a misguided reaction, perhaps, but one that has been felt by both those who hear it and those who say it.

Imagine "y'all" with a British accent

The word has not always had such negative connotations.

The etymology of "y'all" is murky. Some linguists trace it back to the Scots-Irish phrase "ye aw"; others suggest an African American origin, perhaps from the Igbo word for "you" brought over by Nigerian-born enslaved people. According to the "Oxford English Dictionary," the word first appeared in print in 1856, and all of its examples are sources connected to the American South. Michael Montgomery, a noted linguist, said that early use of the word "is unknown in the British Isles."

But recently I used some of the new digital literary databases to search for older uses of the word, and I found over a dozen examples. They were all in dramatic or poetic works dating back to the 17th century and published in London. The earliest "y'all" that I uncovered was in William Lisle's "The Faire Æthiopian," published in 1631 – "and this y'all know is true."

My examples push "y'all" back 225 years before the citation in the "Oxford English Dictionary," and they show that the word appeared first in England rather than the United States.

I think it's important to point out that it originated in a more formal context than what's commonly assumed. There are none of the class or cultural connotations of the later American examples.

Ironically, at the same time that some people have shied away from using "y'all," the word seems to have grown in popularity. An article on exactly this topic, published in the Journal of English Linguistics in 2000, was titled "The Nationalization of a Southernism"; based on scientific polling, the authors suggested that "y'all" will soon be seen as an American, rather than Southern, word.

There might be several reasons for this. One is that African American use of the word in music and other forms of popular culture has made it more familiar – and, therefore, acceptable – to those who didn't grow up with it.

Second, "you guys," another common alternative for the second-person plural pronoun, is losing support because of its sexist connotations. Are females included in you guys? How about those who identify as non-binary?

Maud Newton eventually came to embrace "y'all." When she moved to Tallahassee, Florida, after law school, she found that "in grocery stores and coffee shops, on the street and in the library, everyone – Black and white, queer and straight, working-class and wealthy – used y'all, and soon I did, too."

"Y'all means all" – that's a wonderful phrase that seems to be popping up everywhere, from T-shirts and book titles to memes and music. A song written by Miranda Lambert for Netflix's "Queer Eye" beautifully captures the spirit of the phrase:

You can be born in Tyler, Texas, Raised with the Bible Belt; If you're torn between the Y's and X's, You ain't gotta play with the hand you're dealt . . . Honey, y'all means all.

By David B. Parker

MORE FROM David B. Parker