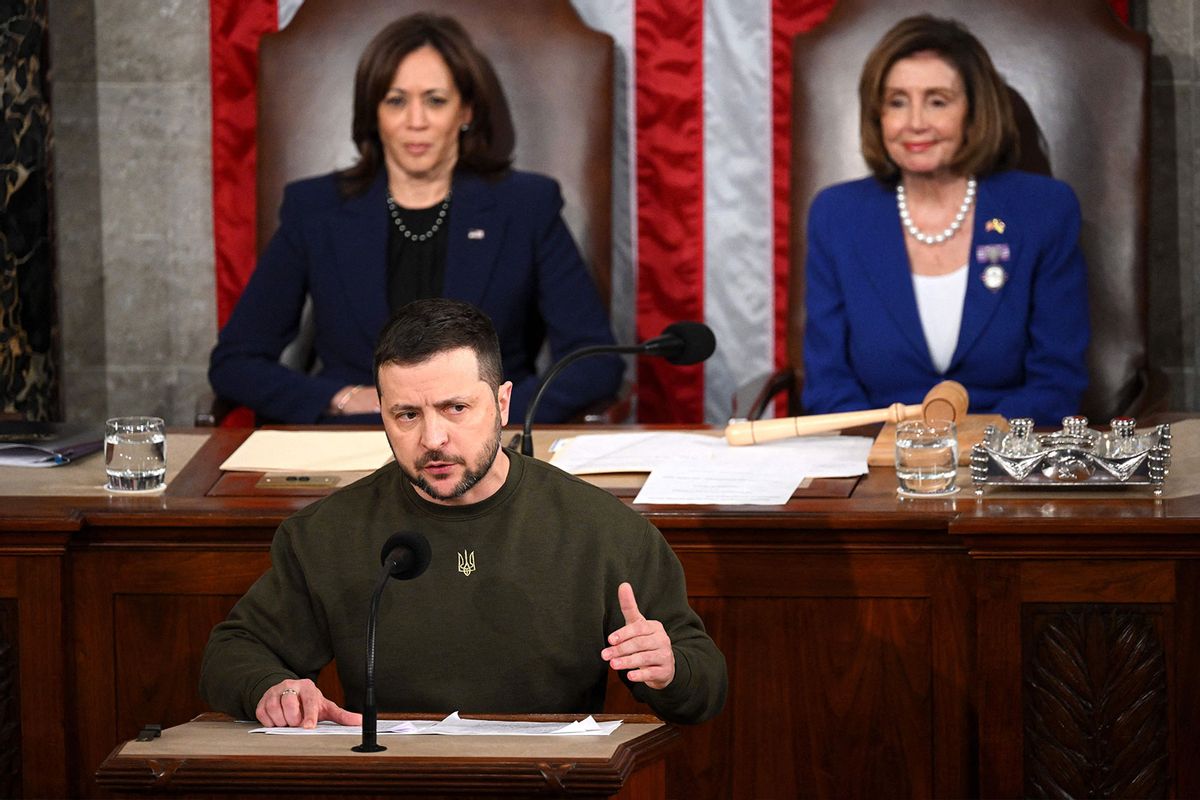 Ukraine's President Volodymyr Zelensky addresses the US Congress flanked by US Vice President Kamala Harris (L) and US House Speaker Nancy Pelosi (D-CA) at the US Capitol in Washington, DC on December 21, 2022. (MANDEL NGAN/AFP via Getty Images)
--

Ukrainian President Volodymyr Zelenskyy is widely popular, both in the U.S. and around the world. You'd have to be the most churlish asshole alive not to feel moved by his resolve to protect his nation's sovereignty against the egomanaical supervillain impulses of Russian President Vladimir Putin, who has been waging an unprovoked war against Ukraine for nearly a year. Zelenskyy's Wednesday night speech before a joint session of Congress wasn't just moving. It was also persuasive on the brass tacks arguments. Military aid to Ukraine is "not charity," he argued, but "an investment in global security and democracy."

As Fred Kaplan at Slate argued, the speech "was a resounding success" that circumvented Republicans who previously had made noises about cutting aid to Ukraine. The Senate approved $44.9 billion in military, humanitarian and economic aid to Ukraine on Thursday afternoon, as part of a $1.7 trillion government spending bill that passed 68-29, and is expected to pass the House as well.

Zelenskyy's argument that Ukraine's victory is necessary to protect global democracy is hard to argue against. Especially in recent years, Putin has not hidden his contempt for Western-style democracy or desire to see it collapse around the globe. Even with all the caveats and nuances one could possibly inject into this, the "bad guys" and "good guys" are crystal clear in this scenario.

Except, that is, to some Republicans in Congress and a number right-wing pundits. That world is not just anti-Zelenskyy, but imbued with such vicious sentiments that even the most jaded political watchers were shocked. This isn't just about arguments over whether aid to Ukraine is being well spent, or about whether Ukraine is strategically crucial to U.S. interests. This was about full-on vitriol, to the point where even Republicans who are open to cutting aid to Ukraine were made uncomfortable.

There's one major reason things got so ugly so fast. The debate over Ukraine, at least among Republicans, is a stand-in for the largely unspoken but very real debate that's roiling the party: Do they still believe in democracy? A faction in the GOP has decided that they don't, and now supports authoritarianism, or the F-word. Many other Republicans feel uneasy about this direction, but don't seem able to stand up to the fascist faction.

If that sounds hyperbolic, you should hear some of the things the fascist faction had to say about Zelenskyy, who may have his flaws, but has captured the world's attention with his undoubted sincerity in fighting to save his embattled country from Russian conquest and occupation.

Right after Zelenskyy's speech to Congress, Tucker Carlson of Fox News described him as a "Ukrainian strip club manager" and falsely said that Ukraine had been the aggressor, portraying Putin as the victim of a Ukrainian plot to "topple the Russian government." He also echoed the antisemitic talking points the Russian government has deployed against Zelenskyy, who is Jewish, by accusing him of waging "ongoing war against Christianity." (The decree in question targets groups for pro-Russian sentiment, not for religious belief. That may well be a legitimate free speech issue, but it's not a religious freedom issue.)

Volodymyr Zelenskyy delivers America a Christmas message: But why was he here?

Jesse Watters of Fox News also rolled out the Russia-as-victim line, saying that Zelenskyy was "charming, but he's a killer" motivated by "vengeance."

Turning Points USA founder Charlie Kirk called Zelenskyy an "uppity foreigner" and an "international welfare queen." Over the weekend, his group had a conference where the keynote speaker on Sunday, defeated Arizona gubernatorial candidate Kari Lake, bragged that she was "a proud election-denying deplorable." Donald Trump Jr., unoriginal thinker to the end, also used the "international welfare queen" slur.

Most Americans support Ukraine, with 65% agreeing that the U.S. should send arms to Ukraine and 75% supporting sanctions against Russia, even as those have driven up oil prices around the world. This onslaught of pro-Putin propaganda on the right has softened conservative support for Ukraine, but even so 55% of Republican voters are in favor of military aid.

This tension between America's overwhelming pro-Ukraine sentiment and the far right's caustic hatred was reflected in the behavior of congressional Republicans at Zelenskyy's speech Wednesday night. Most Republicans, even those who have expressed doubt about more funding, at least showed moral support for Zelenskyy, standing to applaud his speech and telling reporters they believe in his cause.

But a few notable Republican members made a big show out of spurning Zelenskyy, including Rep. Marjorie Taylor Greene of Georgia, who called him the "shadow president," eyebrow-raising talk from a woman who has repeatedly dabbled in antisemitic conspiracy theories. Reps. Matt Gaetz of Florida and Lauren Boebert of Colorado made a big show both of refusing a security screening and of staring at their phones instead of listening to Zelenskyy's speech. Sen Josh Hawley of Missouri, like Greene, refused even to show up.

It's not surprising that the Republicans who opposed Zelenskyy happen to be among the biggest apologists for the Jan. 6 insurrection and the Trump movement's other assaults on democracy. Whatever hand-waving excuses are being employed, it's obvious that their loathing for Ukraine and its president is ideological, rooted in the same distaste for democracy that led Putin to invade  in the first place. That also helps explain why they don't seem worried about taking an unpopular stand against an embattled nation the whole world has embraced. Opposing democracy, after all, is about the desire to enact and enforce your political will, regardless of public opinion.

Most Republican politicians didn't act like jerks while Zelenskyy was speaking, but they're making noises about how he needs "accountability" and "scrutiny" if he wants more money. Or, in the case of the presumptive House speaker, Rep. Kevin McCarthy of California, they say that Ukraine doesn't deserve a "blank check," which, of course, it has never been offered. Those objections may sound reasonable at first, but they fall apart if you actually devote some thought to them. Since when have any Republicans supported constraints on military spending? Every single GOP member who suddenly wants to talk about fiscal responsibility wanted to continue the pointless, expensive and unwinnable war in Afghanistan.

No, the "skepticism" about Ukraine isn't about money or military strategy. All this is in line with McCarthy's vote to overturn the 2020 election, his efforts to sabotage the Jan. 6 committee and his promise to fund "investigations" into how the Capitol insurrectionists wound up in prison. There are clearly real tensions between the Republicans who actively want to dismantle democracy and those who are less eager to blow up America's entire political system. Still, the way this Ukraine debate is playing out makes clear that the fascists have the upper hand. Under more normal political circumstances, support for Ukraine would be a no-brainer for Republicans: They can position themselves as "pro-democracy" while doing little or nothing to support it at home, plus directing all that military spending into the pockets of some of their biggest donors. The current reluctance is entirely about a desire to placate the fascist faction. McCarthy and other GOP leaders know all too well those people can destroy them, and in many cases are begging for an excuse to do so.

One could quibble over whether supporting Ukraine and believing in democracy are the same thing, although Putin's behavior tends to override any effort at nuanced debate. But within Republican ranks, there's no doubt that the issue of Ukraine's independence and self-determination has become is a proxy for the party's internal debate over American democracy. Even the most stalwart authoritarians in the GOP know better than to come right out and say they're against democracy and it's time to do away with it. So they gaslight the nation instead, clumsily repackaging Donald Trump's desire to be installed as a dictator as a narrative about a "stolen" or "rigged" election, and concerted efforts to undermine democracy as measures to ensure "election security." Rooting against Ukraine is a way to advance the anti-democracy agenda, without quite openly embracing it.

Ironically, all the Republican game-playing on Ukraine only ends up reinforcing the argument Zelenskyy made in his speech on Wednesday: Protecting his country against Russian tyranny is ultimately about protecting democracy. Whatever criticisms could be made of his leadership or his imperfect nation, Zelenskyy's biggest opponents in Congress hate him because they hate democracy.