How the Democrats became the party of endless war

Democrats long since gave up challenging the war economy — which may kill us all, and is definitely bankrupting us 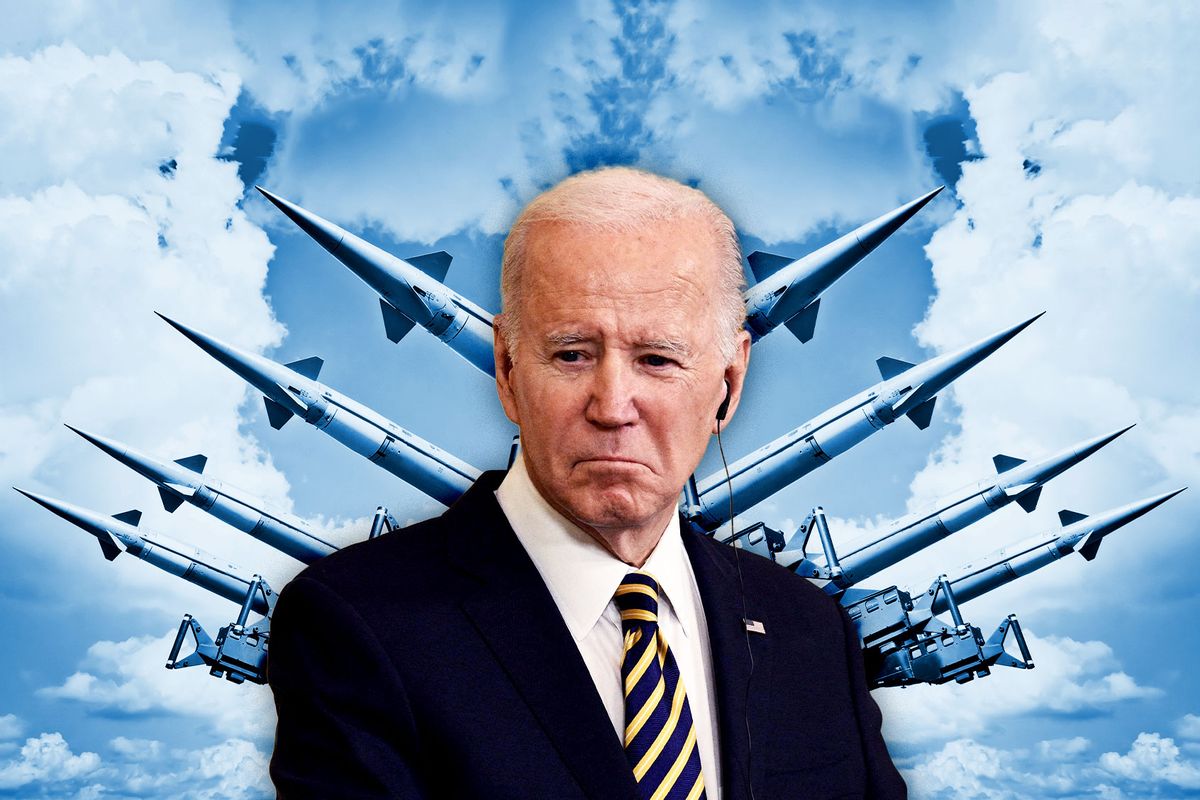 The Democrats position themselves as the party of virtue, cloaking their support for the war industry in moral language stretching back to Korea and Vietnam, when President Ngo Dinh Diem was as lionized as Ukrainian President Volodymyr Zelenskyy is now. All the wars they support and fund are "good" wars. All the enemies they fight, the latest being Russia's Vladimir Putin and China's Xi Jinping, are incarnations of evil. The photo of a beaming Speaker Nancy Pelosi and Vice President Kamala Harris holding up a signed Ukrainian battle flag behind Zelenskyy as he addressed Congress was another example of the Democratic Party's abject subservience to the war machine.

The Democrats, especially with the presidency of Bill Clinton, became shills not only for corporate America but for the weapons manufacturers and the Pentagon. No weapons system is too costly. No war, no matter how disastrous, goes unfunded. No military budget is too big, including the $858 billion in military spending allocated for the current fiscal year, an increase of $45 billion above what the Biden administration requested.

The historian Arnold Toynbee cited unchecked militarism as the fatal disease of empires, arguing that they ultimately commit suicide.

There once was a wing of the Democratic Party that questioned and stood up to the war industry: Senators like J. William Fulbright, George McGovern, Gene McCarthy, Mike Gravel and William Proxmire and House members like Dennis Kucinich. But that opposition evaporated along with the antiwar movement. When 30 members of the Congressional Progressive Caucus recently issued a call for Biden to negotiate with Putin, they were forced by the party leadership and a warmongering media to back down and rescind their letter. Not that any of them, with the exception of Rep. Alexandria Ocasio-Cortez of New York, have voted against the billions of dollars in weaponry sent to Ukraine or the bloated military budget. Rashida Tlaib of Michigan voted present.

Ukraine, media censorship and the ruthless politics of permanent war

The opposition to the perpetual funding of the war in Ukraine has come primarily from Republicans, 11 in the Senate and 57 in the House, several of whom, such as Rep. Marjorie Taylor Greene of Georgia, are unhinged conspiracy theorists. Only nine Republicans in the House joined the Democrats in supporting the $1.7 trillion spending bill needed to prevent the government from shutting down, which included approval of $847 billion for the military — the total is boosted to $858 billion when factoring in accounts that don't fall under the Armed Services committees' jurisdiction. In the Senate, 29 Republicans opposed the spending bill. The Democrats, including nearly all 100 members of the Progressive Caucus, lined up dutifully for endless war.

This lust for war is dangerous, pushing us into a potential war with Russia and, perhaps later, with China — each a nuclear power. It is also economically ruinous. The monopolization of capital by the military has driven U.S. debt to over $30 trillion, $6 trillion more than the U.S. GDP of $24 trillion. Servicing this debt costs $300 billion a year. We spend more on the military than the next nine countries combined, including China and Russia. Congress is also on track to provide an extra $21.7 billion to the Pentagon — above the already expanded annual budget — to resupply Ukraine.

"But those contracts are just the leading edge of what is shaping up to be a big new defense buildup," The New York Times reports. "Military spending next year is on track to reach its highest level in inflation-adjusted terms since the peaks in the costs of the Iraq and Afghanistan wars between 2008 and 2011, and the second highest in inflation-adjusted terms since World War II — a level that is more than the budgets for the next 10 largest cabinet agencies combined."

The Democratic Party, which under the Clinton administration aggressively courted corporate donors, has surrendered its willingness to challenge, however tepidly, the war industry.

"As soon as the Democratic Party made a determination, it could have been 35 or 40 years ago, that they were going to take corporate contributions, that wiped out any distinction between the two parties," Dennis Kucinich said when I interviewed him on my show for The Real News Network. "Because in Washington, he or she who pays the piper plays the tune. That's what's happened. There isn't that much of a difference in terms of the two parties when it comes to war."

In his 1970 book "The Pentagon Propaganda Machine," Fulbright describes how the Pentagon and the arms industry pour millions into shaping public opinion through public relations campaigns, Defense Department films, control over Hollywood and domination of the commercial media. Military analysts on cable news are universally former military and intelligence officials who sit on boards or work as consultants to defense industries, a fact they rarely disclose to the public. Barry R. McCaffrey, a retired four-star army general and military analyst for NBC News, was also an employee of Defense Solutions, a military sales and project management firm. He, like most of these shills for war, personally profited from the sales of the weapons systems and expansion of the wars in Iraq and Afghanistan.

On the eve of every congressional vote on the Pentagon budget, lobbyists from businesses tied to the war industry meet with Congress members and their staff to push them to vote for the budget to protect jobs in their district or state. This pressure, coupled with the mantra amplified by the media that opposition to profligate war funding is unpatriotic, keeps elected officials in bondage. These politicians also depend on the lavish donations from the weapons manufacturers to fund their campaigns.

Seymour Melman, in his book "Pentagon Capitalism," documented the way militarized societies destroy their domestic economies. Billions are spent on the research and development of weapons systems while renewable energy technologies languish. Universities are flooded with military-related grants while they struggle to find money for environmental studies and the humanities. Bridges, roads, levees, rail, ports, electric grids, sewage treatment plants and drinking water infrastructures are structurally deficient and antiquated. Schools are in disrepair and lack sufficient teachers and staff. Unable to stem the COVID-19 pandemic, the for-profit health care industry forces families, including those with insurance, into bankruptcy. Domestic manufacturing, especially with the offshoring of jobs to China, Vietnam, Mexico and other nations, collapses. Families are drowning in personal debt, with 63 percent of Americans living paycheck to paycheck. The poor, the mentally ill, the sick and the unemployed are abandoned.

Melman, who coined the term "permanent war economy," noted that since the end of the Second World War, the federal government has spent more than half its discretionary budget on past, current and future military operations. It is the largest single sustaining activity of the government. The military-industrial establishment is nothing more than gilded corporate welfare. Military systems are sold before they are produced. Military industries are permitted to charge the federal government for huge cost overruns. Massive profits are guaranteed. For example, this November, the Army awarded Raytheon Technologies alone more than $2 billion in contracts, on top of over $190 million awarded in August, to deliver missile systems to expand or replenish weapons sent to Ukraine. Despite a depressed market formost other businesses, stock prices of Lockheed and Northrop Grumman have risen by more than 36 and 50 percent this year.

Tech giants, including Amazon, which supplies surveillance and facial recognition software to the police and FBI, have been absorbed into the permanent war economy. Amazon, Google, Microsoft and Oracle were awarded multibillion-dollar cloud computing contracts for the Joint Warfighting Cloud Capability and are eligible to receive $9 billion in Pentagon contracts to provide the military with "globally available cloud services across all security domains and classification levels, from the strategic level to the tactical edge," through mid-2028.

Foreign aid is given to countries such as Israel, with more than $150 billion in bilateral assistance since its founding in 1948, or Egypt, which has received over $80 billion since 1978 — aid that requires foreign governments to buy weapons systems from the U.S. The U.S. public funds the research, development and building of weapons systems and purchases them for foreign governments. Such a  circular system mocks the idea of a free-market economy. These weapons soon become obsolete and are replaced by updated and usually more costly weapons systems. It is, in economic terms, a dead end. It sustains nothing but the permanent war economy.

"The truth of the matter is that we're in a heavily militarized society driven by greed, lust for profit, and wars are being created just to keep fueling that," Kucinich told me.

In 2014, the U.S. backed a coup in Ukraine that installed a government that included neo-Nazis and was antagonistic to Russia. The coup triggered a civil war when the ethnic Russians in eastern Ukraine, the Donbas region, sought to secede, resulting in over 14,000 people dead and nearly 150,000 displaced, before Russia invaded in February. The Russian invasion of Ukraine, according to Jacques Baud, a former NATO security adviser who also worked for Swiss intelligence, was instigated by the escalation of Ukraine's war on the Donbas. It also followed the Biden administration's rejection of proposals sent by the Kremlin in late 2021, which might have averted Russia's invasion the following year.

This invasion has led to widespread U.S. and EU sanctions on Russia, which have boomeranged onto Europe. Inflation ravages Europe with the sharp curtailment of shipments of Russian oil and gas. Industry, especially in Germany, is crippled. In most of Europe, it is a winter of shortages, spiraling prices and misery.

"This whole thing is blowing up in the face of the West," Kucinich warned. "We forced Russia to pivot to Asia, as well as Brazil, India, China, South Africa and Saudi Arabia. There's a whole new world being formed. The catalyst of it is the misjudgment that occurred about Ukraine and the effort to try to control Ukraine in 2014 that most people aren't aware of."

By not opposing a Democratic Party whose primary business is war, liberals become the sterile, defeated dreamers in Fyodor Dostoevsky's "Notes from the Underground."

A former convict, Dostoevsky did not fear evil. He feared a society that no longer had the moral fortitude to confront evil. And war, to steal a line from my latest book, is the greatest evil.

more from Chris Hedges on the true cost of war

Chris Hedges is the former Middle East bureau chief of the New York Times, a Pulitzer Prize winner and a columnist at ScheerPost. He is the author of several books, including "America: The Farewell Tour," "American Fascists: The Christian Right and the War on America" and "War Is a Force That Gives Us Meaning." He previously worked overseas for the Dallas Morning News, the Christian Science Monitor and NPR, and hosted the Emmy-nominated RT America show "On Contact."