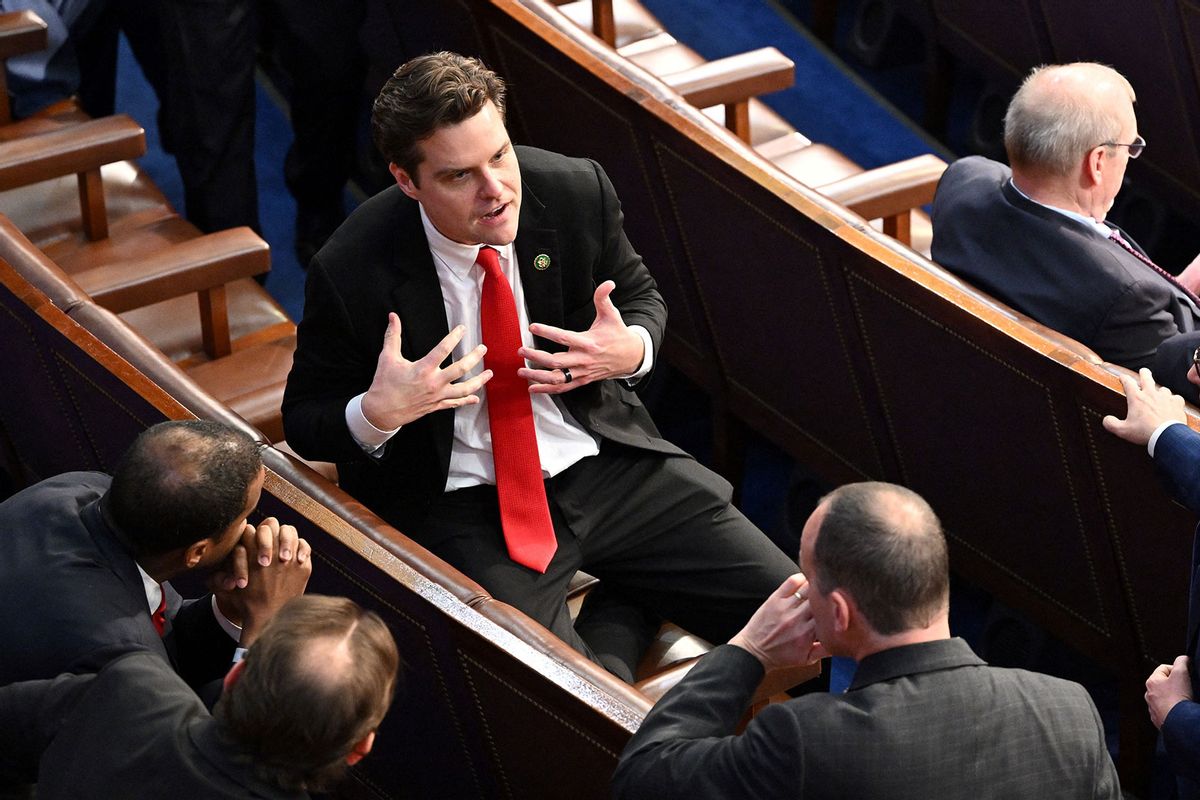 US Republican Representative from Florida Matt Gaetz speaks with lawmakers as the US House of Representatives convenes for the 118th Congress at the US Capitol in Washington, DC, January 3, 2023. (MANDEL NGAN/AFP via Getty Images)
--

Editors note: This article has been updated to reflect Gaetz's caucus membership.

After McCarthy failed to secure enough party support during the first round of votes Tuesday, Gaetz loudly endorsed Freedom Caucus member Rep. Jim Jordan, R-Ohio, for House Speaker. Despite previously making significant concessions to the GOP's pro-Trump faction in a proposed House Rules package, McCarthy struggled to win over a significant chunk of the Freedom Caucus.

Earlier in the day, NBC's Hayley Talbot posted a video to Twitter showing staff prematurely moving what appeared to be McCarthy's belongings into the speaker's suite in the Capitol.

McCarthy went on to suffer a historically humiliating defeat in three rounds of votes before the House adjourned, leaving the speaker's chair empty but vowing to press on for a fourth vote.

He then retreated behind closed doors – a little red pizza wagon following fast on his heels.

By 10 p.m., Gaetz had replied with his own bit of pageantry on Twitter, pointing out in a letter to Capitol Architect J. Brett Blanton that McCarthy had moved his staff into – or "occupied," as Gaetz put it – the House speaker's suite prematurely.

"How long will he remain there before he is considered a squatter?" Gaetz clucked in the letter.

McCarthy managed to get just 203 of the necessary 218 votes in the first two rounds of voting on Tuesday, and only 202 in the third and final round of the night after Rep. Byron Donalds, R-Fla., joined the holdout group. Seemingly exhausted and calling for conference, House GOP members retired from the chamber.

The House GOP is expected to hold a fourth round of votes Wednesday. McCarthy will need to claw back several of the 20 GOP votes he lost during Tuesday's three rounds. He can only nab the speakership if he loses four or fewer Republican votes, or if Democrats – all 212 of whom thrice voted for Rep. Hakeem Jeffries, D-N.Y. – lend him a hand by voting for McCarthy in round four.

Despite some public eyebrow-raising over McCarthy and Gaetz bickering, the two men's ongoing verbal slap-fight comes as a surprise to few in the Capitol. In the days preceding the vote, heightened tensions between the Freedom Caucus and the broader GOP grew obvious and reportedly culminated in a closed-door, intra-party shouting match.

As the House GOP's second-in-command, Louisiana Republican Rep. Steve Scalise, put it Tuesday night: "Everybody knew this would be going on and we're going to work through it."