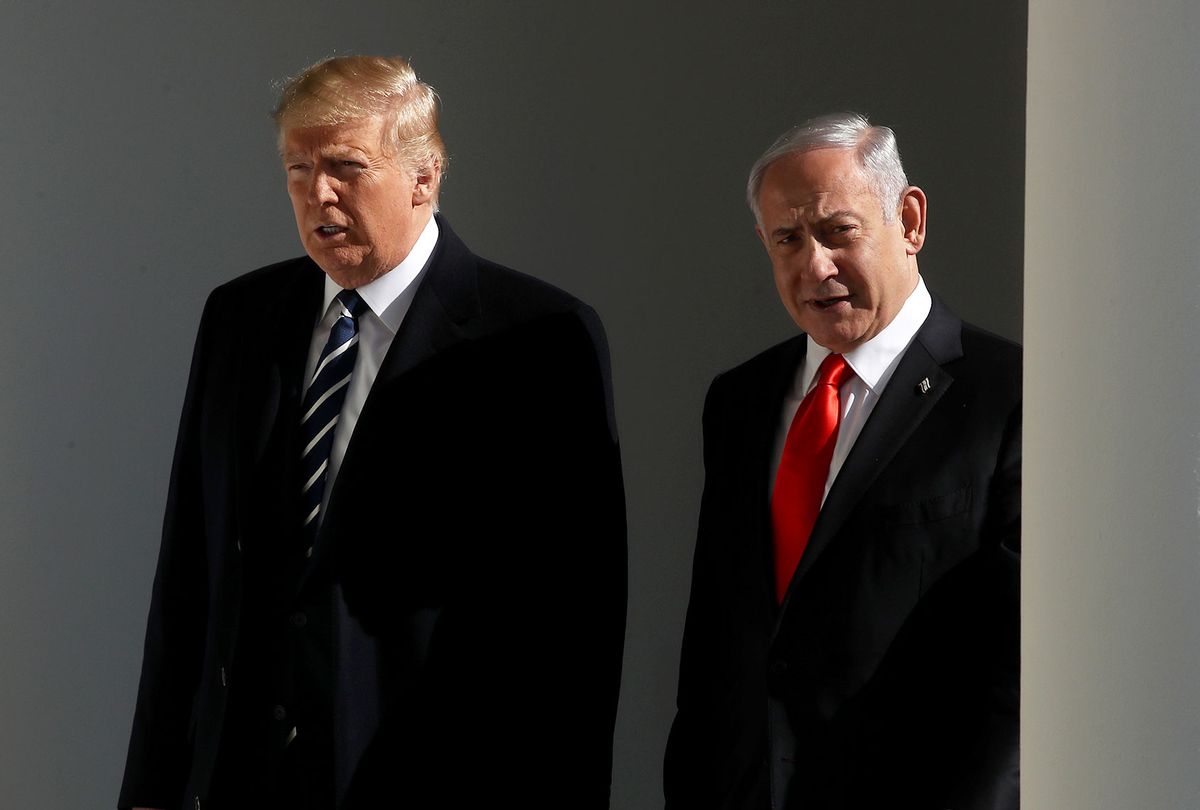 Democracy is not just about holding elections. It is a set of institutions, ideas and practices that allow citizens a continuous, decisive voice in shaping their government and its policies.

The new Israeli government, headed by Benjamin Netanyahu and sworn in on Dec. 29, 2022, is a coalition of the most extreme right-wing and religious parties in the history of the state. This government presents a major threat to Israeli democracy, and it does so on multiple fronts.

Here are the four ways that Israel's democratic institutions, customs and practices are endangered by the new government, based on policies and legislation that might be enacted or that are already in process.

1. Hostility to freedom of speech and dissent

Prime Minister Netanyahu has been working for years to consolidate his grip on Israeli media. The new government plans to accelerate the privatization of media in the hands of friendly interests and brand as anti-Israeli and treasonous media outlets its leaders deem hostile. The signs of this delegitimization are already here. 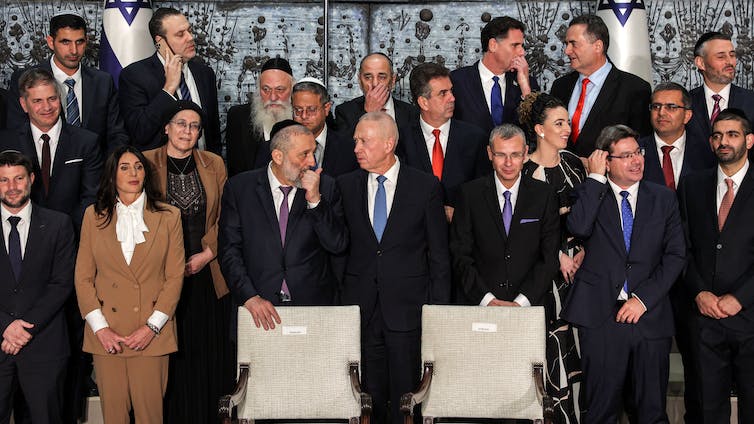 Ministers of Israel's 37th government wait to have their group picture taken with the president and prime minister at the president's residence in Jerusalem on Dec. 29, 2022. Photo by Gil Cohen-Magen/AFP via Getty Images

Even before the newly appointed minister of national security, Itamar Ben-Gvir, took office, the police briefly arrested and interrogated journalist Israel Frey after he posted a controversial tweet hinting that the Israeli military may be a legitimate target of Palestinian attacks. The police claimed the tweet incited terrorism, and the arrest showed journalists who favor an open and free press that they might face retaliation.

Ben-Gvir, the head of the Jewish Power party and now overseer of the police, was convicted in the past for supporting Jewish terrorism and for racist incitement against Israel's Arab minority. In his inauguration speech on Jan. 1, the new minister branded "Jewish anarchists" – a code he often uses for leftists and human rights organizations – as threats that "needed to be dealt with."

The Netanyahu government appears poised to allow discrimination against the LGBTQ community and women, thus undermining equality before the law, an important democratic principle.

Incoming National Missions Minister Orit Strock said in an interview in late December, "If a doctor is asked to give any type of treatment to someone that violates his religious faith, if there is another doctor who can do it, then you can't force them to provide treatment."

Netanyahu condemned Strock and other coalition members who stated that gay people could be denied service by businesses if serving them contradicts the business owner's religious beliefs. Yet, journalists report that Likud and other coalition partners agreed in writing to amend the law against discrimination to allow exactly such a policy.

During early coalition negotiations, ultra-Orthodox parties demanded new legislation that would allow gender-based segregation in public spaces and events. Netanyahu has reportedly agreed, which means these laws are expected to pass the Knesset. Segregation in educational spheres, public transportation and public events is often translated into exclusion of women and weakening of women's voices, and hence contradicts basic democratic principles such as freedom and equality.

The new government's intention to de facto annex the West Bank will turn hollow Israel's claims of being the only democracy in the Middle East.

In a Dec. 28 tweet, Netanyahu announced that his government's guidelines will include the principle that "the Jewish people have an exclusive and unquestionable right to all areas of the Land of Israel," including the West Bank, occupied by Israel since 1967 and populated by a Palestinian majority.

These guidelines, combined with new nominations of far right politician Bezalel Smotrich as the minister responsible for Jewish settlements and Ben-Gvir as the minister in charge of the border police, could provide justification for annexation of the occupied Palestinian territories.

Based on much of the rhetoric of right-wing leaders such as Smotrich, Palestinian residents of these lands will have neither equal rights nor voting rights. This means apartheid, not democracy.

4. Erasing the separation of powers

In the Israeli system, the executive and legislative branches are always controlled by the same coalition. The courts are the only institution that can check the power of the ruling parties and uphold the country's Basic Laws, which provide rights in the absence of a formal constitution.

But the new government wants to erase this separation of power and explicitly aims at weakening the courts. On Jan. 4, after less than a week in his role, new Minister of Justice Yariv Levin announced the government's plan for a radical judicial reform, which will include the "override clause." That clause will allow a simple majority in the Knesset to re-enact any law struck down by the Supreme Court as unconstitutional. 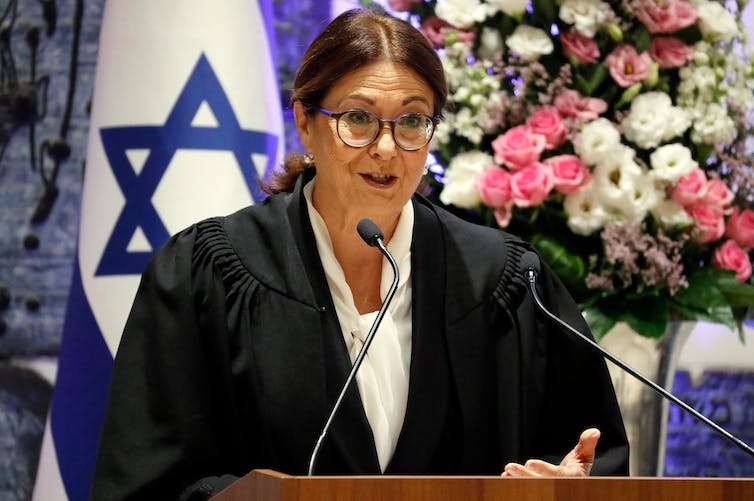 The new Israeli government plans to allow a simple majority in the Knesset to ignore any action by the Supreme Court to strike down a law as unconstitutional. Esther Hayut, pictured here, is the chief justice of the Supreme Court. Thomas Coex/AFP via Getty Images

This would, in effect, remove all barriers placed upon the power of the majority. The coalition could legislate policies that are not only unconstitutional, but which clearly contradict ideas of human rights and equality that are enshrined in Israel's Declaration of Independence.

The government's plan also includes reforms that would allow the coalition to control nomination of judges. In a small country that does not have a strong constitution and in which there is no separation of power between the executive and legislature, this move, again, would weaken the authority of the court and make judges beholden to politicians.

These so-called reforms "threaten to destroy the entire constitutional structure of the State of Israel," said Yair Lapid, head of the opposition and former prime minister.

The danger of Netanyahu's woes

All of these threats to Israeli democracy are more likely to materialize because of Netanyahu's current personal problems.

Netanyahu is an experienced politician who in the past managed to quell the most extreme elements of his coalition partners, and his own Likud party, by paying them lip service while being more cautious on actual policies.

Many analysts do not believe this time will be the same.

The prime minister is facing corruption and fraud trials in three separate cases and is focused on protecting himself through whatever legislative and executive power he can muster. Netanyahu is beholden to his coalition for this task, which makes him vulnerable to their ultra-Orthodox agenda and demands for laws to perpetuate Jewish supremacy.

Any one of these changes present a serious democratic erosion. Together, they pose a clear danger to the existence of Israeli democracy.

Israel will continue to have elections in the future, but it's an open question whether these will still be free and fair. With no judicial oversight, with constant disregard of human rights, with annexation of Palestinian lands and the disenfranchising of their people, and with a media that normalizes all of these processes, the answer is probably no.

As in Turkey, Hungary or even Russia, Israel could become a democracy in form only, devoid of all the ideas and institutions that underpin a government that is actually of the people and by the people.