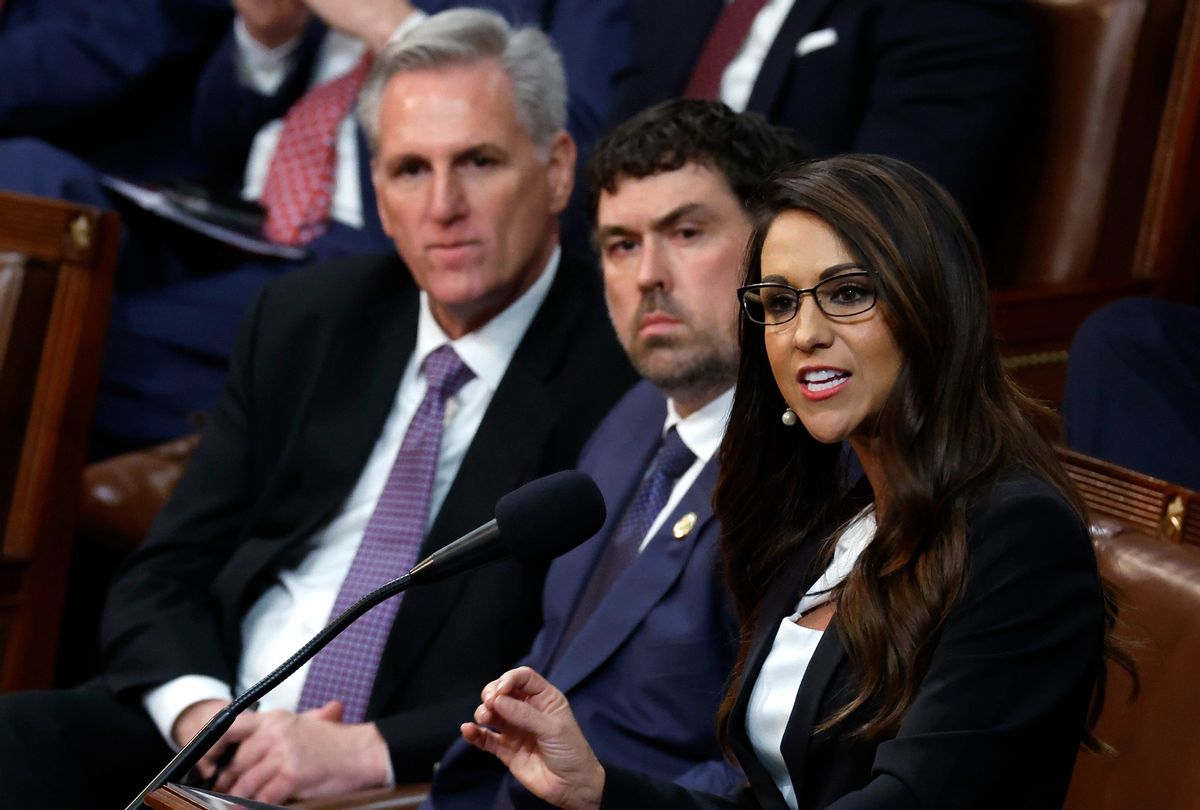 Rep.-elect Lauren Boebert (R-CO) (R) delivers remarks alongside House Republican Leader Kevin McCarthy (L) in the House Chamber during the second day of elections for Speaker of the House at the U.S. Capitol Building on January 04, 2023 in Washington, DC. (Chip Somodevilla/Getty Images)
--

Two years after a violent mob stormed the Capitol to try and disrupt the certification of the 2020 Presidential election, just twenty Republican House members have successfully stymied the swearing-in of the 118th Congress and the election of the Speaker of the House for four days with no sign of relenting.

The nation is at a standstill with the People's House stymied by narcissism.

This dysfunction should come as no surprise considering that 14 of the 15 members of the incumbents in the so-called Freedom Caucus voted not to certify the legitimate 2020 election results even after the Capitol was breached by rioters who physically attacked the police with fatal consequences for New Jersey native Capitol Police Officer Brian Sicknick who died of injuries sustained defending the U.S. Capitol.

On Jan. 6 President Biden will award the Presidential Citizens Medal, the nation's highest civilian honor posthumously to Officer Sicknick, whose estate has filed a wrongful death case against Donald Trump who summoned and dispatched the mob that stormed the Capitol.

Back in September, Julian Khater, pled guilty to assaulting Sicknick with a deadly weapon.  Months earlier his co-defendant in the attack, George Tanios pled guilty to a pair of misdemeanors. Hundreds of other rioters have been arrested with dozens tried and convicted for their role in the country's first violent insurrection that targeted the peaceful transition of power. Yet, there's been no accountability for the eight Republican U.S. Senators and the 139 members of the House, including New Jersey Rep. Jeff Van Drew, who even after the riot, voted to overturn the will of the voters at the behest of Donald Trump.

By choosing to walk through the trashed and blood-stained corridors of the Capitol to vote to upend the expressed will of the people after the tear gas cleared, they were validating the violent attack and a paralyzing politics of grievance they cynically use to raise campaign cash.

Almost a month before Trump's mob breached the Capitol and erected gallows, it should be noted that it was New Jersey Rep. Bill Pascrell who fully grasped the threat at hand.

On Dec. 11, 2020, Pascrell wrote Speaker Pelosi to point out that 126 House Republicans had signed on "a malignant lawsuit filed by the state of Texas against the states of Georgia, Michigan, Pennsylvania, and Wisconsin. This suit demands the will of the voters of these states be overturned and the Electoral College votes be stolen and awarded to Donald Trump."

Pascrell urged a close reading of the Constitution's 14th amendment, passed after the trauma of the Civil War which gave Congress the power to not seat members that "have engaged in insurrection or rebellion."

"Stated simply, men and women who would act to tear the United States government apart cannot serve as Members of the Congress," Pascrell wrote. "These lawsuits seeking to obliterate public confidence in our democratic system by invalidating the clear results of the 2020 presidential election attack the text and spirit of the Constitution, which each Member swears to support and defend, as well as violate the Rules of our House of Representatives, which explicitly forbid Members from committing unbecoming acts that reflect poorly on our chamber."

Pascrell continued. "Consequently, I call on you to exercise the power of your offices to evaluate steps you can take to address these constitutional violations this Congress and, if possible, refuse to seat in the 117th Congress any Members-elect seeking to make Donald Trump an unelected dictator."

The reality is the insurrection has really been ongoing in a sense for as long as the political architects of the attempted coup have eluded accountability and are poised to take back control of the very chamber their minions desecrated.

"If there's a real emergency, we couldn't respond," Representative Jerrold Nadler, D-N.Y., told the New York Times. "Either the Republicans don't understand that, or they do understand that, and they don't care. I don't know which is worse, but it is a profound danger to the country as long as it lasts."