Richard Avedon, Truman Capote and the brutality of photography

Being the subject of Avedon's photographic scrutiny could be uncomfortable, especially if you've visibly aged 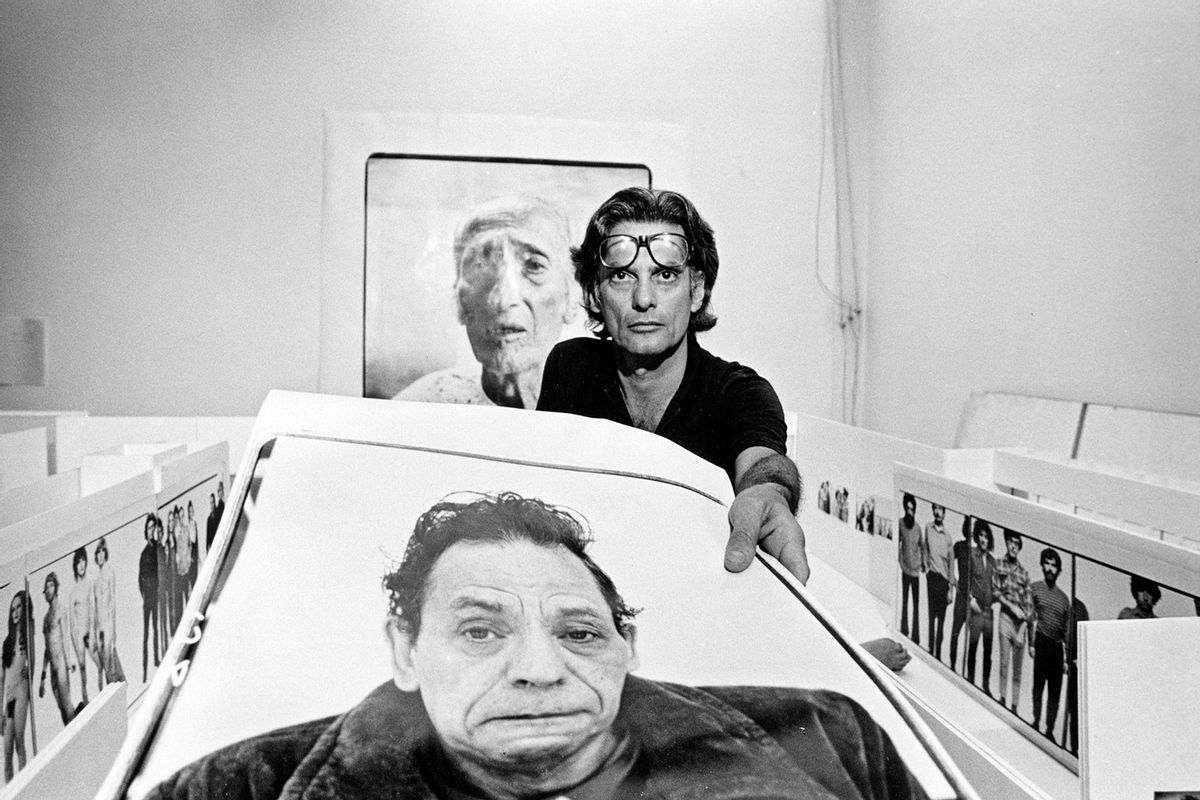 What obligation does a portrait photographer have to their subject? Is it their duty to cast that person in the best light, or the most revealing light?

As chief curator at the University of Arizona's Center for Creative Photography, I have worked with the images of fashion and portrait photographer Richard Avedon on a handful of occasions during my 16-year tenure. I curated my first exhibition of his work in 2007. The most recent show, "Richard Avedon: Relationships," is now being exhibited in Milan.

Avedon's portraits include so many rich details that they can feel more revealing than seeing someone in person. In his photographs, gesture, expression, clothing and facial features all convey information about the subject – their eyebrow hairs, wrinkles, makeup application, teeth and gaze all tell a story. The highly detailed pictures are an invitation to scrutinize the photograph and, of course, the person Avedon reveals.

One of his subjects, the writer Truman Capote, became a collaborator and friend. Avedon made a radically different pair of portraits of Capote: the earlier in 1955, when both men were in their early 30s, and a later one in 1974 when the two were in midlife.

The two images, which are on display in Milan side by side, show Avedon's relentless scrutiny. One highlights Capote's youth and sensuality. In the later picture, the writer's hard-lived years weigh on his face and suggest that age has dulled him.

Avedon, who was born in 1923 and died in 2004, began his career in the 1940s as a staff photographer for Harper's Bazaar. His fashion photographs staged glamorous models donning the latest fashions and living it up in exotic Parisian locales. His studio portraits shimmered with elegance and, through a lighting technique he developed that he dubbed the "beauty light," Avedon mesmerized the magazine's readers.

Avedon first photographed Capote in a solo portrait in 1955, when the writer was just 31 years old. At the time, Capote was a rising literary star. His 1948 novel, "Other Voices, Other Rooms," had been published when the author was just 24, and was met with critical acclaim and controversy for its openly gay protagonist.

The two were part of the New York art and culture scene and shared a number of friends and acquaintances. Avedon's picture features the young man, his torso unclothed, eyes closed, arms back, and chin raised.

The photographer's choice of a pose underscores the vulnerability of the young Capote. Capote's face is relaxed and conveys no expression; since his eyes are shut, viewers are able to observe him even as he doesn't return their gaze. Avedon placed Capote in front of a light-colored backdrop, and the wide margin of space around Capote sets him apart from the world, offering a pure and guileless figure.

In 1959, Avedon and Capote collaborated on a book, "Observations," which included a range of Avedon's portraits and a running narrative from Capote. The writer also appears, suspender-clad, toward the end of the volume, in a portrait by Avedon that has none of the transcendental qualities of the earlier 1955 picture.

Capote also wrote a three-page essay about Avedon for the opening of "Observations," praising the photographer for his clarity of vision, his prolific production and his expansive artistic influence.

A 1959 letter to Avedon, in which Capote refers to the photographer as "beloved collaborator," compliments the finished volume and lauds Avedon for "doing handsomely with our little tale." 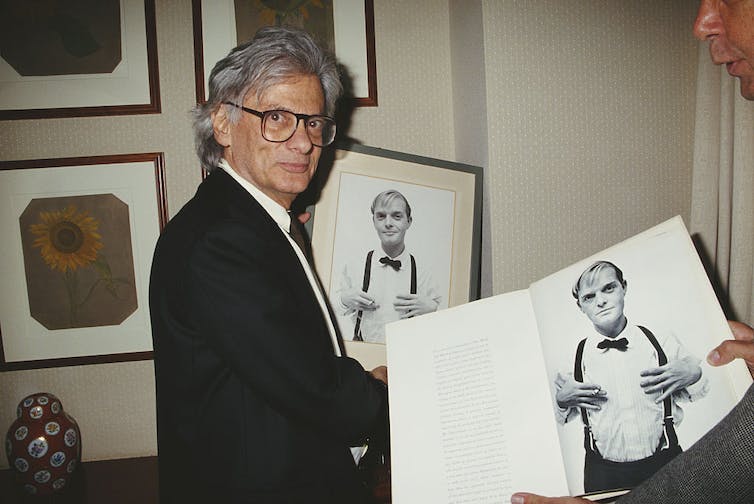 Richard Avedon poses with his 1959 portrait of Truman Capote at a tribute event for the deceased author in 1994. Rose Hartman/Getty Images

Then, in early 1960, Capote wrote to friends announcing he had just signed a contract for the book he had been researching. The true crime novel, "In Cold Blood," was about the brutal murder of the Clutter family in Holcomb, Kansas. In the letter, he mentioned that he intended to return to the Midwest with Avedon, whom he described as "quite easily the world's greatest photographer."

Avedon traveled to Kansas to visit Capote during his research and to photograph accused killers Perry Smith and Richard "Dick" Hickock. The unflinching portraits of the men, with their white backgrounds and rich detail, were typical of Avedon's style at the time. Dick Hickock's face appears damaged, but there's little to suggest that the subject, who appears defeated and vulnerable, could be capable of such unthinkable violence.

In his later years, Capote started dishing out literary menace, publishing stories in his unfinished novel "Answered Prayers" that exposed secrets of New York's high society. Chapters of the book-in-progress were printed in Esquire in the mid-1970s, which led to broken friendships and Capote's social isolation. His alcoholism and drug use were well known, and after an unproductive decade, Capote died of liver cancer at age 59 in 1984.

Avedon made his last portrait of Capote in 1974, when the writer was 50 years old. By that point, the two had maintained a relationship for nearly two decades. In this image, the lithe sensuality of the earlier portrait is gone. Avedon now focuses on Capote's head, which fills much of the frame.

Capote looks out from puffy eyes, his thinning hair retreating from his spotted forehead. The mind that produced some of 20th-century America's richest prose is there, but the face depicted is aged and damaged.

Capote reportedly complained about the 1974 portrait, calling it "very unflattering" and claiming he had been ill the day the picture was made.

Critics aimed at Avedon for unfairly wielding the power of his camera. As he shifted from a focus on early fashion works intended to celebrate fashion designers and sell clothes and magazines toward a focus on portraiture, his photography became more probing and revealing.

The term "cruel" has been used to describe some of Avedon's portraits, although the photographer pushed back on that charge.

By the late 1990s, the photographer saw the portraits as functioning as works of art, and this, he believed, relieved him from concern about the feelings of those pictured. In a 1999 interview with the San Francisco Chronicle, he said, "I've never thought of my pictures as cruel in any way, but as sort of beautiful. I really find great beauty in the sort of avalanche of flesh that happens to a face with age."

Certainly, being the subject of Avedon's photographic scrutiny could be uncomfortable. The detailed, relentless and permanent qualities of his black-and-white prints – especially in their largest sizes – could convey an honest brutality. When photographed by Avedon in 1976, then-U.S. Secretary of State Henry Kissinger is rumored to have said, "Be kind to me."

Back in his 1959 essay for "Observations," Capote acknowledged Avedon's attraction to – and prowess for – depicting the evidence of age.

"It will be noticed, for it isn't avoidable," Capote wrote, "how often he emphasizes the elderly; and, even among the just middle-aged, unrelentingly tracks down every hard-earned crow's foot."

Capote, himself of sharp wit and quick tongue, should have anticipated that he would one day be subjected to that same unrelenting eye.