"Don't be ugly": Marjorie Taylor Greene and Lauren Boebert get into loud argument in House restroom

The two MAGA lawmakers were "nearly in a screaming match" over Kevin McCarthy, The Daily Beast reports 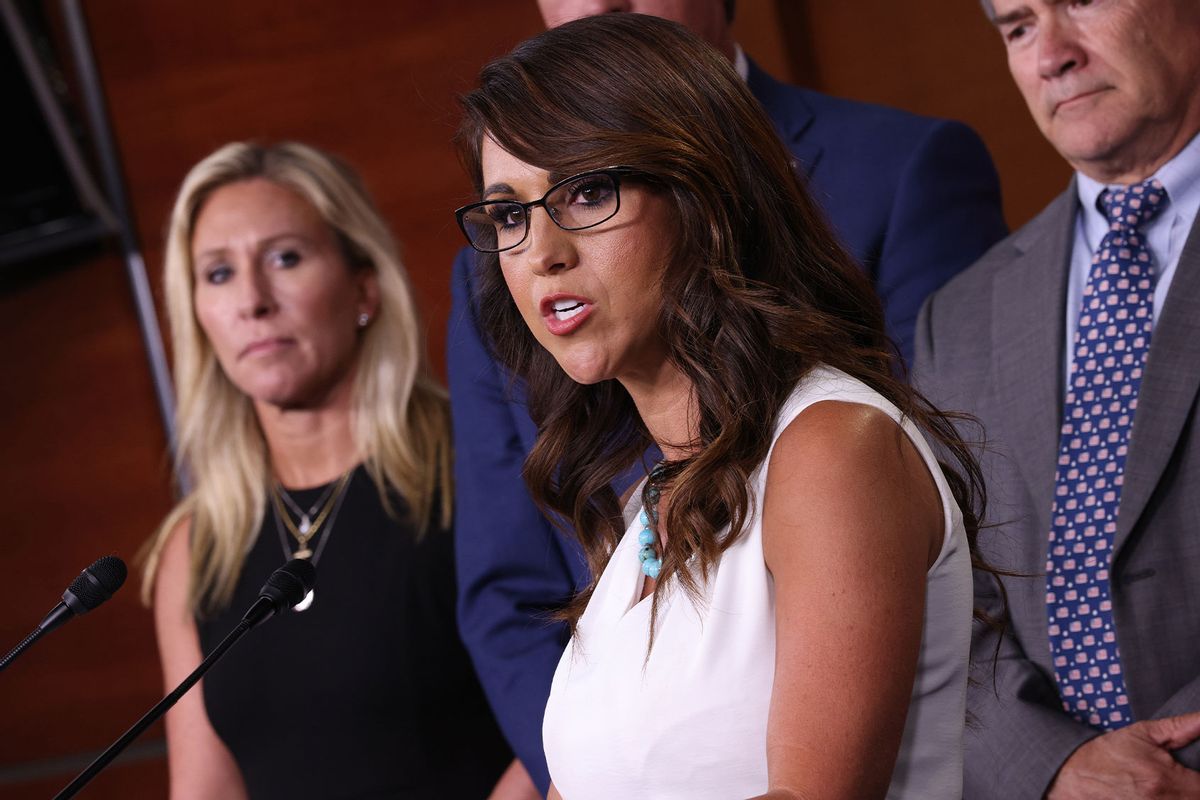 The mounting tension between Reps. Marjorie Taylor Greene, R-Ga, and Lauren Boebert, R-Colo., reached its boiling point when the pair got into a heated exchange in the women's bathroom during the House floor vote on January 3, according to The Daily Beast.

The two women were "nearly in a screaming match" over Rep. Kevin McCarthy's, R-Calif., candidacy for House speaker, multiple sources told The Beast.

One source said that Greene confronted Boebert as she came out of a bathroom stall.

Another source said that Greene asked Boebert, "You were OK taking millions of dollars from McCarthy but you refuse to vote for him for Speaker, Lauren?"

"That's when Lauren said, 'Don't be ugly,'" the first source said, adding that she "ran out like a little schoolgirl."

"She gladly takes our $$$": MTG and Lauren Boebert get into "high school drama" over Kevin McCarthy

While Greene has made an effort to cozy up to McCarthy, Boebert has remained a leading opponent of his candidacy and leaned into her MAGA firebrand status.

Their differing views were on display during the speaker vote, when the two weren't seated next to each other on the House floor as they had done so regularly before. Instead, Boebert sat in the middle section of the House chamber and Greene sat near the front of the chamber in a section of leadership loyalists.

Once McCarthy took the speaker's gavel after 15 rounds of voting and only after making sizable concessions to GOP hardliners, Greene grabbed a selfie with him to commemorate his victory.

The tension between Greene and Boebert has been brewing for some time.

The two had publicly feuded over McCarthy's bid for the House speakership, which Greene fervently backed. But their aversion to one another became more prominent after Boebert criticized the Georgia lawmaker in an interview with The Associated Press earlier this year.

"I have been asked to explain MTG's beliefs on Jewish space lasers, on why she showed up to a white supremacist conference. ... I'm just not going to go there," Boebert said. "She wants to say all these things and seem unhinged on Twitter, so be it."

The two Republicans have been on opposing sides of different issues, including lending aid to Ukraine, with Boebert introducing a House bill this past March calling for financial assistance to be sent to Ukraine and Greene opposing additional aid.

"We serve AMERICA NOT UKRAINE!" Greene tweeted earlier this year.

The lawmakers have also seemed to remain on opposite sides when it comes to showing their enthusiasm in backing Donald Trump's 2024 presidential campaign.

Greene has issued an early endorsement of the former president while Boebert has suggested she may be open to backing another candidate.

Their falling-out became more noticeable when the Colorado Republican didn't come to Greene's defense after she spoke at a conference hosted by the white nationalist Nicholas Fuentes.

"I do not apologize for other members and what they say or what they do, Boebert told Politico. "I do not support white supremacists, like Nick Fuentes, period."

The two also reportedly got into a confrontation so heated about Greene's attendance that they almost entered into a physical altercation at a House Freedom Caucus meeting.

The Republican lawmakers, who were often lumped together as prominent Trump supporters representing the right-wing faction of the party, are no longer a duo. Instead, Boebert detests being associated with Greene, according to reports.

In her interview with AP, Boebert said her "slim victory" has opened her eyes to "another chance to do everything that [she has] been promising to do."

She added, she hopes "to bring the temperature down, to bring unity."

about MTG and Lauren Boebert