Atmospheric greenhouse gases do not discriminate — but people do 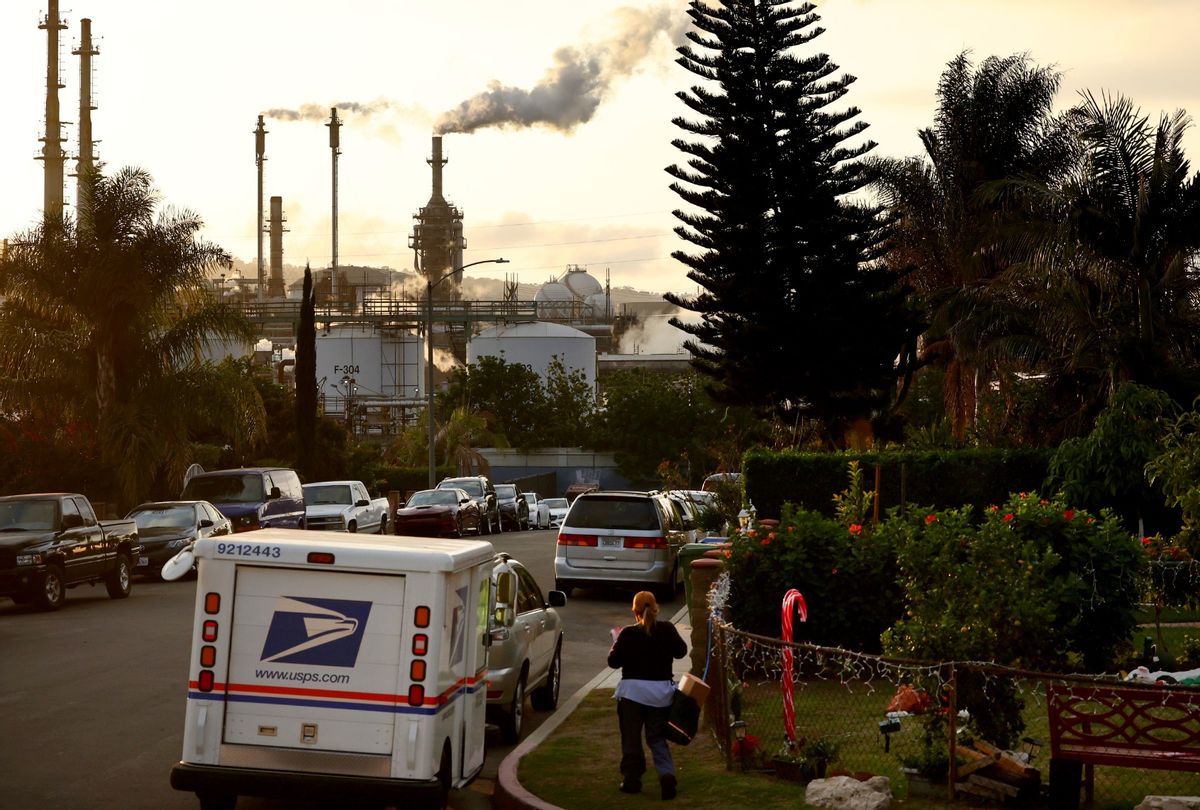 Not only does every good story begin with a question, but the first questions journalists are most likely to ask are often the same, and they start with one of two letters, a "W" and an "H."

But before we get started, let us first tip our hat to some accurate and apparently excellent science on the impacts of fossil-fuel generating greenhouse gases from ExxonMobil. The world's biggest investor-owned oil company predicted climate disruptions four decades ago — and then declined to share its findings with the public. Instead, as the company attacked climate science, climate disruptions proceeded largely as its researchers predicted. Now, though, the disruptions are outpacing even those predictions, partly because, well, Exxon kept them secret and pretended they did not exist.

So here goes with the where, who, what and how in this, the eighth year of the hottest eight years on record:

WHERE … is Santa Cruz, and what did its experience of the recent deluge tell us about how location makes the impacts of climate change uneven?

Extreme events offer a lesson in geography. Santa Cruz is a city of some 63,000 inhabitants on California's Central Coast, on the Monterey Bay. Even as the rest of California was getting hammered with torrential rain in the opening weeks of 2023, Santa Cruz got more, often as much as four times as much as San Francisco, on the same coast some 60 miles north. Why? Santa Cruz, and a string of neighboring seaside towns, exist within a specific set of physical conditions that make it a magnet for major devastation from the ever increasing intensity and duration of rainstorms, which scientists attribute to the effects of climate change. The city is nestled on the coast just below the Santa Cruz Mountains, which stop moisture from traveling further inland; atmospheric rivers flowing in from the ocean drop their rain in place. Those mountains are a bullseye for forest fires, which in 2020 and 2021 wiped out trees and underbrush that might have otherwise slowed and absorbed the recent rainfall. And a river that bisects the town is narrow, not nearly enough to absorb all the excess water. On the ocean side, roads and homes skirt the tops of precarious cliffs overlooking the churning sea. Result: Erosion defenses crumble as the waves crash higher and more violently from the west, and flood waters roll into town from the mountains to the east.

The details matter wherever you live. It could be the curve of a continental shelf, the slope of a mountain range, the impeded, or unimpeded, flow of a river, but every climate disaster has its specific set of conditions — which is why extreme events can be a lesson in geography. Santa Cruz is one city in one micro-climate in a state and a region with thousands of them. For journalists it is worth getting to know and report on those micro-climates,  because the climate vulnerabilities of every community, and their ability to respond, are defined by them. (Santa Cruz is relatively affluent; its ability to respond and rebuild is far more substantive than, say, that of nearby Salinas).

Such extreme events, wherever you are based, are coming at us with increasing frequency: In the United States, there have been 42 disasters each causing more than $1 billion in damage in just the past two years, 2021 and 2022, with the total for 2022 coming to $165 billion, according to Climate Central. From 1980 to 2020, the average occurrence of such disasters had been eight per year. Climate turbulence starts high in the atmosphere, where greenhouse gases do not discriminate, and then wreak their impact on Earth with violent inequality. It's why climate stories are not only a lesson in territorial geography, but in the geography of social and political power.

Which brings us to…

WHO…Lives Near an Oil Well?

Late last year, the California Independent Petroleum Association, a fossil fuel trade group, submitted almost a million signatures to put an initiative on the ballot to repeal a law that makes it more difficult to site an oil well near homes, schools or hospitals due to their release of highly toxic substances. County registrars are now counting the signatures, which appear to be sufficient to submit to California voters in 2024. Who would be most impacted by that repeal? In California, long among the top 10 oil producing states in the country, 2.7 million people live within 3,200 feet of an oil well; nearly 70% are people of color, according to FracTracker Alliance.

How many such facilities are there in the state? The California Air Resources Board lists the oil refineries that need to register their greenhouse gas emissions, , complete with addresses and production numbers, a handy guide for journalists,There is a high correlation between greenhouse gases from oil production and the presence of acute pollutants. And here's a list of the oil wells—which might require a data whiz, but gives an overall sense of how deeply entrenched oil exploration is in the state.

The ultimate danger that all those installations present is premature deaths: More than 8 million were associated with proximity to fossil fuel installations worldwide in 2018, according to recent research. In the U.S., many of those facilities — in California, Ohio, Pennsylvania, Texas and Louisiana, for example — are situated near what are often low income, majority-Black and brown communities.

This study identifies the quandary that many of those communities face as the facilities that poison them also provide employment — thus suggesting many stories to be done on the rising tensions as the slow but inexorable shift toward less fossil fuel intensive energy sources accelerates (at least in California). Nor do these facilities produce only petrochemical products to power your car. Many of them produce ingredients for what's even more common than gasoline: plastic, a fossil fuel product you can hold in your hand.

Which brings us to…

WHAT is the Link Between Yogurt and Climate Change?

According to a lawsuit filed by a coalition of consumer groups in France, Danone, the world's largest producer of yogurt, is not living up to the standards of a new law that requires large companies to reduce their environmental footprint. For the French-based company — with vast production capacities in the United States — that means reducing its use of plastic containers for its namesake yogurt, as well as numerous other consumer products including bottled water brands Volvic and Evian. In 2021, the company, according to its own annual report, used more than 750,000 metric tons of plastic containers for its products — the equivalent weight of 74 Eiffel Towers.

The plaintiffs in France, including the groups Surfrider Foundation Europe and ClientEarth, are demanding that the company do a complete inventory of its global plastic use and start immediately reducing its use of single-use plastics. If they succeed, the case may sound a warning shot to all plastic producers, which are tied inextricably to the petrochemical companies. Plastic also accounts for more than 4.5% of greenhouse gases.

Danone is one of the top 10 contributors to the waste stream of plastic — a list that includes other companies like Coca-Cola, PepsiCo and Nestlé. Which means that for journalists, the documents presented in this French case could offer valuable information on the plastic practices of not only Danone, but also other comparable consumer product companies that make heavy use of plastic. (Both Surfrider and ClientEarth offer English-language sites with background on the case).

As a global company, Danone could see major repercussions from the legal case in France for its operations in the United States and Canada, where it has offices and production facilities in New York, Colorado, Ohio, Virginia, Quebec and Ontario, among other places. Danone North America is certified as a B Corporation in this country, which means a heightened duty for the company, it proclaims, "to strengthen the role of business in driving social and environmental good for all."

At every stage of the production process, plastics are toxic. The proximity to those toxins is also a matter of one's placement in the geography determined by access to resources. In the United States, people who live within three miles of plastic manufacturing facilities, according to research by Beyond Plastic, "earn 28% less than the average American household and are 67% more likely to be people of color." More than 2,400 of the chemicals associated with plastic manufacturing are considered by the European Union to be "substances of potential concern" for human health. The EPA has been slow to regulate such substances, but in early 2023 the agency issued new guidelines that could open up new environmental justice angles for journalistic investigation. The agency declared that from this point on it would be addressing the "cumulative impact" of multiple chemical substances on human health — a significant departure from the agency's traditional focus on one chemical at a time. This change could have major implications for frontline communities routinely exposed to a cocktail of toxic substances.

Alert to Journalists: The major producers of plastic, including ExxonMobil, Shell and the Saudi company Sabic, are members of a group called the Alliance to End Plastic Waste, a coalition of companies to, as it states in its promotional material, "end plastic waste." Emails and corporate documents obtained by congressional investigators indicate that the rhetoric of the alliance and the actions of at least some of its individual corporate members are in direct contradiction to one another.

Which brings us to the question…

HOW can journalists counter misinformation and the "fossil fuel falsehoods," as a recent podcast put it?

Every situation is different, but it's a sign of how much climate change has hit the public radar that companies are positioning themselves to ride the rising concerns, or appear to be doing so.

Some quick references to help separate the wheat from the b.s., a list which I hope to be adding to as time goes on:

First off, follow Amy Westervelt (if you're not already), whose writing for The Intercept and her podcast, Drilled, offer eye opening glimpses into the inner workings of the fossil fuel companies and their attempts to manipulate public opinion, including children.

And here's a handy Disinformation Database from DeSmogBlog of some of the key figures and institutions behind the efforts to mislead the public on climate change.