"Mysticore" is the new norm: Inside the trend that's casting its spell over the culture

Magic, mysticism and the occult are moving into the mainstream. Is it just a fad or a sign of spiritual crisis? 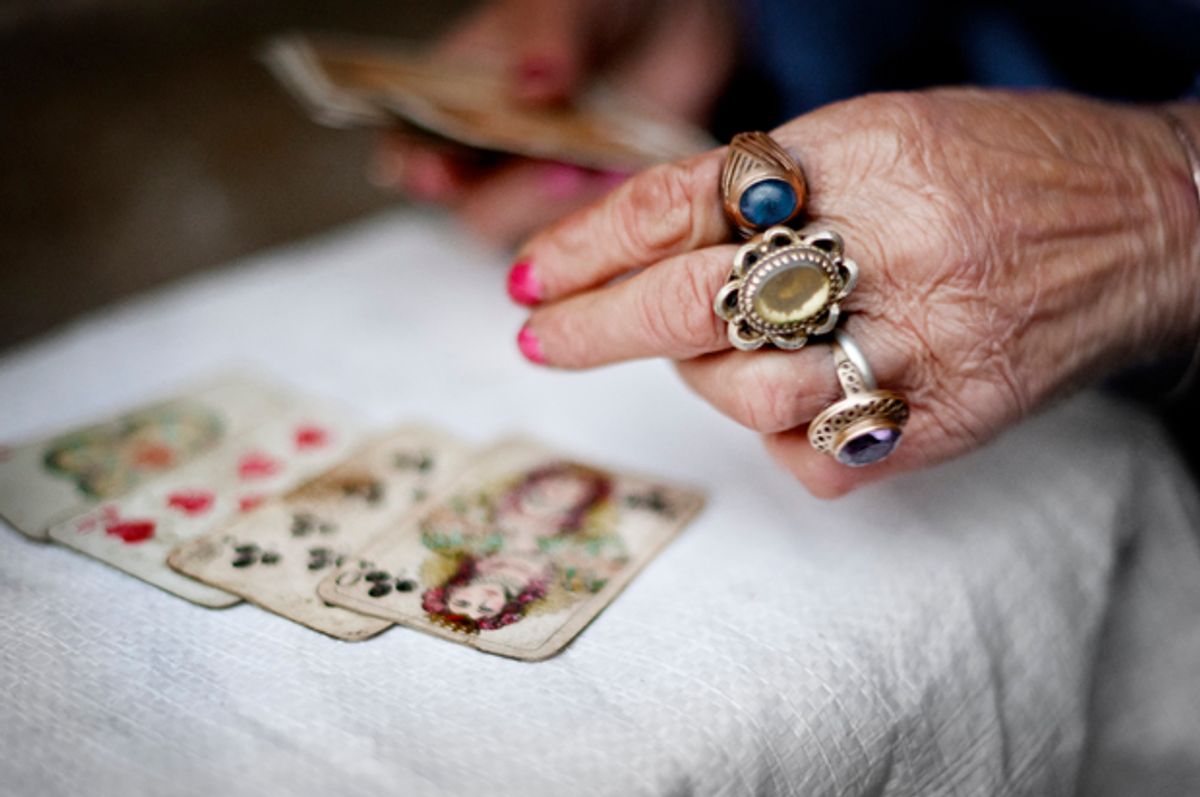 Welcome to the season of the witch. Recently, the Brooklyn Academy of Music hosted a Witches Brew film festival, which included the acclaimed new film “The Witch.” Lately it isn't uncommon to see glossy magazines like Nylon with headlines that start “The Witches' Guide to…”, while new publications like Sabat, an aesthetically driven magazine that explores contemporary witchcraft, are attracting attention from readers and design snobs alike.

Stores specializing in metaphysical sundries (think ritual candles, blended oils, sacred herbs) like Spellbound Sky and House of Intuition in Los Angeles, while not brand-new, are suddenly crowded. In Brooklyn, Witches of Bushwick has evolved from a venue on the underground party circuit to a social collective that celebrates witchcraft as a feminist art and collaborates with fashion companies like Chromat. Of course, for those who prefer whipping up potions at home, several new witch- and occult-themed subscription boxes deliver the magical arts to the doorstep.

Not just witches are enjoying a cultural renaissance, though. All manner of magic is in the air, as the New Age movement’s lighter granola-and-Zen fare has given way to the practice of a more modern mysticism, where conversations about conjuring, personal shamans and powerful potions can be intense as they are ubiquitous. While social media and feminism have brought witchcraft to the fore, the new kaleidoscopic array of spell casting, ritual observing (from pagan holidays to full moons) and crystal charging draws from traditional mysticism, magic and paganism. Served buffet style to an eager audience of open-minded converts, it’s shining a white light on everything from fashion and health to politics.

This may be the most prevalent, hidden-in-plain sight trend that you couldn’t quite put a finger on since “normcore.” Last fall the folks at trend-forecasting firm K-Hole — which coined the term “normcore” — looked into the cultural crystal ball to release a paper dubbed “A Report on Doubt.” Normcore, that infinitely hashtag-able trend that tapped into a “post-authenticity coolness that opts into sameness,” stood against style clichés and aggressive street-style peacocking — it promised freedom through assimilation. After an endless stream of articles about how wearing dad jeans was indeed the ultimate hipster power move, time had come for the cultural pendulum to swing. K-Hole’s new prediction was that logic and “sameness” were becoming relics and people were about to head into the mystic.

Call it post-reason or pro-intuition, this new phase rejects the positively beige normcore values in favor of highly personal, emotional responses to fashion, culture and politics. (Donald Trump’s rise certainly reads as more of a manifestation of personal desire than a reasonable course of action paved by logic and solid judgment.) Dubbing this new philosophy “Chaos Magic,” a term that's been bantered about in the postmodern Magick community for decades), K-Hole prophesied, “The fundamental element of magic is the ability to manifest or sublimate things."

Plus, K-Hole observed, "Chaos Magic lives in the same realm as the cult of positive thinking. But it goes beyond making mood boards of high end apartments you’d like to will into your possession. . . . You opt into whatever belief system you think will help you reach your intended goals.” Put simply, K-Hole’s version of Chaos Magic is the antidote to overthinking, a means of manifesting individual desires onto the universe — a “radical DIY.”

The report has been cited by Vogue, which found Chaos Magic in the personal imprints of designers like Nicolas Ghesquière (who penned a letter to accompany his debut Louis Vuitton show) and of Riccardo Tisci (who for Givenchy’s spring 2016 show brought in Marina Abramovic to craft a spiritual mood). Meanwhile, designer JW Anderson has evoked the trend more literally, sewing celestial symbols into his knitwear.

Check social media: A search for #witch on Instagram yields about 2,375,000 posts — whereas one for #kardashian scores only 1,630,000. Search next time at a boutique: Tarot decks are coming back in high style, thanks to retailers like the Wild Unknown — its artful cards are in stores across the country, from upscale meccas like ABC Home in New York City to indie hot spots like Skylark in Venice Beach, California. K-Hole was right, "mysticore" is the new norm.

But why? In an editorial earlier this year, N+1 recalled the postwar era’s suspicion of New Age thinking, heralded by Theodor Adorno’s criticism of horoscopes, based on his reading of the Los Angeles Times’ astrology column in 1952. In Adorno’s mind, astrology was a superstition that encouraged political passivity.

Maybe he was onto something. Consider the simple maxim: In uncertain times, people turn to religion to make sense of the world around them.

Today, however, as traditional Western religion loses some of its appeal (a recent Pew survey found that as of 2014, fewer adults, especially millennials, describe themselves as religiously affiliated), mysticism, witchcraft and magic are stepping in to fill the spiritual void.

“It correlates with nature, clean living movements, and earthy values,” said Elisabeth Krohn, Sabat’s founder and editor. “Whether you blame it on Trump, global capitalism or Internet culture, I feel many crave a less cynical world, something non-linear, even mystical.”

The current surge of mystical thought is also directly tied to the sense of personal empowerment that modern feminism works toward. “The witch as an icon is resonating right now because we've entered a fourth wave of feminism,” said Pam Grossman, author of What Is a Witch and co-founder of the Occult Humanities Conference at New York University. “We are redefining what power, leadership, beauty and value look like on our own terms. And the witch is the ultimate symbol of female power. Doing witchcraft is a way to connect to that energy, which is so needed right now, as we're beginning to collectively course correct thousands of years of sexism and oppression.”

A visit to the temple of Instagram (and Tumblr and Snapchat) makes it easy to see how mysticore appeals to the generation of internet autodidacts that grew up on Harry Potter. In social media, the idea of tapping into something ancient is suddenly accessible, personal and highly individualized, which is very much in line with the idea of Chaos Magic itself (even in its original, non-trend-spotting incarnation).

“I don't believe that those who dabble in mysticism because it's a trend or passing curiosity actually take anything away from more ‘serious’ practitioners,” Grossman said. “For some people, that tarot deck that they bought just might be the gateway to a road of deeper inquiry. Or it may be something they toss aside in a month. It doesn't hurt anyone in either case.”

Whether individuals are searching for obscure Aleister Crowley texts while planning an equinox ritual or just matching their nail color to the crystals the choose-your-own adventure nature of mysticore gives it a flexibility almost unmatched in the world of trends — except for maybe athleisure, which is flexible by nature. And for those looking for a place to start, the Hoodwitch’s Bri Luna, another Vogue favorite, recently collaborated on a nail-polish line with Floss Gloss.

Grossman, for one, doesn’t see mysticore going away anytime soon. “Magic is a shape-shifter,” she said. “It doesn't care what form it takes. It just wants to flow and be known.”