Lessons from the paperback revolution 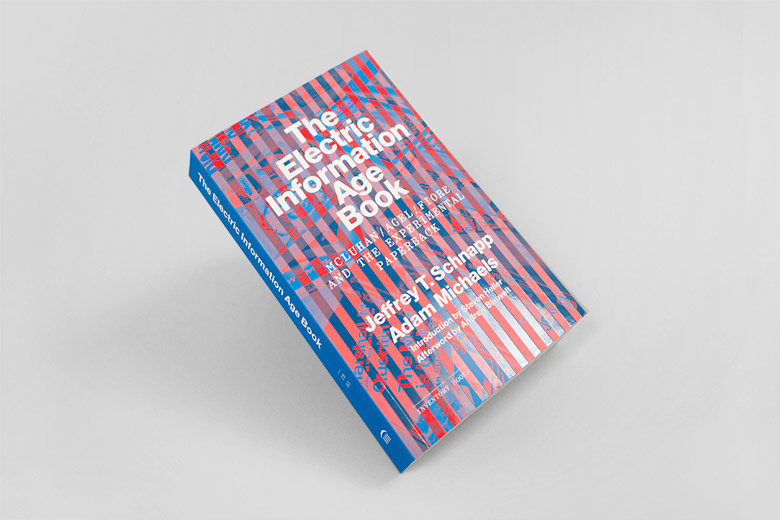 "The Electric Information Age Book," by Jeffrey Schnapp (the faculty director of Harvard's MetaLAB) and Adam Michaels (a co-founder of Project Projects), is the third installment in the “Inventory Books” series, which seeks “to advance the role of design as an integrated force in book editing and production ... as a means of revitalizing the space of the book to present critical content in an accessible, engaging format.” It’s surprising that this volume, subtitled “McLuhan/Agel/Fiore and the Experimental Paperback,” wasn’t the inaugural book of the series.

In 1964, Jerome Agel, public relations guru turned publisher and self-styled book producer and book packager, started his own publishing company with the intention of perfecting an already established publishing niche that fused high and low cultures in the form of mass-market paperback books. Bernard Geis, another packager in business at the same time as Agel, had found traction for celebrity books like Jacqueline Susann’s "Valley of the Dolls." Such books sold well so at the behest of the packagers, book publishing began to incorporate the tactics of product advertising “built on a revolution that had already begun transforming publishing into a modern industry in the 1930s.” Led by Doubleday and Pocket Books, publishers had already been involved with distributing paperbacks through mail-order subscriptions, house-owned bookstores, and magazine wholesalers able to put these books in non-traditional retail environments.

In the years leading up to the creation of Agel’s endeavor, plenty of publishers had also experimented with form and content, though none had reinvented the book for the 20th century’s accelerated media landscape where lines of definition were quickly eroding. Books like "Let Us Now Praise Famous Men" and "You Have Seen Their Faces" had ushered in the “documentary book,” collaborations between a writer and photographer of note, though the words and images were often treated “as separate realms, each with its distinctive dignity.”

Agel aimed to produce paperback books that best represented and conveyed the media realities of the era. The radical use of text, typography and illustrations challenged the traditional expectations of how the pages of a book could be presented to readers. The opportunity that Agel recognized was in how media culture, as mediated through the popularity of film and television, could be explored, employed and exploited to make an event of a newly published book, turning it into a media spectacle. While the commercial crassness of his endeavor is poignantly emblematic it was not the driving factor. Agel and his partner in crime, the designer Quentin Fiore, wanted to harness their contemporary media environment in the name of creating books that kept pace with the electric information age in a manner akin to the lofty ideas of poet Stéphane Mallarmé and theorist László Moholy-Nagy. Schnapp and Michaels write of how Mallarmé’s essay “The Book, A Spiritual Instrument” “dreamed of the entire universe flowing into a single total book: a book, both material and metaphysical, in time and outside time, that would fulfill and transcend the revolution inaugurated by Johannes Gutenberg.” The authors paraphrase Moholy-Nagy’s Bauhaus ideal of the book as “an exploded, porous book whose every page could become an all-comprehending theater of the present and a staging ground for ever-surprising futures.”

As the popularity of paperbacks rose, according to Schnapp and Michaels, “the paperback revolution narrowed the gulf between publishing and contemporary media culture.” Geis carved out $100,000 publicity budgets for these paperbacks; "The Voyeur," a tawdry novel, received a Times Square billboard and peep show installations in Grand Central and Penn Station. Even Marshall McLuhan chimed in on the paperback in "Understanding Media," writing, “The paperback itself has become a vast mosaic world in depth, expressive of the changed sense-life of Americans, for whom depth experience in words, as in physics, has become entirely acceptable, and even sought after.”

McLuhan needed no convincing when Agel approached him about a book of McLuhan’s ideas that relied on “the use of pictorial materials to engage younger audiences,” which would become "The Medium Is the Massage." In New York, Fiore joined the two for dinner and soon after Agel had a deal with McLuhan, whose role in the book’s production was little more than commenting on drafts and approving the final spreads. Blurring the lines between author, editor and designer, Agel and Fiore worked like movie producers, selecting McLuhan’s pluckiest adages from already published books, working them over typographically and pairing them with images of their choosing. Schnapp and Michaels identify how in the frenetic sequencing of text and imagery, “Fiore provides an overall mapping of how the human sensorium is stretched, stressed, and shaped by the new age.”

Agel also used his cinematic flair to promote the book: “Long before [it] had a working title, let alone existed in draft form, the marketing tools of the movie industry were mobilized to build the market,” through the use of enigmatic teaser ads run in various publications. In doing so, Agel made the best possible use of McLuhan’s ideas by putting them into practice in the media environment to which McLuhan was so acutely tuned. 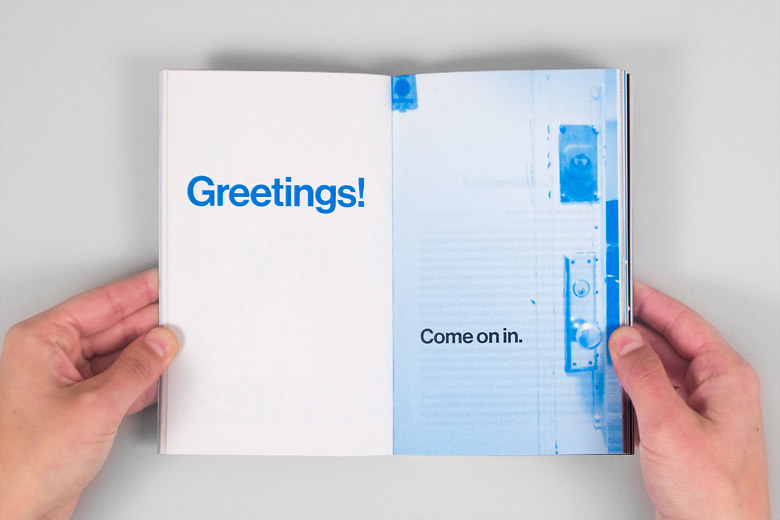 The making of "The Medium Is the Massage" serves as the core of "The Electric Information Age Book," but every page offers a fascinating behind-the-scenes look at how Agel and Fiore worked, with one another and with the likes of McLuhan, R. Buckminster Fuller, and Carl Sagan. Their first McLuhan book was such a hit that they couldn’t help but try to replicate this “pop typophotographic synthesis of the first order” again and again. While there were other successes, the two eventually parted ways to work independently and on very different sorts of projects.

Thanks to the scholarship of Schnapp and Michaels, it is impossible to dispute that the books produced by Agel and Fiore pushed the printed page to the limit, and in doing so helped bring crucial ideas about 20th century culture to an audience that might have otherwise remained oblivious. Think of them as precursors to Stephen Colbert and Jon Stewart’s campaign to inform Americans about super PACs. In both examples, the goal is “to entertain and to initiate a process of cognitive retooling.”

It is hard to imagine a traditional codex book, paperback or otherwise ever one-upping "The Medium Is the Massage" or R. Buckminster Fuller’s "I Seem to Be a Verb" in terms of the boundary-pushing union of text and image. "The Electric Information Age Book" recalls history, designed and illustrated to echo the books it so admires. Glints of the 21st century do appear, but only fleetingly. Andrew Blauvelt’s afterword glosses more recent attitudes and theories regarding the relationships between, and economies of, authorship, design and production. But for the most part, this book is very much rooted in the past. It is this historical vacuum that makes the book’s contemporary relevance that much more salient.

In a 1967 letter, McLuhan wrote, “Every new technology creates a new environment that alters the perceptual life of the entire population.” This is true. But why hasn’t this maxim found purchase in publishing today? The potential for e-books is staggering though that potential remains disappointingly unrealized. The presentation of content and the form of books, whether printed or digital, remain, for the most part, the same as ever. Social networking has reconfigured elements of promoting books to an extent, but no book trailer or Twitter trend has ever generated as much interest in a book as when this past October FSG paid for a Times Square billboard to promote Jeffery Eugenides’ "The Marriage Plot." 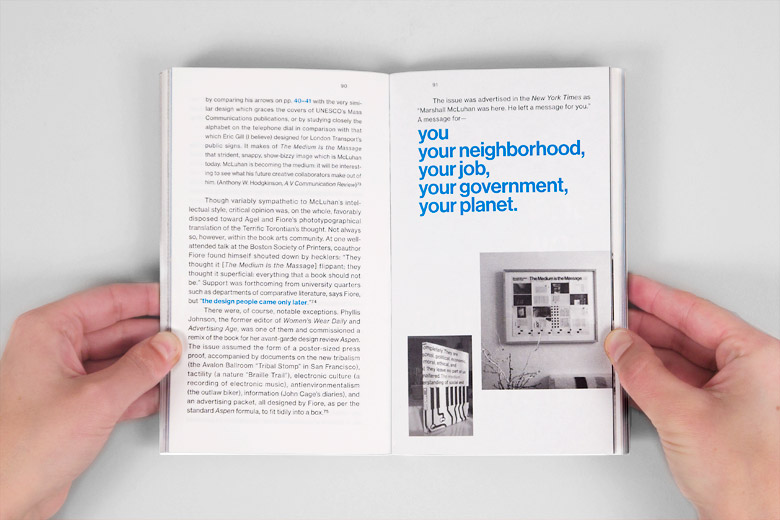 I can’t help but imagine how Agel and Fiore would go about packaging a book today. So much about culture has turned porous; surely the range of multimedia possibilities would excite them to no end, resulting in books as radical as the ones they produced over 40 years ago. Perhaps they would film a reality television show based on the production of a book, inviting viewers to vote on the book’s content, format, design, and title as an author, designer, and editor tried to work under such circumstances in a studio that also served as their living quarters?

Whatever the result of working with today’s tools, I’m sure they would not deviate from what had been their primary focus: the reader. Schnapp and Michaels locate the common ground all these experimental paperbacks share in how they empower readers: “Even if this book is ‘by’ a major thinker, you will fill in the blanks, you connect the dots, you navigate the book forward or backward to find the tasty tidbits; look for the patterns, ideas, and story line yourself.”

A great deal about what doesn’t work in publishing today, especially at the big houses, is that most of the people involved with producing books, whether they are destined for shelves or e-readers, do not concern themselves with readers. Bottom lines, sales histories, job security, marketing plans, and lack of time make readers a pretty low priority. Publishers want buyers, if they happen to actually read the book, that’s a bonus. As a result, readers are dictated to more than they are engaged.

"The Electric Information Age Book" compellingly tells the story of an important, albeit short, era in publishing when the insiders were the ones breaking down the walls and changing the rules as they went. As you sit with the ideas presented by Schnapp and Michaels, what history makes clear is how too many of today’s publishers are reluctant to champion books that “put themselves forward as alternatives to traditional books, faulted by their detractors for approaching today’s tasks with yesterday’s concepts and tools.”