William E. Leuchtenburg, is the William Rand Kenan, Jr. Professor Emeritus of History at the University of North Carolina, Chapel Hill. Over the course of six decades, he taught at Columbia University, UNC-Chapel Hill, and, as a visiting professor, at Harvard, Cornell, Duke, William and Mary and other American universities, as well as at Oxford where he held the Harmsworth chair. He served as presidential elections analyst for NBC and as presidential inauguration consultant for CBS, PBS, and C-SPAN. Elected president of the American Historical Association, the Organization of American Historians, and the Society of American Historians, he is the first recipient of the Arthur M. Schlesinger, Jr. Award for Distinguished Writing in American History of Enduring Public Significance. He is the author of fifteen books, including The Perils of Prosperity, 1914-32, Franklin D. Roosevelt and the New Deal, 1932-1940, In the Shadow of FDR: From Harry Truman to Ronald Reagan, The White House Looks South: Franklin D. Roosevelt, Harry S. Truman, Lyndon B. Johnson, The FDR Years: On Roosevelt and His Legacy, and Herbert Hoover. 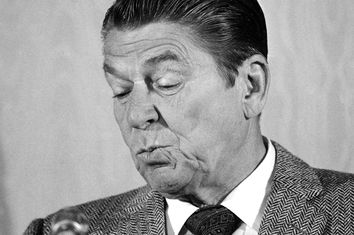 Behind the Ronald Reagan myth: "No one had ever entered the White House so grossly ill informed" William Leuchtenburg

Behind the Ronald Reagan myth: "No one had ever entered the White House so grossly ill informed" William Leuchtenburg
Page: 1