An old lover taught me the sexiest type of Thanksgiving cooking and how to do something sacrilegious and preposterous to a national symbol. 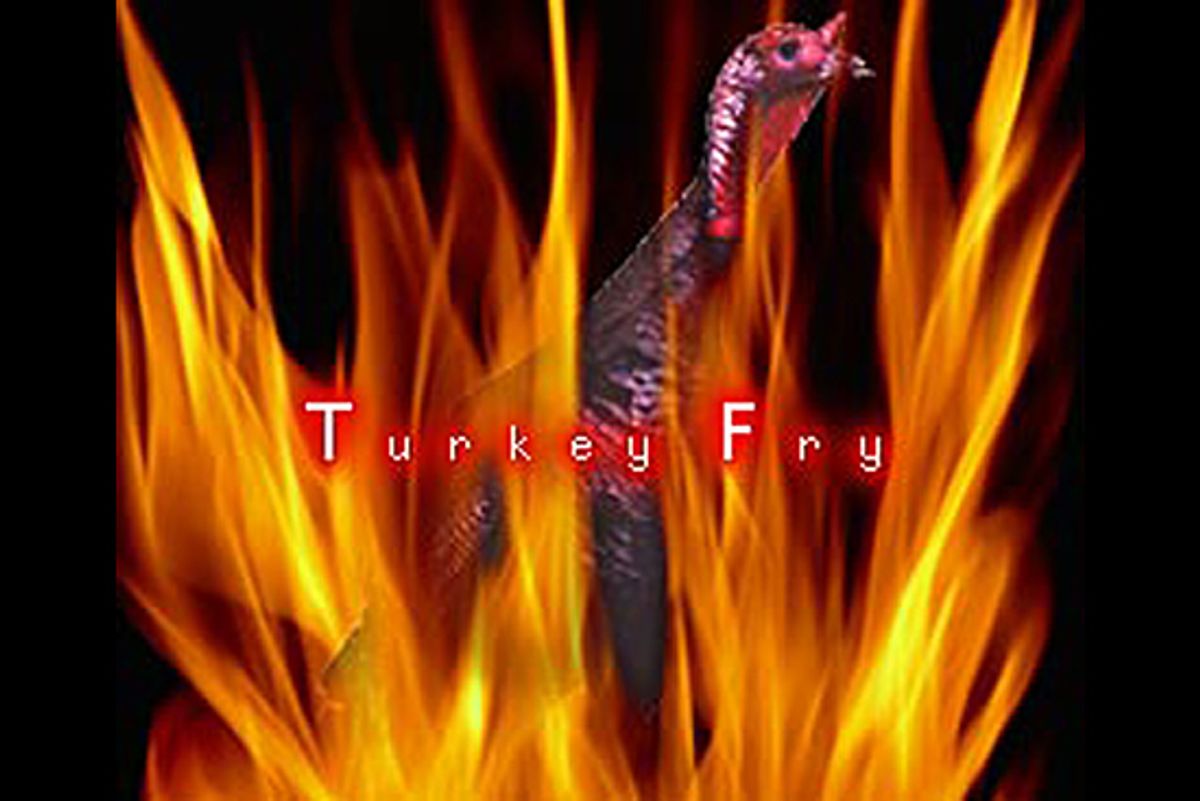 Some years ago, I found myself in love with a man who said he fried turkeys. At first I thought he was pulling my leg. I was a California girl, and we fry almost nothing out here. He would describe coating whole turkeys with Cajun spices and stringing lamp chain through their cavities. He described the dangerous volcanoes of boiling peanut oil as he carefully lowered the bird into a barrel-size pot set over leaping flames. He boasted of the crackly, spicy skin on his turkeys; the veins of scarlet hot sauce streaking the moist, flavorful meat.

It sounded, I thought, like the sexiest, manliest type of cooking -- a way of doing something really sacrilegious and preposterous to a national symbol. It turned out that frying turkeys was an underground trend among macho Southerners, outdoor cooking taken to its wildest, messiest extreme. I loved the idea.

But this man did not fry turkeys for me. He fried them for his wife and his children and their vast circle of friends. He would call me from his sport utility vehicle as he drove the back roads around his vacation home in the piney woods of East Texas.

Thanksgiving, New Year's, the Fourth of July. I would stand there in my tiny San Francisco studio apartment and imagine the crowds of friends, the bottles of bourbon, the hunting dogs, the wraparound porch, those stupendous, lusty fried turkeys. Twenty-six, 27, 28 -- I was the worst kind of sad little mistress, stuck in a state of chronic longing and jealousy. I wanted all those things he seemed to have in such abundance. I wanted children, I wanted money, security and success, dogs, a house in the loamy swamps of Texas. I wanted big, convivial holidays with fried turkeys. Who wouldn't?

Not a minute too soon, I hooked up with the man who would become my husband, and he did a pretty good job of rescuing me from this benighted condition. Soon I was cooking turkeys of my own. I roasted one for my in-laws on Christmas; I roasted a 20-pound bird for my family at Thanksgiving; I roasted a turkey two weeks before I gave birth to my daughter. I rubbed my birds with butter and stuck them into the oven. I basted them conscientiously with stock from a little saucepan in which I put the giblets and a stick of celery and carrot, like mother always did.

They always came out the same, my turkeys, whether I put them breast side down or breast side up, or turned them over halfway through; whether I stuffed them or didn't, whether I bought an organic turkey or a cheap Zacky hen. They were beautiful, plump, docile birds with oily dark meat and boring, dry white meat. My family liked my turkeys: They knew no better. But I did. No matter how elaborate the Thanksgiving I put on -- and I became famous for wild excesses -- this wasn't the turkey that was branded on my jealous soul. This was not the turkey I longed for.

It took several years, but one day it occurred to me that there was no reason a person like me could not fry a turkey. The first thing you learn if you ever become deranged enough to fry a turkey is that it requires equipment. A 10-gallon stainless steel pot. A propane gas cooker. Five gallons of peanut oil. Six feet of chain. The planning, I found, was part of the allure: A fried turkey is not something you casually whip up. It is something you plan as carefully -- and anticipate with as much alarm -- as a military campaign.

The night before that first turkey fry, my husband and little daughter went to bed and I found myself alone in the kitchen with two chilly 12-pound birds. I puried onions, garlic and butter with two large bottles of Tabasco and some Worcestershire sauce. I got the rudiments of this insane recipe from big, fat Paul Prudhomme's family's book on Louisiana cooking, and then I added a little more of everything to be sure my turkeys would be really dramatic. I had ordered a food injector from a shop in Louisiana, and again and again I filled that enormous syringe with sauce and stuck those animals all over. Some of the marinade puffed up under the bird's skin; the rest went deep into the soft, opalescent flesh. It was one of the nastiest, most sensual things I've ever done in a kitchen.

The following afternoon I set up the cooker in our placid rectangle of a back yard. I turned on the propane and lit the cooker. Gas leaked out and flames leapt along the hose. I turned off the gas and reattached the hose. At this point my poor husband suggested we call it off; he was a little afraid for me. He wasn't the one, after all, with something to prove. "Forget it," I said. I stood at that pot and watched the golden oil heat up to 400 degrees. Our bemused friends milled around eating potato chips as I crouched on the lawn and smeared those Cajun spices on the turkey with my bare hands. I threaded the first bird on a chain and we lowered it into the oil. Then I opened a beer. Thirty-five minutes later the turkey was done, and to my horror, it was a hideous thing. It looked profoundly fried -- shriveled and folded in on itself, dry, mahogany skin stretched tight over every skinny bone. I drained the turkey on grocery bags, we cut the thing up and devoured it. It really was the best turkey I've ever eaten -- juicy, spicy, intense. The skin was crunchy and piquant. It was turkey at its gutsiest and most sublime.

But let me say this: I can't remember the flavor nearly so vividly as I do the ecstasy of accomplishment. I called my old lover, the turkey fryer. I called him and boasted to him of the bird's crackly skin, the meat streaked with spicy sauce, how I'd done this all by myself. I could fry my own damn turkey.

Jennifer Reese is a writer living in San Francisco.