A Brazilian bikini wax changed Gwyneth Paltrow's life; it can change yours, too! 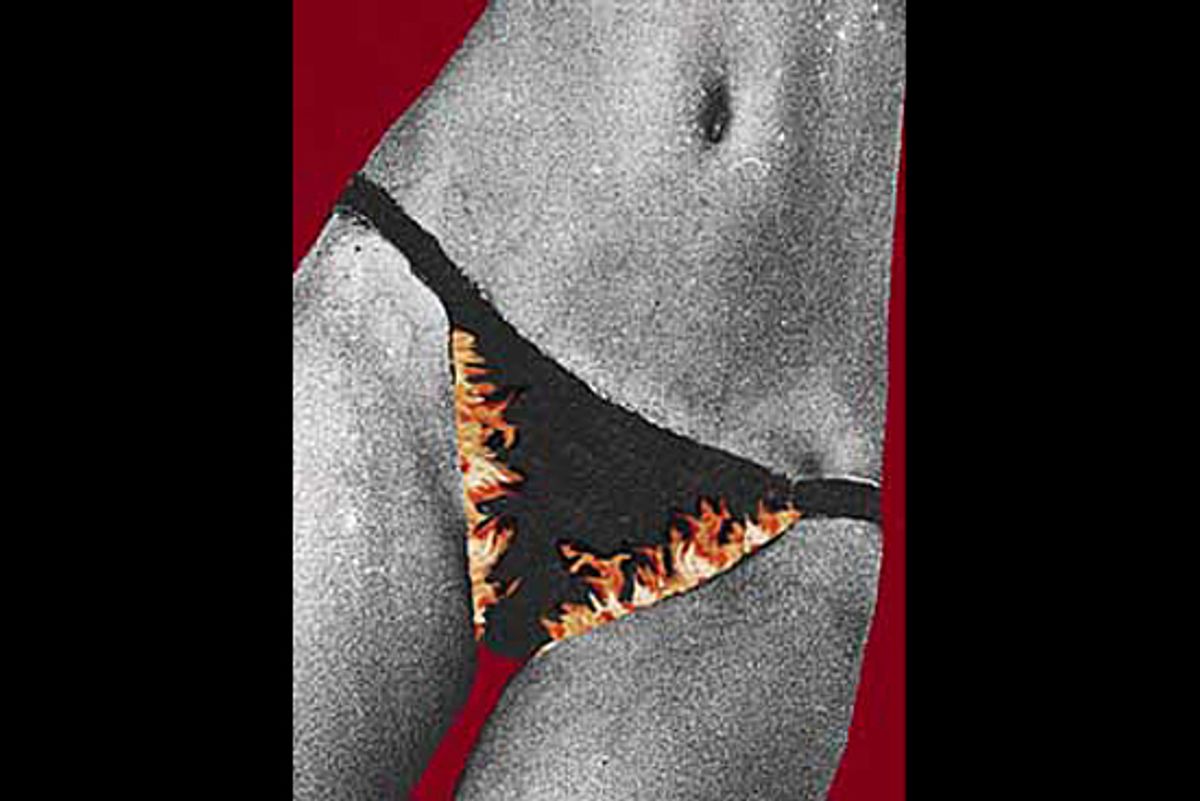 I am lying flat on my back, naked, holding my butt and legs up in the air while a middle-aged Brazilian woman peers at my crotch. She leans a little closer and moves her fingers between my flesh. While this is a position normally reserved for bedroom activities, it's business as usual at the J. Sisters International Salon in midtown Manhattan.

Celebrities love this procedure. Kirstie Alley has said, "It feels like a baby's butt, only all over." Paula Yates, the widow of INXS rocker Michael Hutchence, flies over from London to have it done (salons in the U.K. refuse to do it for hygienic reasons). The salon's walls are covered with celebrity photos and their signed testimony to the miracles of waxing. "You've ruined me for anyone else!" scribbled Jennifer Grey (or is she talking about her plastic surgeon?). "You've changed my life!" crowed Gwyneth Paltrow.

So I decided to see how a Brazilian bikini wax was going to change my life. I knew it was going to be a funky experience from the get-go. When I called to make an appointment, the "hold" music was the Wu-Tang Clan. And inside the salon, which is housed in an elegant townhouse on West 57th Street, thumping Brazilian music fills the air (probably to mask the screams of the clients).

I'm led into a small room by Juracy, my J sister of the day. She doesn't speak much English but she knows enough to tell me to take everything off and lie down. She runs her hands down my legs and pulls them away abruptly. "Ohhh, you shave!" she says, clucking and frowning at me in disapproval. She makes me feel like I've just been caught cheating on a test. "Well, I'm Mediterranean, you know, and shaving is just easier." The frown deepens. "You let it grow and come back see me in three weeks." This woman means business.

Juracy grabs my legs and bends them toward my chest, and plants a hand under each knee. It's hard to act nonchalant when you're bare-assed, twisted into a yoga position and giving a stranger a bird's eye-view of your nether region. As I'm concentrating on the cherubs and moldings on the ceiling (just like being at the doctor's!), Juracy spreads baby powder all over my crotch and butt. And I mean all over, inside and out. This woman is not shy about touching strangers. She tilts me up slightly, frosts my butt with warm wax and wham, bam, there goes the hair. I didn't even know I had hair down there. (Yup, everyone does. Butt waxing is part of what differentiates a Brazilian wax from a regular wax.) The pain isn't bad at all but I become alarmed when she grabs my labia, folds them back and spreads wax on them. Riiiiiiiip. I gasp and my eyes bug out. "Owwwwwww." Juracy grins.

She twists my body from side to side as she works her way up, and at one point my leg is thrown over her shoulder. I feel like she's going to cart me off to the woods, cave-man style. The waxing is over in about 15 minutes. Then Juracy goes over my body with tweezers, plucking stray hairs. And for the grand finale, she grabs my pubic hair between two fingers, pulls it up, gives it a good whack with scissors and dusts me off with more baby powder. I've been too afraid to look until now. I peer down at my body. It's a mess, glowing red and swirled with baby powder. Ugh.

I walk over to the mirror and once I get past the stricken look on my face, I see for the first time the magic Juracy has performed. My pubic hair has been shaped into a neat little upside-down triangle, with the point ending right above my lips, which are clean and smooth and bare. I feel like a 12-year-old, but a naughty, Lolita kind of 12-year-old. This is hot. Then the pain sets in. I can't think straight.

So why do women go through with this? "Part of it is the thong thing. It's not attractive if you're hanging out of it," says Suzanne Biallot, the company spokeswoman. Suzanne was being very polite. What it really boils down to is sex. Women get it done because it makes sex better. Jonice, the youngest J sister, offered her explanation to the New York Observer last year.

"Makes you sexy. Makes you fashion. When I don't have my bikini wax, I don't feel like to have sex with my husband. I feel dirty. And even himself say, 'Try a bikini wax!' I feel free. I feel clean. I feel sensuous even when I take a shower."

My friend Chad's girlfriend had one done recently so I asked him if, as with Gwynnie, a Brazilian bikini wax changed his life.

"I didn't think I'd get into the bald eagle look until my girlfriend surprised me with it," he said. "She made certain the lights were off and when I felt her it was like, oh my God, an unbelievably primal welling of emotion. First from the shock and then from the whole little girl eroticism of it. It's hard to describe. I guess it was like tasting forbidden fruit. Oral sex was definitely better because there was no hair to get in the way. Even regular old missionary position sex was better though too. Until she started growing stubble."

Sexiness aside, what about safety? Is it bad to remove all your pubic hair?

"Nope," says Dr. Sandor Gardos, a licensed clinical sexologist and all-around groovy guy. "We're not entirely sure what the purpose of pubic hair is. The best theory is that it helps trap pheromones, the odors that make you sexually attractive." He also pointed out that waxing is preferable to other forms of hair removal, like depilatories, which can be too harsh for mucus membranes.

When I explained the ins and outs of a Brazilian bikini wax to the good doctor, he was vaguely alarmed at the image of the aftermath. "Oooooooh, you're going to have some unsightly little bumps and it's going to itch like a motherfucker when it grows back. Not to mention that ugly 5 o'clock shadow." Thanks for pointing that out, doc. It's been a week since my wax, and so far I haven't gotten any ingrowns or bumps. Suzanne, the J. Sisters spokeswoman, suggested using a loofah to prevent ingrowns. A loofah? Is there no end to the Brazilian tolerance for pain? Ahhhhhh!

So as I was limping back to my office, I started to wonder what else can be done to pubic hair. Why is it that women can cut, dye, trim and straighten their hair, but not their pubes? Personally, I think everyone could benefit from a little trim now and then. Why not a special design for special occasions? Bring on the pubic hair topiary! Why don't we celebrate our pubes instead of yanking them out? In the '70s we did, or at least fashion designer Rudi Gernreich did. He gained notoriety designing the first topless bathing suit. But his last hurrah was perhaps the greatest -- the "pubikini," a sliver of fabric that wrapped around the hips and crotch in a V-shape to reveal a thatch of pubic hair dyed green. You can read all about in "The Rudi Gernreich Book" (Rizzoli, 1991), written by his model/muse, named, deliciously enough, Miss Moffitt.

Or let's say you get a Brazilian and are feeling a little breezy with the autumn winds coming along. My friend Ben tipped me off to merkins, or pubic wigs. They've been around since the 14th century, when randy aristocrats would wear them to conceal oozing syphilis sores. One man in London is single-handedly trying to bring about a merkin revival. Rick ("Muff Daddy") Stonell, owner of the Archive and Alwyn salon in London, offers a wide variety of custom-made merkins and a "full-service pubic salon." (They also do regular hair for the straight-laced types.) Stonell started with chin wigs and from there, it was a natural progression ... south. So the first question I ask Stonell is, "Why?"

"It's a body ornament, body furniture, really. We've gone through piercing, branding, shaving. People want something more natural," he says. Although what's natural about a fuzzy pink heart hovering between your legs is beyond me.

Stonell's merkins come in three sizes: small, medium and "Oh my God, bring out the bush whacker!" Customers come in for repeated fittings. "We don't mess around," says Stonell. They can be cut and dyed into any shape. His favorites include corporate logos, bull's eyes, stars and stripes, targets and love hearts. "We even had a lord come in and pick one out for his wife. We suggested the family crest. It's really all very interesting," he says about his line of work. That has got to be the understatement of the year.

The merkins are held in place by a transparent G-string or fastened onto pubic hair with adhesive glue. They're made from human hair, nylon, or -- no joke -- yak belly hair.

"I had a yak sweater once and it smelled when it got wet," I muse out loud.

"We don't have that problem," he replies.

I'm still wondering how a Brazilian bikini wax changed Gwyneth's life, but her publicist won't return my phone calls. Maybe it's the reason she broke up with Ben Affleck?

I can honestly say that waxing has changed my life, but not in the ways you would think. Just last Friday I was crossing the street with merkins on my mind and got hit by a cab. It smacked me in the leg and by some weird reflex I never knew I had, I jumped up on the hood of the cab so I wouldn't get run over. I'm staring the cabbie in the eye and the nice old couple in the back seat are horrified. I roll off the hood, finish crossing the street and buy a cup of coffee. After the adrenaline wears off I end up in the emergency room, where a cute scuba-diving fireman asks me out in the waiting room. So all is not lost. And by the way, the waxing hurt more than getting hit by the car!

Another note: Getting waxed is also like getting a haircut. No matter how good the hairdresser, you need a few days to get used to it and wash and style it yourself. I love my pubic crewcut even more after a week. Just walking down the street is fun because you glide. Running errands is a blast, and I would cheerfully walk 20 blocks for a cup of coffee. Plus, getting waxed is one of those hidden female pleasures, like wearing trashy lingerie under a business suit. It's your little secret that makes you walk around with a smile, and puts an extra swagger in your step.

So would I do it all again? You bet your merkin I would.