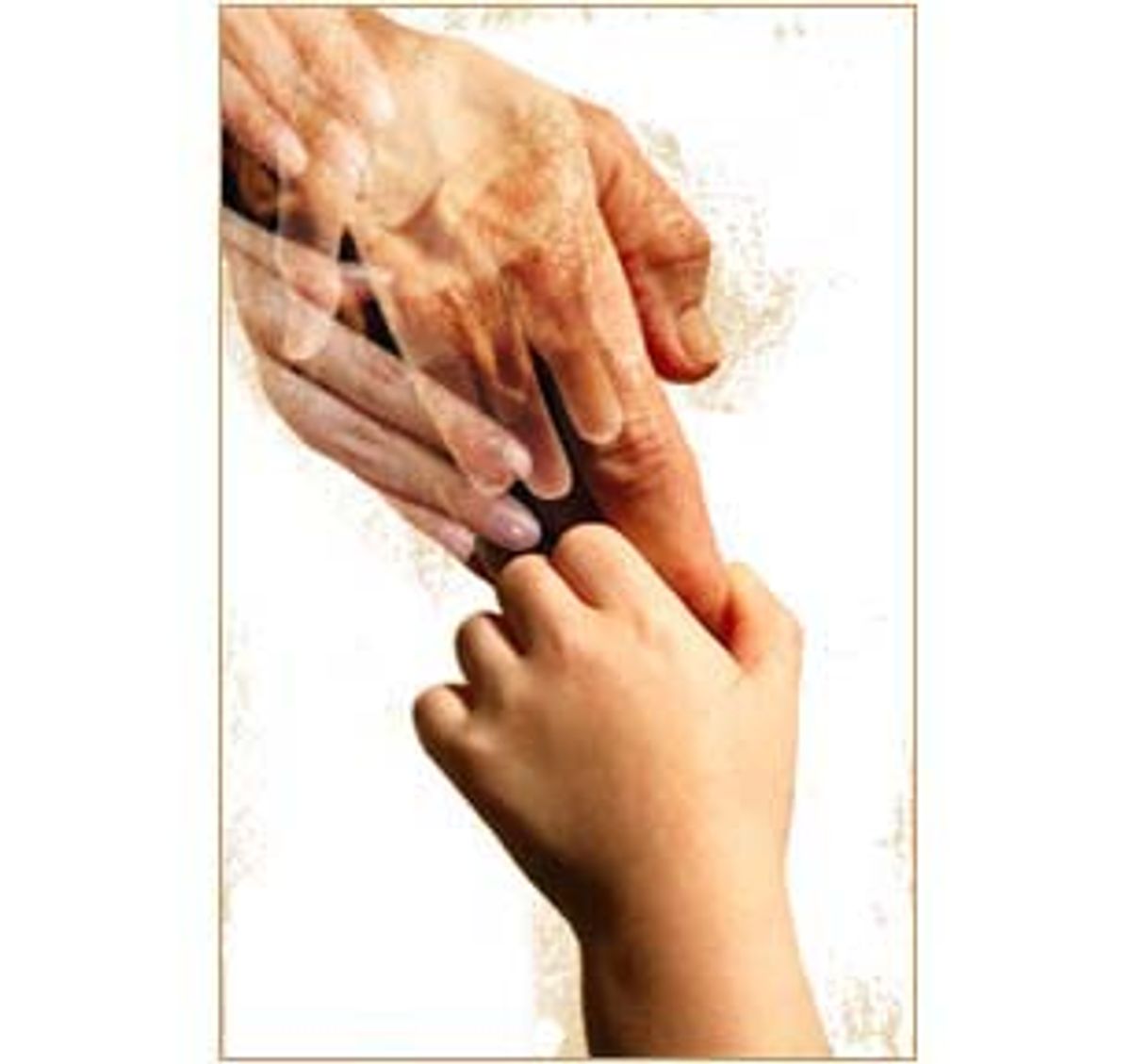 It's not often that I criticize Shakespeare. But in "Hamlet," when he had Polonius advise his son, "Neither a borrower nor a lender be," he could not have been thinking about children. Because borrowing and lending children, properly accomplished, brings pleasure to everyone involved.

Are you longing for a child in your life? Or, on the other hand, are you
longing for a break from your children? Like rain, jobs and phone calls, time
with kids is unevenly distributed. Too often, it's feast or famine. But while many distribution problems are not soluble -- food and money come to mind -- this one has a cure.

Twelve years ago, I was dying for a kid to hang out with. My three sons were
grown and my nest had been empty for several years. But my sons were not
ready to have their own babies and they reacted poorly to hints that I
wanted grandchildren.

My friend Margaret also missed the presence of children in her life, though
her situation was entirely different. Margaret had never had
kids and didn't expect to. Like me, she had moved to California many years
before, was divorced and lived alone. We had both so successfully escaped
from our East Coast families that we had no relatives on this side of the
country at all.

The people Margaret and I spent time with at work or on vacation were all
adults. But going to the circus or having Christmas parties with adult
friends seemed flat. There was no wide-eyed wonder, no begging for popcorn, no inquiries about how Santa Claus could possibly fit down a chimney. Though the two of us could have signed up as Big Sisters, we didn't feel like undertaking so serious a commitment.

We just wanted a kid to play with sometimes.

Margaret's friend Stephanie moved to California. A stressed-out single mom
who taught school, Stephanie had two delightful children -- a shy little boy
with big ears named P.K. and a hip, competent little girl named Pier, 3 and
5 years old. They had come here from Maine and, like us, they had no
relatives around. So Margaret and I began taking Pier and P.K. out for
occasional hamburgers or trips to the park. Stephanie was thrilled to have
some time off from being a parent, and we got our kid-fixes, the special joys
of being with the very young.

We had such a good time with Pier and P.K. that I asked two married friends,
also transplanted Easterners, if I could borrow their daughter, Laure, a
precocious, confident little girl, who was also 3. Since they had no
relatives nearby, they were happy to let her come along.

The kids took to this as easily as we did: They never showed the slightest
reluctance to go off with us, they never asked for their parents and they
never fussed. We loved having little ones to hug and carry around and play
games with -- and, of course, we always returned them promptly when we were
finished. Along the way, we added a few other children whom we especially liked, and some parents actually asked whether we would take theirs along too.
Sometimes we said yes, but only if we enjoyed those particular kids.

Our first outings included beaches and parks, pizza parlors and burger
joints. When December came around, I invited everyone to a tree trimming at
my house. By then, Laure was 4. Evidently, this was the first tree trimming she had ever been invited to and she had had to give it some thought. I
remember her opening my front door that afternoon, walking in and announcing
proudly, "I am Laure Katz and I am Jewish." Margaret and I had assembled
paints, cardboard, glitter and glue for the kids to make ornaments. Laure
used the materials to make Stars of David and menorahs.

A favorite event was the Cirque de Soleil. The kids were enchanted with
the contortionists and the clowns. I remember the thrill in the car when,
driving home from the circus one night, Laure and another kid in the back
seat named Matthew discovered that they had the exact same birthday. I also
remember a Halloween party when Laure, dressed as a small orange pumpkin,
leaped into my arms like a frightened baby monkey when a friend of ours in a
gorilla costume walked in the door.

For four or five years, we had great times. Then, as the kids were starting
to get too old to enjoy playing with us, everything changed. Stephanie, Pier
and P.K. moved away to Arizona. Margaret married and got a dog. My oldest son
married and produced two babies, the longed-for grandchildren. So the
Borrowed Children faded away.

But I am still close to Laure -- she had me as an honored friend at her Bat
Mitzvah and her parents consulted with me as she was choosing which high
school to go to. Laure's father, Steve, reminisced with me recently
about her time as a borrowed child. "Laure had no extended family here. Her mother and I were game for an aunt to appear. Instead, you appeared. You made an effort to
connect with her and the rest was easy. We had
wanted her to be comfortable with other adults and other children when we
weren't around, and that was something we couldn't provide without a
borrower."

Laure, now a high school freshman, was at first puzzled when asked how it
felt to be a borrowed child. "It was a ton of fun," she began slowly, "and a
break from my life. I got the chance to do stuff I normally wouldn't get to
do, like Christmas. It was a nice addition to my life."

From the time Margaret and I began until last month, I never heard of anyone
else borrowing children. But then I learned that someone I had known years was doing it. I asked her about it. It began, Ruth said, when a couple she knew had their first child. The new mother and father both worked very demanding jobs, so she started taking the baby, Joey, as a favor to them. "But then I realized I was doing it for myself," Ruth said. "I don't have kids, and this was a way to have them in my life. People say, 'Oh, that's so great for the kids, to have another adult around.' They don't always understand that I do this for myself."

Often, Ruth would plan an excursion, only to hear Joey say he
just wanted to go to the park and play, or go for a walk with her. "I don't
know how many hours we spent walking around his neighborhood, up to three
hours at a time, going up the little stairways and back streets and to the secret spots," she recalled. "In a lot of ways, that was more fun than some
scheduled event." Nine years later, she still borrows Joey, but these days
she is more likely to borrow his younger brother, who is 5 and not yet
occupied with play dates and computers. But Ruth still matters a lot to Joey.

"It's like having another parent, but she doesn't give you jobs and she
laughs a lot," he says. Then he adds, somewhat melodramatically, "Life would be bitter without her."

Thirty years ago, in the days when most fathers were exempted from
child care, I remember how isolated I felt with all the responsibility for
looking after my three small sons. It would have been a huge relief to have a
friend to borrow them and share in their lives. So if you would like some kids in your life, don't be shy. Ask a stressed-out parent or two if you can take their kids on loan. You could be doing yourself a big favor -- the genius of this system is that it works for everyone.