Three new guides to grammar and style approach the rules with a liberal informality and a healthy dash of humor. 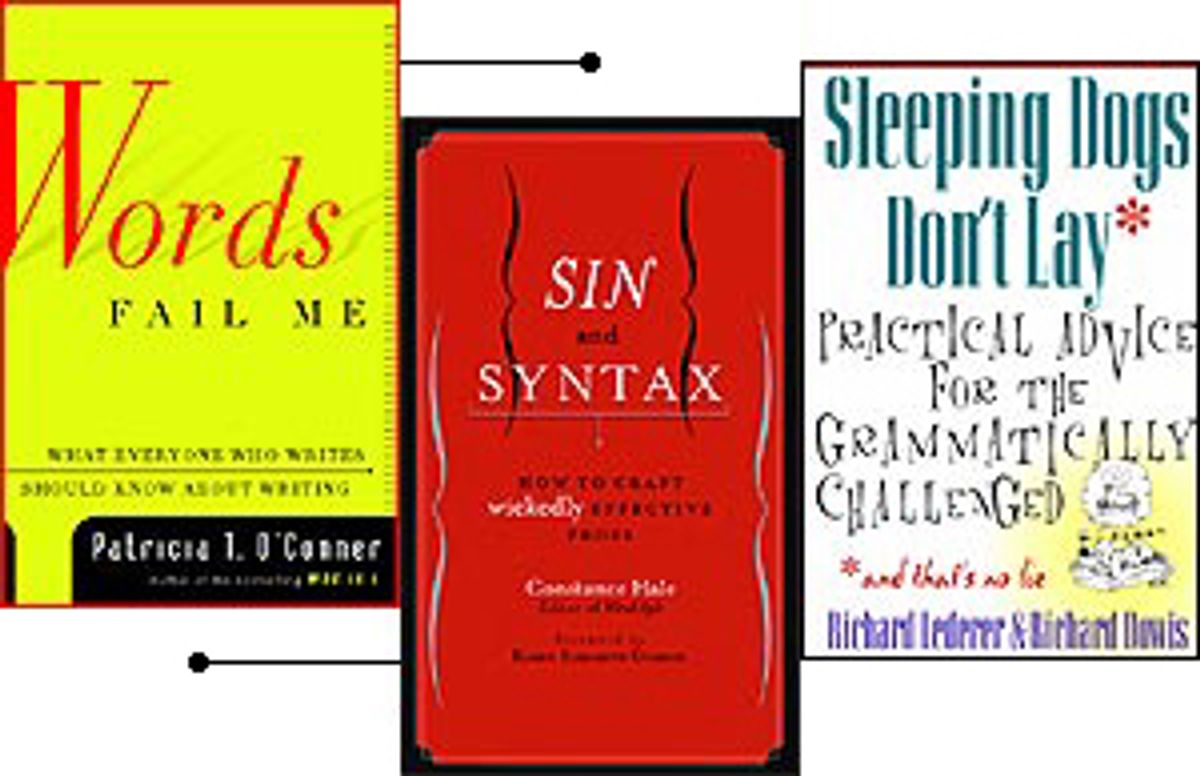 What is with grammarians and Warren G. Harding? The Teapot Dome scandal was apparently nothing compared to his dastardly insistence on using the word "normalcy" rather than "normality." It's damn near impossible to read an American grammar book without seeing our poor 29th president flogged for this sin -- which has trickled so far down over the past eight decades that "normalcy" is now the preferred term in many dictionaries, including the one Salon uses.

Get over it, people! Is "normalcy" really so bad? Why, it's even one letter shorter than "normality" -- it saves space! And is anybody really, I mean really confused by its use? (Just last month, Jared Bjornholm responded to an article in Salon with a letter to the editor in which he wrote, "I assume by 'normalcy' that [Norah] Vincent meant 'normality,' but the slip is illuminating." Jared, buddy: Your hat's too tight!)

That kind of pedantry tends to drop grammar types off the A-list at party time, but things are looking up for those of us who feel passionate about the language (I nearly got into a fistfight over hyphen usage this week) but don't want to live in the world of Mrs. Higginbotham, the eternal English teacher, with her sentence diagrams and her pointless rules about not splitting infinitives. Three new guides to grammar and style use a breezy, conversational voice, a liberal approach to the rules and a drop of humor to maybe try to learn you something about putting words together.

"Words Fail Me " by Patricia T. O'Conner, a former editor at the New York Times Book Review, is the most useful of the bunch for the non-professional writer, at whom it's aimed. O'Conner is one of those sneaky-good writers: You don't see the effort behind her smoothness, and it's easy to miss the little gems she drops in. In a section on how rhyming modifiers can make for a pleasing echo effect ("nicely spiced") but more often create an annoying singsong, she lists some combinations that probably sounded good once but have become clichis ("brain drain," "gender bender"), then asks, "Are your ears ringing yet? The lesson is listen." Lovely.

Little bell-ringers that please dorks like me aside, O'Conner's strength is that she keeps making the point that the key to writing well is thinking well. If you're clear about what you want to say and you pay attention to the way you say it, you'll probably do all right. She walks you through the common errors and coaches you on how to avoid them, without beating you down with complicated terms and rules.

Constance Hale, in "Sin and Syntax," aims more at the pros. (Full disclosure: I used to work with Connie Hale. We're not close friends, but she has my phone number and I've met her dog.) Hale, who edited "Wired Style," takes off from the idea that once you've learned the rules, you'll know when and where to break them or at least bend them. I agree, and the book is a good primer on the basics. Each section is divided into four parts, with 1) a little grammar lesson, 2) a writing lesson and examples of rule-breaking both 3) awful and 4) sublime.

Hale's winking, "aren't we just so wicked!" tone kinda bugged me, and I'm not sure that it helps me as a writer to know her opinion of car names -- especially since I disagree: I think "Acura" sucks as a name for a car, but I would buy a ride called the Dictator, thank you very much. Plus, she flogs my boy Harding (and diagrams sentences!). But she's good at explaining rules, and she provides a lot of examples of writing that really is sinfully good. Osmosis alone should help you here.

"Sleeping Dogs Don't Lay" by Richard Lederer (more disclosure: He's a former Salon contributor) and Richard Dowis is the goofiest of these three books. Lederer and Dowis use cartoons and little quizzes to show you common errors and how to avoid them. They take a scattershot approach: The first chapter starts out with the titular lie/lay problem, then moves on to who/whom, that/which, I/me/myself, double negatives, subject-verb agreement and several other issues. English is such a huge and complicated monster that at some point there's no choice but to rely on an "and then there's ..." method, but such an approach doesn't make for a book that's as cohesive and easy to follow as either "Words Fail Me" or "Sin and Syntax." It's a fun read, though, and you'll learn something. And unless I missed it, Lederer and Dowis lay off Warren G. Harding.

DO NOT USE. use king kaufman byline and bio.